Just how extreme is creationism? You might be surprised.

If you were presented with two words, dinosaurs and creationism, and asked to think of an iconic image, I bet many of you would come up with the same visual: a triceratops with a saddle from the Creation Museum in Kentucky. 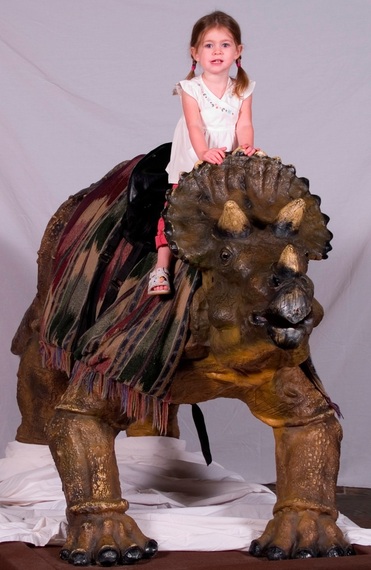 But if you thought that this image was a serious reflection of the beliefs of those who created the Creation Museum, you'd be wrong, according to Ken Ham, the museum-cum-theme-park's director. Way back in 2009, Ham was already pushing back against the belief that the Creation Museum was promoting a world in which dinosaurs had saddles. In an essay entitled "Dinosaurs and Saddles" he criticized Charles P. Pierce, the author of Idiot America, for promoting such rubbish.

Ham quotes Pierce, in the introduction to Idiot America, as describing a visit to the Creation Museum as follows:

The whole group then bustled into the lobby of the building, where they were greeted by the long neck of a huge, herbivorous dinosaur. The kids ran past it and around the corner, where stood another, smaller dinosaur. Which was wearing a saddle. It was an English saddle, hornless and battered. Apparently, this was a dinosaur that performed in dressage competitions and stakes races. Any dinosaur accustomed to the rigors of ranch work and herding other dinosaurs along the dusty trail almost certainly would have worn a sturdy western saddle. This, obviously, was very much a show dinosaur.

Ham goes on to defend the museum by saying:

First of all, here are some photographs from the actual Creation Museum dinosaur exhibit -- note there are no dinosaurs with saddles [I've not reproduced the photos but you can view them at the link above. Trust me, there are no saddles present!]

Secondly, not as part of an exhibit, but as a fun thing for kids to do, we do have one sculptured dinosaur with a saddle (sculpted by Buddy Davis, and he also made the saddle) that is used for a fun activity for kids to climb on and have their photographs taken -- no different to what you see in certain theme parks and other secular venues. [Photos omitted here as well, but the iconic one above is one of the three that Ham references.]

Ok, so let's accept Ken Ham's argument that his theme park doesn't intend to teach impressionable kids that humans rode dinosaurs. What there can be no confusion about, however, is that the museum absolutely does teach that dinosaurs and humans coexisted approximately 6,000 years ago and that the coexistence was a peaceful bucolic one. Here's a video of some animatronic dinosaurs at the museum cavorting next to a child tending a fire:

Ok, so let me return to my original question: Just how extreme is creationism? Well, there's an outgrowth of the "dinosaurs and saddles" kerfuffle that has burst on the scene in Scotland that is far more extreme. Members of a young Earth, fundamentalist Christian sect from the United States have found their way to Scotland and have been promoting their beliefs in a public elementary school. Part of their missionary work has been to distribute "science" books to the students.

One of the books, Truth be Told by Kyle Butt and Eric Lyons, professes to rebut most of modern biology, geology and cosmology. While it's not worth exploring the book's outrageous errors here (but see a detailed critique written by Paul Braterman if you want to undertake such an exploration), what is relevant is that the book presents a piece of "art" that puts the iconic picture of a dinosaur with a saddle to shame. Rather than attempting to describe it, take a look for yourself: 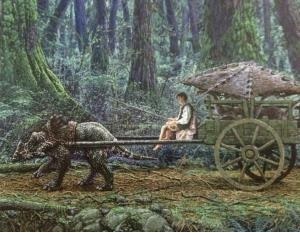 Because of actions like this in Scottish public schools, a petition is being presented to the Scottish Parliament to bar the teaching of creationism in any of its forms as an alternative to evolution in any school supported by public funding. The petition follows similar action and success in England where the Department of Education has just mandated that evolution must be taught as part of the science curriculum while creationism may not be included in that curriculum.

A recent Huffington Post article announcing the English decision noted that while creationism will no longer be permitted in English schools, "Thousands of schools in America that received public funding still teach creationism as an 'alternative' to evolution."

Perhaps the Scottish Parliament will act and remove the dinosaur-drawn cart from science classrooms. And maybe we can make some progress on the "thousands of schools in America" that are comfortable with that image.