The National Endowment of the Arts (NEA) announced 59 new grants this week that will help American communities prepare themselves for the new economy.

Together with ArtPlace, a non-profit composed of the NEA, and major philanthropic institutions who have traditionally funded the Arts, the nation's largest banks, and eight federal agencies, communities are reinventing their downtown and neighborhoods.

Three years ago, Rocco Landesman, former Chair of the NEA began looking for ways to energize communities, encourage community-wide partnerships, and what he called the "integration of public art into civic spaces."

We believe...that there is an element of our grant programming that has been missing; an element that is particularly important today. This is, of course, the "Our Town" initiative...built upon solid fact-based research...personal first-hand observations, and the recognition that all Americans have an investment in the places they live.


Initially, NEA spent about $5 million to support the Our Town program supporting initiatives such as " the mapping of a cultural district; the integration of public art into civic spaces; a community waterfront festival; affordable housing for low-income artists; rehearsal spaces to serve as research and development space for our performing arts companies; (and) outdoor exhibitions and performances to enliven civic spaces and engage citizens."

Today, NEA's grants, according to Acting Chairman Joan Shigekawa, are in "36 states totaling $4.725 million to fund projects that engage the arts to help shape the social, physical, and economic character of communities. Since the Our Town program's inception in 2011, the NEA has supported 190 projects totaling more than $16 million in all 50 states and the District of Columbia." 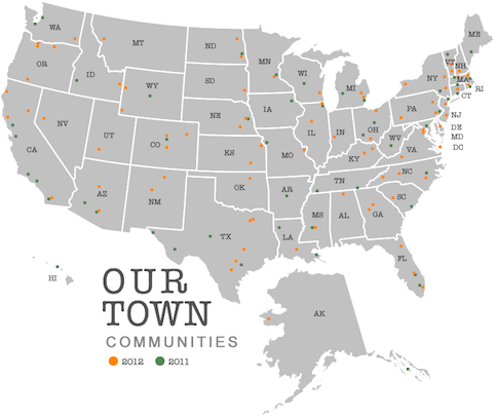 Importantly, "Our Town" has been warmly embraced by communities across America and started a revolution of sorts, by engaging a significant number of players in the community to collaborate on how, where and what they might develop that would better serve the people who lived and worked in the region.

• A systemic approach to civic development and a persuasive vision for enhanced community livability.

• Clearly defined civic development goals and objectives that recognize and enhance the role that the arts and design play at the center of community life.

• An action plan aligned with the project vision and civic development goals.

• A funding plan that is appropriate, feasible, indicates strong and wide community support, and includes a well-conceived strategy for maintaining the work of the project.

• Artistic excellence of the design and/or arts organizations, designers, or artists involved with the project.


ArtPlace was designed to complement the NEA grants by pooling arts funding from the private and non profit sector to make cities and towns in rural areas creative places-- "creative placemaking" as it is called, a term coined by Ann Markusen and Anne Gadwa Nicodemus, authors of a white paper by the same name.

Earlier this year, ArtPlace announced that fifty-four organizations received a monetary award to support their work for a total of $15.2 million. The funding covered 54 projects in 44 communities (and a statewide project in the state of Connecticut).

While the mission is similar to Our Town in that it too, seeks applications from arts organizations, artists and designers working in partnership, it is very clear that the intent of ArtPlace is to increase "the desire and the economic opportunity for people to thrive." All the proposals to ArtPlace must have "a transformative impact on community vibrancy."

At a time when creativity and innovation have become key indicators of success in the new knowledge based economy, the architecture--the look and feel-- of our cities is a vitally important measure of how a city sees itself, and how well it is meeting the challenges of a very new age. These are the essential ingredients to nurturing, retaining and attracting the creative workforce America needs.