Over 150 wear hoods, walk out during former AG's speech

The architects of the War on Terror are war criminals who should be resisted and rejected at every opportunity. Dozens of organizers in Ithaca, New York decided to put this belief into action when we heard that former Attorney General John Ashcroft was coming to speak at Cornell University on November 29.

The result? At Cornell University on Thursday, over 150 people expressed their resistance to the policies of John Ashcroft and the War on Terror through creative, silent protest. Over 70 placed hoods on their heads, stood and turned their backs to Ashcroft when he tried to justify his repressive actions post-9/11. 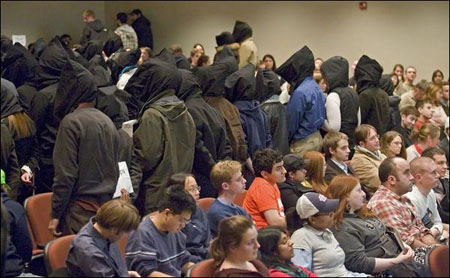 After 15 minutes of standing silently, representing the detainees who were arrested and imprisoned without due process under Ashcroft's leadership, all of the hooded figures and many others left the room. 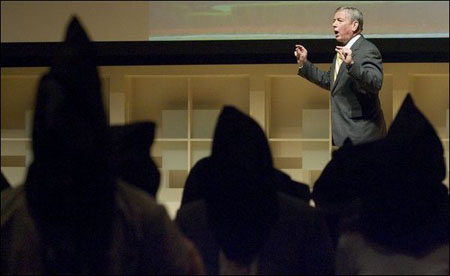 Thus far, the event has received some favorable press in local newspapers and in AP story picked up in New York and Vermont. The Ithaca Journal ran a front-page spread with great pictures, while Newsday in Long Island ran a brief article. The coordinated action was a result of several meetings among student leaders and community activists. Our goal was to present a powerful, critical response to Ashcroft's PATRIOT ACT and other oppressive policies. We wanted to engage as may people as possible in creative rebellion. We looked at examples of prior demonstrations including the Columbia protest of the Minute Men, as well as protests of Alberto Gonzalez and other Bush Administration officials. We discussed the most likely attack on our work: i.e., that we would "suppress free speech" by protesting.

Ultimately, a coalition of labor organizers, liberals, hippies and radicals managed to reach consensus on this direct action. We stretched the limits of our "campus code" regarding dissent and presented an example of what unified action can achieve. All of us are excited about the result: We owned the room for 20 minutes. After we stood up, Ashcroft stammered and said he did not know what to do. Only after the campus Republicans shouted, "Keep going!" did the former AG attempt to regain his flow. We stood silently, disciplined and determined, forcing the crowd to consider the victims of Ashcroft's oppression. (See rough cut of the action here.)

We hope to inspire similar resistance wherever these architects of oppression go. Please spread the word - resistance lives!