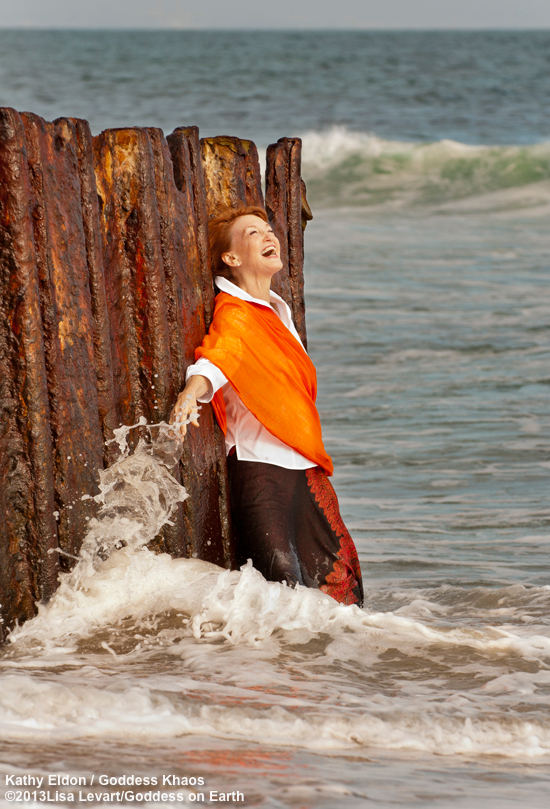 Anarchy. Pandemonium. Disarray. These are just a few of the synonyms for the word, "chaos." But buried even deeper in chaos's etymology is a sacred myth -- that of the Goddess Khaos. Khaos (or Chaos) was one the Greek primeval goddesses and gods to emerge at the creation of the world -- her name literally meaning, "the gap, the space between heaven and earth." The universe was born, this story tells us, out of a chaotic mix of primeval elements. Perhaps it is this fundamental commotion that Friedrich Nietzsche referred to when he wrote, "One must still have chaos in oneself to give birth to a dancing star." He could equally have been channeling the forces that have inspired the life and work of activist/journalist Kathy Eldon.

I was made aware of Kathy's work by watching a video of her addressing the Forbes Women's Summit of 2013. She spoke of the period of time after her 22-year-old son Dan, a photojournalist working for Reuters in Somalia, was stoned to death by an angry mob. She was broken. But from this dark place of anarchy, she found the strength and power to establish, in his honor, the Creative Visions Foundation -- an organization that fosters activists and artists who shine light on social causes. It's not about the individual, she said in the Forbes talk, it's about collectively coming together: "When we listen, we cooperate, we collaborate and we co-create."

Kathy's boundless energy, vibrant passion and deep reservoir of humanity radiate out of every pore in her body. When I later heard her speak at The Herb Albert Educational Center in Santa Monica, her authenticity brought the audience into a cohesive tribe of creative brethren. Kathy's ceaseless excitement for life has helped enable, with Creative Visions, the realization of over 200 trailblazing projects through the provision of resources and critical guidance.

We met to co-create Kathy's goddess portrait at a beach near the Creative Visions offices in Malibu, California. On choosing to portray the Goddess Khaos for Goddess on Earth, Kathy wrote:

To the distress of those around me, I often appear to be surrounded by chaos. Until I read the Nietzsche quote, I thought this was a terrible thing. Now I embrace the disorder as a vibrant space of pure potential, perfectly suitable for birthing a dancing star.

In the Heart of Life is Kathy's new, soon-to-be-published memoir. Comedian and actress Rosie O'Donnell writes of the book: "Kathy inspires women to believe that they can do more than simply survive: they can thrive and passionately create the lives of their choice." Indeed, let us all be inspired by Kathy's vision and the powerful Goddess she has chosen to embody -- and hold a space for the potential that lies within disorder and chaos for unbounded creativity, inspiration and transformation.

Photographer/ Artist / Author of Goddess on Earth; Portraits of the Divine Feminine