Salvador Dalí's unique paintings might be explained by his eccentric personality; Wassily Kandinsky's eye for color might be explained by synesthesia. We tell these stories about artists because the idea of the creative genius is appealing, but might creativity be a more formulaic process than we've imagined?

Ahmed Elgammal, associate professor of computer science at Rutgers, co-built an algorithm to quantify creativity, ranking art history's paintings based on their originality and impact. The findings weren't entirely surprising; Mondrian, Malevich and others whose works are mostly composed of geometric shapes ranked higher than Pissarro, Cézanne, and even Picasso, whose works often build upon or subvert more traditional figures and subjects. Georgia O'Keeffe's flowers -- more abstract representations of the objects than have been popularly depicted before -- ranked higher than Degas' Parisian city-dwellers.

According to the formula, the artists who've spawned the most creative paintings of all time include Edvard Munch (of "The Scream" fame), Chuck Close, and M.C. Escher. 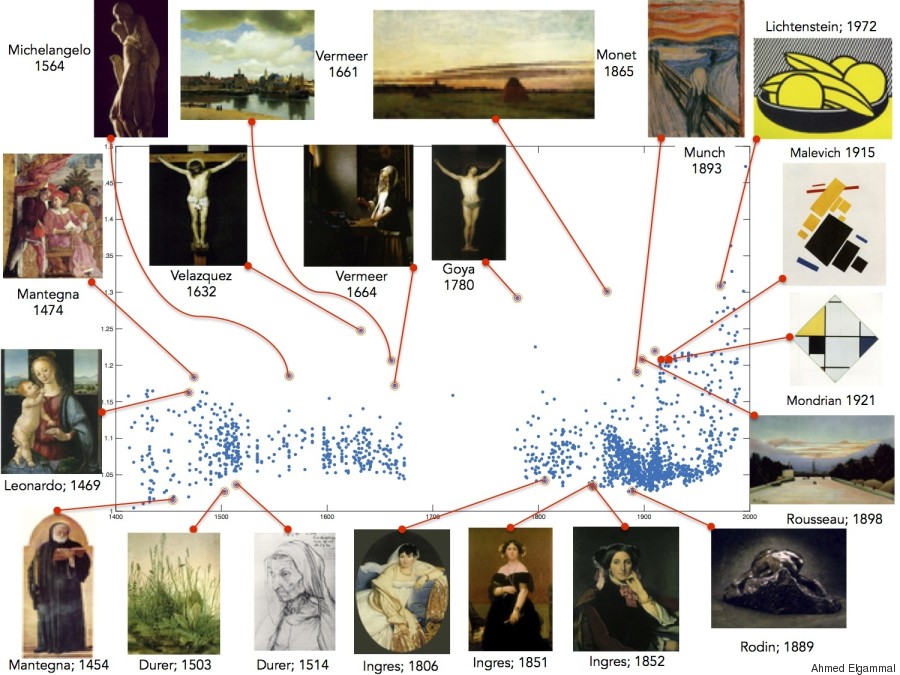 But, the algorithm isn't perfect -- in order to successfully judge creativity, its creators first had to choose a definition for the word and run with it. Rather than focusing on say, psychological creativity, or the creativity of individuals, they stuck with determining whether specific works were historically significant. The factors considered were whether a piece was "original" and "influential." So, just because "The Scream" is judged more historically impactful than "Starry Night" doesn't mean Van Gogh was a less creative thinker than Munch.

The goal of the study, according to Elgammal, was to build a machine that could judge the significance of an artwork the way a learned human might. He told The Huffington Post in an email, "the ultimate goal of the AI research is to make machines that have perceptual, cognitive, and intellectual abilities similar to those of humans. We believe that analysis of art and judging creativity in art are challenging tasks that combine these three abilities."

His analysis of the results included, Elgammal wrote, "elements of arts such as space, texture, form, shape, color, tone and line. Artists also use principles of art including movement, unity, harmony, variety, balance, contrast, proportion, and pattern; besides brush strokes, subject matter and other descriptive concepts [Fichner-Rathus, 2008]. We collectively call these concepts 'artistic concepts.' These artistic concepts can, more or less, be quantified by today’s computer vision technology."

So, along with performing administrative duties and writing poetry, robots are, apparently, becoming art critics. Still, Elgammal says he hopes to use a more refined version of the algorithm to assist human experts, not replace them. "I hope to work with art historians to use this algorithm to get a better understanding of the parameters behind creativity through history," he said.

View more results from the algorithm to see which paintings are considered the most historically creative.