We tend to think that creativity is innate -- you've either got it or you don't. Our "creative type" friends are artsy, full of wonder and always wanting to dig into something deeper. The rest? They're investment bankers.

Contrary to popular belief, no one is born without a creative bone in his or her body, and not all creative types are starving artists. In other words, we've all got it, but our personalities play a role in the kind of creative we are, and how we best feed into it.

"Our creative process is how we see the world and how we make decisions," David B. Goldstein, artist, researcher, management consultant and the co-author of Creative You: Using Your Personality Type to Thrive told The Huffington Post.

While we might typify creativity, Goldstein says this is limiting. "There's more than one way to be creative -- everyone is creative and can be creative in their own way."

In his book, Goldstein reveals 16 different paths in which people can unearth their creativity, all of which depend on their psychological preferences. The author connects the personalities dictated by the Myers-Briggs Type Indicator assessment, a test developed on the basis that we all have particular preferences in the way we translate our life experiences and values.

Since many of us still think of creativity as a rote personality type of its own, there's a lot about the phenomenon about which we're misinformed. Below, find five creativity myths that, hopefully, once you see past them, will unleash your inner creative genius. 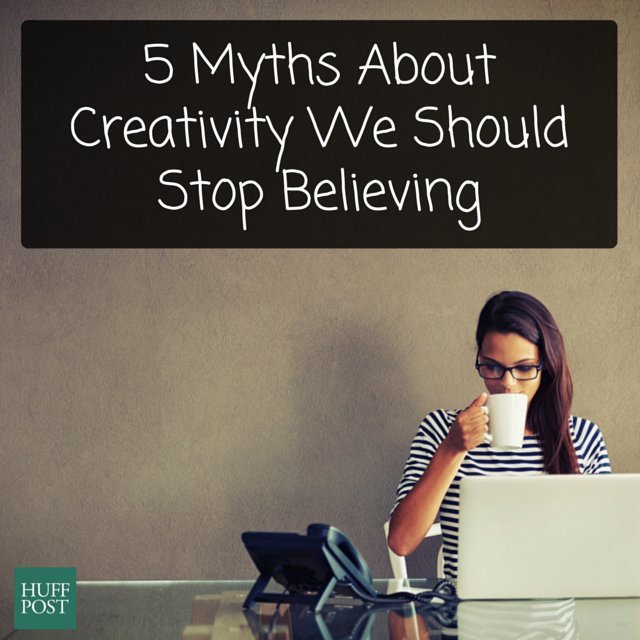 1. Stepping "outside of your comfort zone" is the best way to elicit creativity.

"Creativity comes from finding our comfort zone and standing in it," Goldstein says. "When we're comfortable and acting in our preferences, we have the courage to take risks." The artist explains that when you're not comfortable, you're less likely to take the risks that could lead to that bright idea.

Plus, some of our best ideas come in the most unexpected places -- like in the car driving home -- where we feel mighty comfortable. These physical locations aren't new to us, but they give our minds the "OK" to wander. As Woody Allen recently told Esquire, his creative thoughts brew best in places like the shower. "It's the change of venue, the unblocking the attempt to force the ideas that's crippling you when you're trying to write."

2. Brainstorming sessions are the best ways to come up with brilliant ideas.

Some, namely extroverts, feel most alive when surrounded by a group of people. But this is not the case for all -- especially the introverted types who experience a sense of draining when they're around others for too long, Goldstein explains. The trick is to find what setting works best for you. "Often for an introvert, their best ideas come when they’re driving home," says Goldstein. And that could have huge implications for creativity in the workplace.

3. Being creative means being spontaneous.

Some of the most inspiring, creative works came with a set of plans. Painter Henri Matisse, for example, constructed all of his paintings before he began. He even wore a suit and tie while he created -- not exactly the splattered, ragged overalls we associate with artsy folk. Edward Hopper and Norman Rockwell were also big planners, says Goldstein, who admits to meticulously strategizing the layout of his paintings before he puts the brush to canvas.

4. Creative people must invent something new.

Only 30 percent of the population have the personality of the "intuitive types." These are the Einsteins and the Edisons -- big picture thinkers who create something out of nothing. (The lightbulb, for example, did not exist until Edison decided it should.) Goldstein says these kinds of thinkers are abstract and impractical -- they contemplate the future and solve "future problems."

And yet, the "sensers" -- the majority of us -- aren't any less creative, just a different kind. Sensers create by combining existing ideas. Think of Henry Ford, who didn't invent the car, but thought up many ways to improve it.

Of course, a person isn't necessarily strictly a senser or an intuitive: "There's an overlap," Goldstein explains. "The intuitives can pay attention to detail and do think in the moments, and sensers can look into the future and see the bigger picture."

5. Creativity means having a finished product.

You don't need to create something worthy of display to be considered creative. Those with a "perceiver" personality type tend to never see things as entirely complete, because they're always inspired to add more. "If you're a perceiver, you prefer endlessly modifying, editing, repainting and revisiting since there is an unlimited and continuous flow of data to consider," Goldstein writes in his book.

Picasso, undoubtedly a perceiver, had strong feelings about this: "To finish a work? To finish a picture? What nonsense! To finish it means to be through with it, to kill it, to rid it of its soul."