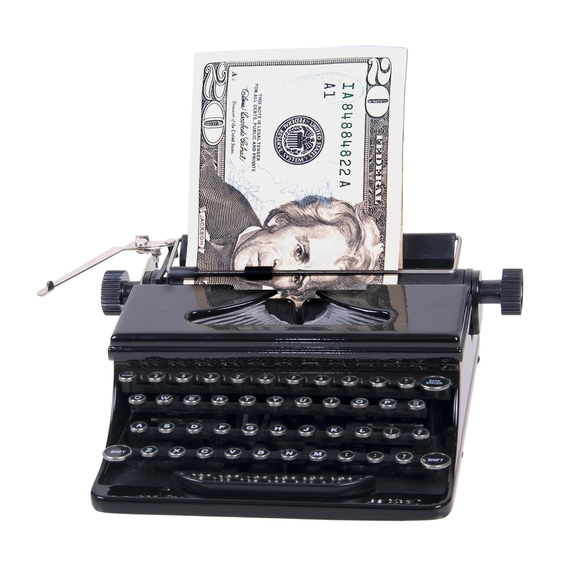 One of the greatest biographies ever written was James Boswell's The Life of Samuel Johnson. In the biography is a quote by Mr. Johnson that many writers repeat ad infinitum: "No man but a blockhead ever wrote except for money." I must confess that, as per his universal claim, I am that blockhead.

Giving the benefit of doubt to the great Mr. Johnson, I do believe he meant something far more subtle and layered: writing, after all, is a broad term. It is a skill that applies to many, many occupations, including journalists, copywriters, screenwriters, commercial writers, and non-fiction and fiction writers in all categories.

The Dance of the Coin

My definition of what constitutes "writing" is fiction literary writing: the novel, the short story, the play, the poem, the kind of writing that is often referred to as an art form. Those of us who are readers have no trouble with that definition and can easily provide a long list of suitable authors and books.

If this is what James Boswell means when he refers to "writing," then I must respectfully take issue with him, because he is suggesting that literary writers can avoid blockhead status only when they are paid for writing.

Must literary writers, including myself, quell the urges of our pen unless and until it includes a monetary transaction? Does he mean that a literary writer should not be published unless they are paid for it? This implies that our writing must be bought before it qualifies as real writing.

Believe me, I am not against other writers performing their art exclusively to the dance of the coin. If I followed that course, I may have greatly enhanced my personal wealth. My assertion is that no literary writer who respects their art should consider money as their first objective.

My Failure (Or Not)

My failing, I suppose, is that I just can't "write to order." It violates my DNA. I confess I have tried to do it in the past with very spotty and unsatisfying results. The fact is that I, along with many of my fellow writers, have found that we can only write what we want, when we want, and how we want. Thankfully, I had discovered this preference early on, and I have spent the better part of my life writing works dictated to me by my personal muse. If others are willing to pay the price of reading my material then fine. If they are not willing to pay the price for my writing, but want to read it just the same, there is a vast network of libraries available. I might cry in my gut, but never show a shed tear.

Back in the Day

Much of my work has been with novels. In my early days I worked with publishers on the proviso that I first suggest what I want to write, and then I write it.

Early in my career the wonderful Editor in Chief of Putnam, the late beloved Clyde Taylor, picked my second novel out of a two-paragraph mass mailing, and asked me to send it on. Its title was Banquet Before Dawn, a story of gentrification in Brooklyn in the sixties. He published it with little changes. It was not a bestseller, by far, but the satisfaction of seeing it published was enough.

Taylor also supported my yet-to-be-written book Trans-Siberian Express, through the exchange of the following dialog:

Me: "I want to write a love story that takes place mostly on the Trans-Siberian Express, the longest rail journey in the world, which goes from Moscow through Siberia to the Sea of Japan."

I remember him biting into his sandwich, chewing for a moment, and then saying: "Write it."

He did arrange an advance, not very much if I recall, but that, for me, was simply a token bonus. I would have written it anyway.

Ironically, it was immediately bought for the movies for the munificent sum of $225,000, a bonanza in those days. As it happens, it went into development hell and never reached the silver screen. But it did get published all over the world and continues to be read to this day. It is having a resurrection through digital publishing, which I embraced in the late nineties when the rights to all of my published novels were reversed back to me.

I know my opinion will not be universally hailed. As they say, we don't live by money alone, but we can't really live in our contemporary society without it. The image of the uncompromising starving artist composing in his or her cold garret is a classic example that illustrates the fearful fate for the unrecognized and unheralded. I doubt if such an outcome ever inhibited the true artist, whose real nourishment comes from their work.

For those of us who aspire to the high art of literary writing, similarly to painters, composers, musicians, and others who prize, above all, discovering insight into the human condition, we will always put creation over the clink of coinage. It is, of course, a romantic notion, and I have a feeling that James Boswell's blockhead assertion would not have applied.

All things considered, what are your thoughts on the struggle between commerce and creativity?

Warren Adler is best known for The War of the Roses, his masterpiece fictionalization of a macabre divorce turned into the Golden Globe and BAFTA nominated dark comedy hit starring Michael Douglas, Kathleen Turner and Danny DeVito. In recent development are the Broadway Production of The War of the Roses, to be produced by Jay and Cindy Gutterman, The War of the Roses - The Children (Grey Eagle Films and Permut Presentations), a feature film adaptation of the sequel to Adler's iconic divorce story, Target Churchill (Grey Eagle Films and Solution Entertainment),Mourning Glory, to be adapted by Karen Leigh Hopkins, and Capitol Crimes (Grey Eagle Films and Sennet Entertainment), a television series based on his Fiona Fitzgerald mystery series. Warren Adler's newest thriller, Treadmill, is officially available.