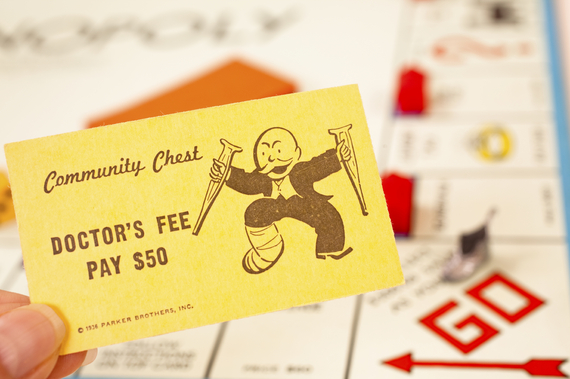 Credit agencies must now wait a half year before they can report past due medical debts.

Around 43 million Americans have past due medical debts on their credit reports, according to a December 2014 report by the Consumer Financial Protection Bureau (CFPB). A whopping 52 percent of all debt on credit reports is from medical expenses.

Not surprisingly, hefty medical debts are a major source of personal debt, and the process of filing medical insurance claims and waiting for reimbursement are often the cause of delayed payments. According to a Bloomberg report, "Collection agencies typically report medical debt to the credit-reporting firms after they receive unpaid bills from hospitals, doctors and other medical professionals. While unpaid bills result from consumers not paying, they can often result when insurance companies delay payments."

Paid debts will disappear from credit reports
Another major change with the way credit agencies will handle paid delinquent medical bills, versus other types of outstanding debts like home and auto loans, credit cards and collections, is that once past due medical debts are paid in full they will no longer show on a credit report. Traditionally, all paid delinquent debts including medical bills remained on credit reports for up to seven years -- longer in cases of more significant debts like liens, judgments, bankruptcies and foreclosures.

Credit errors are not uncommon
According to a 2013 Federal Trade Commission report, 1 out of 5 people has errors on a personal credit report. And, a 2012 CFPB report found that credit bureaus resolved an average of only 15 percent of consumer disputes internally. The remaining 85 percent were referred to the original lenders or creditors.

In 2013, the three firms began sending paperwork that consumers could mail in with their disputes to the lenders or other companies to address specific complaints. Of course, you still have the right to instigate the credit cleanup process directly with the credit agencies Experian, Equifax and TransUnion. Sample dispute template letters can be downloaded for free from their websites or on The Credit Cleanup Book's website at tccbonline.com. Credit agencies and creditors must inform you of a result of their findings within 30 days, otherwise the error in question should be removed.

Humans vs. computers
Another change announced with the new rules: credit disputes will increasingly be reviewed by humans, and not computers. Previously, the dispute process was mostly comprised of automated verifications. This system has been accused of being highly inaccurate, especially for consumers filing dispute requests online (not recommended), and since most credit disputes are unique and should be reviewed on a case-by-case basis. As credit agencies change their processes, more credit reporting error disputes will be reviewed by humans.

If you are preparing for, or are already in the process of applying for new credit, such as a home or auto loan, it's always a good idea to know where you stand. Lookout for my next article on credit titled, "When Free Scores are Good Enough."