We are currently in the middle of a massive technological shift - one that might be going unnoticed by most consumers. The debit and credit cards most individuals carry around in their wallets are being upgraded to a higher global standard known as EMV (Europay, Mastercard, Visa). Some of you may have already received a new card from your financial institution with this small, gray rectangle sitting in the upper left front facing side of your favorite little piece of plastic. Though highly unassuming, these smartchips are the next line of defense against an ever-increasing threat facing many Americans - credit card fraud.

According to a 2012 Nilson Report, over $11.3 billion was lost to payment-card fraud, in one year alone - close to half of this, $5.3 billion, originated in the United States. With major credit card breaches and counterfeiting occurring seemingly every few weeks, issuers took a critical look at ways of combatting this trend - their answer was EMV. The technology has been standard around the world for over a decade. Countries like the United Kingdom, France, Italy, and even North Korea, have been issuing smartchip-enabled credit cards for years. While the results and effectiveness of this technology have been put into question, there is no denying that the added security of EMV is a massive improvement over the current US standard. 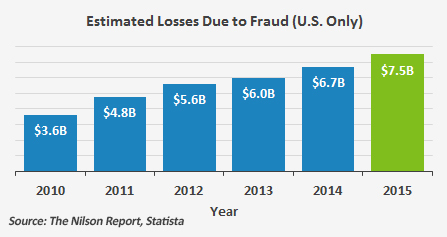 Estimates put the cost of implementing EMV in the United States at close to $9 billion - almost double the cost resulting from fraud in 2012. Still, this one time cost can be thought of as an investment. By putting negative pressure on the current growth of credit card fraud, both business-owners and banks stand to gain a lot. When it comes to merchants, due to the liability for fraud being shifted to them, upgrading for them is a must. Card fraud is a widespread disease within the payment industry. While the $9 billion medication may a hard to swallow for most, avoiding treatment would leave a far-worse taste in our mouths for years to come.