Paying off debt can feel impossible when you're already tens of thousands of dollars in the red. Here's the good news: It can be done. Take Kristen Seaton's inspiring success story on how to pay off debt. Seaton lives in Boston, MA, and managed to pay down a whopping $67,000 in debt in less than two years. Here, she shares how she made it happen -- and the tips that can help you succeed too. 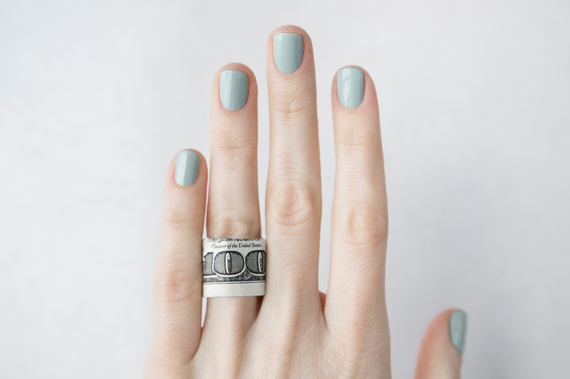 Start with a plan to pay off debt quickly

Seaton's debt came from a familiar place: student loans. Even if you don't have student loans to repay, you probably know someone who does. Getting rid of this particular financial burden is a challenge faced by more than 40 million Americans (and that number is from 2014!). Seaton graduated from college in May of 2009. Before leaving campus, she met with a loan adviser at her university who told her the monthly payments would be more than $600 per month for 15 years. "I remember walking out of the meeting and calling my dad in tears," Seaton says. "I was so overwhelmed that I had taken on so much debt at the age of 21."

She worried that her student loans would derail some of the postcollege dreams she had, like eventually starting a business and (someday) buying a house. Her dad encouraged her to focus on repaying the loans as quickly as possible. That was all the motivation she needed to get to work. And she had big plans for that work too. Seaton left school with a degree in criminal justice, but realized an entry-level job in her field of study wasn't going to help her pay off the student loans as quickly as she wanted. "I had been teaching swim lessons for six years at that point," she explains. "I decided that I was going to move to California and teach swimming full time."

The decision: Pay off debt or save?

Seaton made the move from Boston to California a few days after graduation. The first step in her debt-payoff plan: live cheaply and keep her financial situation top of mind. "I lived with a family friend [and] bought a $300 car that got me to and from work," she says.

The second step was to start working -- and not just a regular full-time schedule. "I started teaching swim lessons 40 hours a week and did an additional 12 hours of coaching a week," Seaton shares. She also picked up a morning shift for a manufacturing job and baby-sat every Thursday, Friday, and Saturday. "I lived off of my baby-sitting money. One hundred percent of my teaching, coaching, and manufacturing money went to paying off my loans," she says.

Working hard, keeping her expenses low so that a single source of income would cover costs, and saving everything else she earned allowed Seaton to make progress quickly. Eventually, she rewarded herself by bumping up her living expenses and moving into her own apartment.

The power of accountability and a support system

Seaton undoubtedly worked tremendously hard, but she had a great support system. She said her dad would hold her accountable and call her each week to ask if she'd made a payment on her student loans. "I remember calling my mom and getting so annoyed with [my dad] nagging me about it," she says. But after a few months of dedicated repayment, Seaton started to see the total amount due go down. And then she made the phone calls with her dad into a game: Rather than wait for him to call her, Seaton started calling to tell him how much her last payment was and how much she still owed.

"After doing this for a year, I got really excited and started to really see that there was an end in sight," Seaton remembers. "At that point, I made it my goal to pay off my loans [in] no more than two years." Sure enough, one year and eight months later, Seaton made her last payment to Sallie Mae.

And she didn't stop there. Seaton kept up her habits of hard, dedicated work for well over 40 hours per week at multiple jobs that generated several income streams. Six months after paying off her student loans, she had $20,000 in savings. She moved back to Boston, started her own business, Powers Aquatics, and bought her first home -- all before the age of 25.

Tips for paying off debt

"Debt does not need to be something you have to deal with your whole life," says Seaton. "There is an end in sight." If you're considering a plan for repaying your own student loans or other debts, you can learn from her frugal habits and dedication to hard work. Seaton says that she got "really into budgeting" while becoming debt-free, and made a habit of setting multiple goals. Because $67,000 was such a large number, she broke down her plan to include small weekly and monthly goals. She notes that it's important to give yourself small goals to accomplish, as it helps develop the habits you need to knock out bigger achievements.

She also lived by the rule that if she didn't have the cash for something she wanted, she couldn't afford it. "Cut up your credit cards," she advises others looking to pay off their own debts. She made a habit to use discretionary income for debt repayment -- not for entertainment or luxury buys. "At the end of every week, I would check my account," Seaton recalls, "and if there was anything left over, I would make a payment before I could even think about spending it on anything else."

That's not to say the temptation was never there. "My friends used to say to me, 'You are young and just out of college, you should be having fun and not working so much!'" Seaton says. "I used to think, 'Well, I'm going to work really hard now and then have fun later.'" Today, Seaton is 28 years old, debt-free, and has moved on to her second home, purchased with her husband after selling her first property.

Her final thoughts about her experience in crushing her debt? "Hard work pays off," she says, "and if you set a goal, you can obtain it."

Are you living debt-free? Do you know how to pay off debt quickly? Share your tips and experiences in the comments below!