Pleading guilty to criminal charges is proving so harsh and damaging to Credit Suisse that its stock price is only up 1 percent Tuesday morning. Must be nice to be too big to truly prosecute.

The Swiss bank pleaded guilty Monday evening to conspiring to help U.S. customers evade taxes, the first such guilty plea by a major financial institution in years. Not long ago, prosecutors, regulators, banks and shareholders all feared that having a major bank like Credit Suisse plead guilty could have catastrophic consequences for the bank and the global economy. Now they know better -- everything will be just fine.

"We continue to be hopeful and encouraged that there will be very little impact," Credit Suisse CEO Brady Dougan, who will keep his job as part of the bank's deal with prosecutors, said in a conference call Tuesday morning.

That should certainly make banks think twice before committing more crimes: It will make them think that doing crimes, and even copping to them, is not such a big deal. 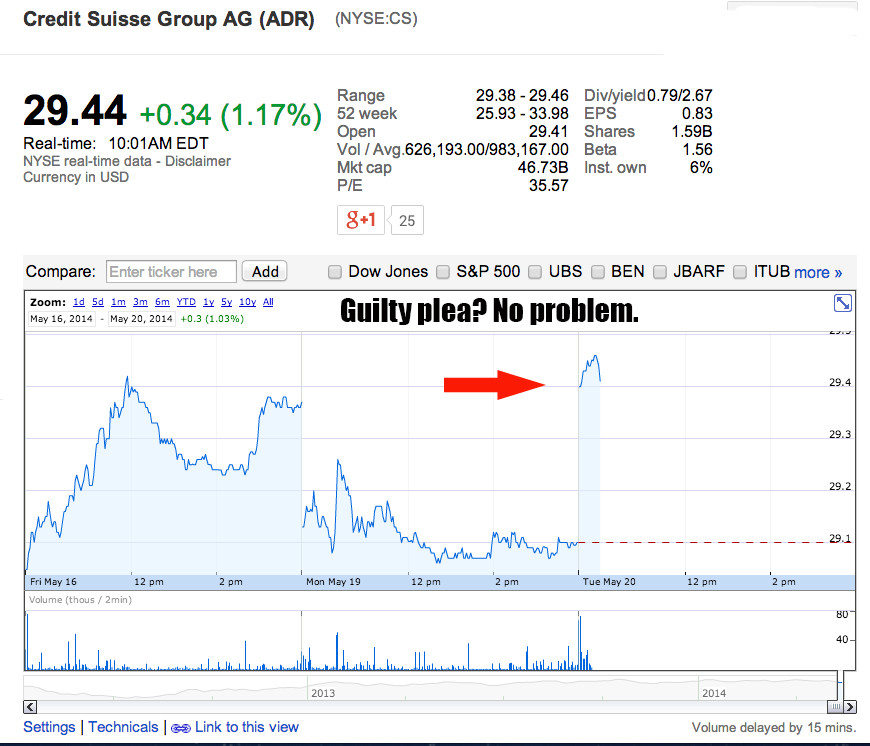 No wonder shareholders are cheering and Wall Street analysts are keeping their "buy" ratings on the stock: Top bank executives will get to keep their jobs, the bank can pin the whole thing on a handful of underlings, and it won't have to give up a list of client names to the government. Credit Suisse will have to let an independent monitor keep an eye on it, but that's a minor inconvenience at worst. The guilty plea could cost the bank some clients here and there, but investors and analysts are betting there won't be much impact. The most painful part of the deal, the $2.6 billion in fines, is manageable, less than one quarter's revenue.

Government sources boasted to The New York Times about how a Credit Suisse lawyer begged them for mercy "with a quiver in his voice" before they brought down the hammer of swift, merciless justice -- the "force of the law," as the NYT's headline puts it. In the end, this lawyer was basically Brer Rabbit begging not to be tossed into the briar patch -- the bank got exactly what it wanted.

At the same time, our brave prosecutors were doing some begging of their own, pleading with regulators not to use a Credit Suisse guilty plea as a reason to force the bank to stop doing business, which would have rattled the financial system.

We're probably going to hear a lot from the Justice Department about how this case proves prosecutors have finally solved the problem of "too big to jail." Not by a long shot.