It is the creepiest film in the Cannes Competition: Dutch director Alex Von Warmerdam's Borgman. The story of a charmingly peculiar tramp (Borgman) who enters a bourgeois home and progessively, with the help of a couple cohorts, kills a few in the entourage, the violence is not the disturbing aspect of this movie. What gives the story an edge is that we have no idea why all this is happening.

"Why do you do what you do?" I said, cornering the lead actor, the extremely talented Jan Bivoet who plays Borgman, on the beach after the screening. 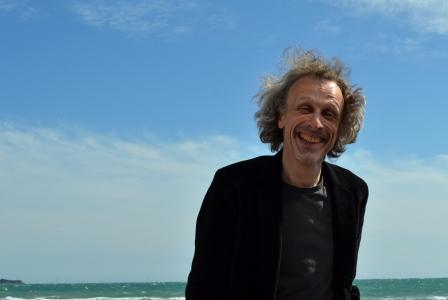 "For reasons under the surface!" he quipped with an impish gleam.

"What reasons under the surface?" I asked, remembering that we first meet "Borgman" underground, where he seems to live in hiding, before he runs off to insinuate himself in the bourgeois home.

"Love for the married woman?" I said, referring to "Marina", the wife who welcomes the tramp into her home, gives him a bath, and eventually begs him, to no avail, to make love to her. "Love? You don't love her!"

None of my fellow journalists, sitting behind us on the deck, seemed to remember that kiss. We all scratched our heads trying to remember. Like other details in the film, it just did not make complete logical sense.

But we all liked the film--to some extent. For this is the thing about Borgman: it is a pleasure to watch, no matter (or perhaps because) how senseless it is. Visually, the film is full of bizarre aesthetic touches. The house, where most of the crimes take place, has a creepy modern boxiness to it. The garden seems to be lifted from an old Agatha Christie flick. The bourgeois children, with their strange ethereal pale faces, seem like little elves.

We also enjoy the creative murder scenes, for the fanciful techniques (poisoning, strangling) as well as for the kitschy humorous dialogue. One appealing scene is the tramp sneaking into the children's room to read them an odd fairytale at night, one in which a dangerous beast lives hidden in a dark lake (incidentally, the cadavers end up in a lake as well).

There is also the prim blonde nanny who works in the house. Her thin stoic conservative flat-chested appearance is over-the-top irony.

The film is a visual treat.

"Visually, how did I work on this film?" said director Van Warmerdam, whom I cornered as well. "Let's just that when I write the script, and note 'he came into the door', the door is immediately there and the window is there, and I don't change that when I shoot. The house I designed myself. I wanted total control on the mise-en-scene. I also wanted the distances in the house: the distance Borgman has to traverse when he escapes from the bedroom to the front door." 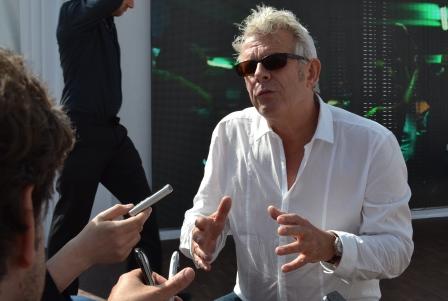 As to what all this evil means to the director, he grinned and turned the question back to me:

"So that's what the film's about. To me it's a game. My evil characters are friendly. They are normal. They don't scream. They do their work very precisely, in a very pleasant way. I did this to enjoy myself. You must admit it was very nice."