In what sounds like the opening scene of a horror movie, British cave enthusiasts have discovered hundreds of centuries-old protective marks and ritualistic drawings designed to capture, trap and repel evil forces.

“You can’t help but wonder: How scared were they of something?” asked Paul Baker, director of Creswell Crags, an ancient cave system about 150 miles north of London. “What were they concerned about that they would go to this level? There is no area that hasn’t got a mark on it somewhere.”

The drawings, which date to the medieval and early modern periods, had been spotted before but dismissed as graffiti from more recent eras.

However, cavers from the Subterranea Britannica organization noticed that the etchings were actually apotropaic marks ― essentially protective marks ― scrawled all over the wells, ceilings and around holes and crevices, the cave’s operator said in a news release.

The etchings include “diagonal lines, boxes and mazes” believed to be “devices for capturing or trapping ‘evil.’” There are also VV marks that are believed to represent Mary, “Virgin of Virgins,” as well as PM, for “Pace Maria.”

The nonprofit organization said it could be the largest collection of apotropaic marks in the United Kingdom.

But it’s not clear what, specifically, the “witches’ marks” were aimed at.

“It could be fairies, witches, whatever you were fearful of, it was going to be down there,” Alison Fearn, a University of Leicester expert on protective marks, told The Guardian.

The cave’s organization said the marks could have been made to ward off sickness, death and poor crop yields.

“Even two hundred years ago, the English countryside was a very different place,” Duncan Wilson, chief executive of Historic England, said in a news release, adding:

“Death and disease were everyday companions and evil forces could readily be imagined in the dark. We can only speculate on what it was the people of Creswell feared might emerge from the underworld into these caves”

The caves have a long history of being occupied by Neanderthals as far back as 50,000 years ago, followed by Homo sapiens. The site is known for the art on its walls dating to some 12,000 years ago, including images of “bison, reindeer and birds, as well as some abstract symbols.”

Now, however, the cave may also be home to another kind of art altogether.

“We’re all still coming to terms with the importance of the find,” Baker said. “It’s strange to imagine that 11,000 years after our Ice Age ancestors made their art on our walls, that fear of the unknown may have prompted superstitious locals to return to the rock and make their mark.”

What The Hell Is Down There? Centuries-Old 'Witch Marks' Found In Ancient Cave
27 Amazing Natural Caves 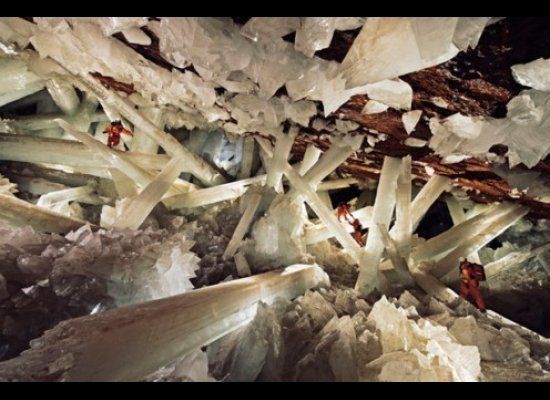