Who doesn't love a good history mystery? You don't have to be a Civil War buff to be fascinated with the attempt to identify the two skeletons found in the turret of the USS Monitor when it was raised from the ocean floor a decade ago. Launched in Brooklyn in January 1862 and lost in a storm off the coast of North Carolina on the last day of that same year, the famed ironclad's entire functioning existence played out exactly 150 years ago. It's this special anniversary that has focused attention on efforts to give a name to each of the two sailors whose remains were recovered, and with the approach of Memorial Day, now seems a fitting time to delve into this mystery.

Fortunately, recent developments in forensic technology and techniques make this objective far more viable today than in the past, and genetic genealogy, in particular, may well hold the key. All told, 16 crew members lost their lives when the Monitor foundered, so a logical approach to take with this investigation is the process of elimination. A number of factors can be considered, including the following:

As a forensic genealogist, I couldn't resist the urge to go into Temperance Brennan mode to draw my own conclusions leaning primarily on the first half dozen factors mentioned above. And as any viewer of Bones (or reader of the Kathy Reichs novels the show draws its inspiration from) knows, it's essential to start with empirical evidence.

What the Evidence Shows In terms of the two skeletons, what is known based on assessments made by forensic anthropologists and other experts is that one crew member was in his 30's while the other was roughly 17 to 24 years of age. The skulls and bones of both sailors indicate that they were Caucasian, and both also show evidence of stress such as repetitive heavy lifting for the older and a broken nose for the younger.

Height has proved somewhat more challenging to ascertain. Using skeletal remains, it's possible to estimate height, but necessary to allow for a bit of variability in such determinations. Calculations for one of the skeletons were further complicated by the fact that one leg was longer than the other. Therefore, figures presented in the charts that follow should be regarded as approximations, especially for the older of the two.

These details can be cross-referenced with the genealogical paper trail for the 16 crew members who died when the USS Monitor sank. In this chart, I've summarized details that I found in service, pension, census and other records for each of the 16. I then grouped them into clusters of candidates for each skeleton based on age. 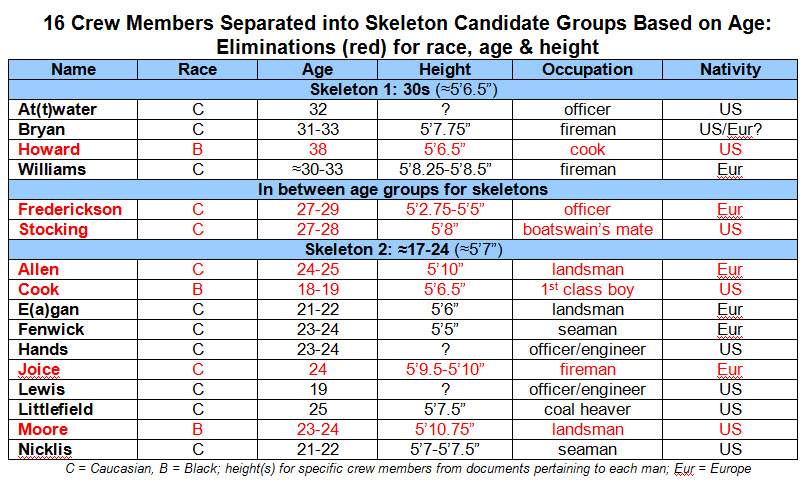 Process of Elimination Almost immediately, it's possible to eliminate seven of the candidates (those in red above) based on race, age and height. Three of those who perished, for instance, were African American, while two fell outside the age estimates. I allowed for more flexibility in considering height not only because of the forensic challenge mentioned previously, but also because of human nature. If you've ever rounded up half an inch when getting an ID, you know what I mean. Simply put, many of us claim different heights at different times, and these sailors were no exception. For example, Frederickson's stated height varied by 2.25 inches across assorted documents. Even taking all this into account, though, several of the candidates were either too short or too tall to be one of the skeletons.

This first round of eliminations takes the candidates down to nine. After some deliberation, I then removed those who were officers (those in red below). While some would take issue with this, I ultimately culled the group this way for several reasons, particularly the wear and tear on the older skeleton and the fact that almost all the artifacts found in the turret were items generally associated with enlisted men. Specific issues applying to the officers (e.g., according to eyewitness accounts, A(t)twater was seen to have slipped into the ocean at the time of rescue, so seems unlikely) were also contemplated.

This leaves six possibilities -- two for the older man and four for the younger. The next factor I mulled over was isotopic testing conducted mainly on the teeth. I don't pretend to have expertise in this field, but as it's been explained to me, teeth can point to where an individual spent his early years. Briefly, oxygen gets incorporated into drinking water, making it possible to map the distribution of isotopes around the world, and as a person's teeth complete their formation around the "tween" years, they essentially lock in the isotopic information for the location where he grew up. Scientists apparently derived Northern European values for both skeletons, suggesting that they were originally from Europe. With limited exposure to this type of analysis, I can't attest to its accuracy, so opted to incorporate nativity of the remaining candidates, while not eliminating them purely on this basis.

Skeleton 1 (Older) Turning first to the older skeleton, this isotopic analysis would seem to tip the scales in favor of Robert Williams, a Welsh immigrant, but there's a small problem. Though the other candidate, William Bryan, was initially thought to have born in New York, I've found reason to believe that he may have hailed from Scotland. Like Williams, he was a fireman, so both would have performed similar, repetitive labor, and even though it's important to leave some wiggle room in terms of height, Bryan is closer to the estimate than Williams.

The bottom line is that it's difficult to say which of the two men the older skeleton might have been, but the good news is that there's a tie-breaker available: DNA. Because there are so many men named Robert Williams of a likely age who came to America from Wales, it's not possible to pluck out his family to locate relatives to provide DNA reference samples, but it is possible for William Bryan. His family tree has been well explored, and at least one Bryan family member has supplied a Y-DNA sample (DNA that would have been passed paternally). Since mtDNA (passed from mothers to both their sons and daughters, but then passed on again only by the daughters) is most commonly used for degraded remains situations such as this, this would be another option. If the DNA results of Bryan family members do not match with those of the first skeleton, then this individual would presumably be Robert Williams.

Skeleton 2 (Younger) The second individual is harder to evaluate. Isotopic testing favors Irishman E(a)gan and Scotsman Fenwick, but as mentioned earlier, I'm not entirely willing to rule out the American-born. It's tempting to point to Fenwick who had the misfortune of arriving in the United States by virtue of a previous shipwreck, but his height makes him a borderline prospect and the mtDNA of a great-niece of his I tracked for a documentary several years ago matched (though not definitively so) the older skeleton, but not the younger.

So that leaves us with E(a)gan and two Americans, Littlefield and Nicklis. As with his Welsh counterpart for the older skeleton, there are several who share E(a)gan's name, age and origin, so it's not possible to confidently single out the correct one, but both Nicklis and Littlefield offer potential for securing DNA samples, either by testing living relatives or getting more creative and testing personal effects of deceased individuals or exhuming remains of selected relatives. The recent addition of Y-DNA testing to the forensic arsenal means that odds are better now than they were even a couple of years ago. Of the two Americans, Nicklis is the more intriguing because a spoon with the initials "J.N." inscribed on it was found in a location that corresponded roughly with the left front pocket of one of the skeletons.

The strongest candidates for the older skeleton, then, are Robert Williams and William Bryan, and DNA may well break that tie. William H. E(a)gan, Jacob Nicklis and George Littlefield appear to be the best bets for the second skeleton, with a slight edge to E(a)gan for his European origin. Again, DNA may be able to strengthen or weaken the argument for each of these individuals, and for greater confidence still, I'd want to add Hands, Lewis and Stocking (the alias used by a fellow named Wells Wentz whose family tree is known) to the genetic target list as a safety net in case age estimates or my notion about officers should be off-base. How fortunate we are that genetics offers a means - previously unimaginable -- to resolve the mystery of these two sailors. Like many, I would like to see the identification of and a memorial service for these long unknown heroes, and I can't think of a more appropriate date than Dec. 31, 2012 -- exactly 150 years after their sacrifice.

Related Articles: Men of the USS Monitor: County Galway, Ireland is Home to Another American Hero