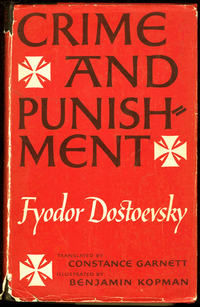 In his essay "The disease of theory: 'Crime and Punishment' at 150" (The New Criterion , May, 2016), Gary Saul Morson makes the following remark about Raskolnikov's murder of the old pawnbroker, the incident that propels Dostoevsky's narrative:

"The crime emerged not from a specific decision but from a state of mind...Every moment in which he fostered the theoretical state of mind, in which abstract considerations displaced common decency, made the crime more possible."

Morson's piece is a brilliant meditation on the kind of thought that creates its own vacuum. In place of air what is expunged by theorists of the extreme, who put ideas before people, is common humanity. It's a subject that Tom Stoppard also broached in The Coast of Utopia, where anarchists like Bakunin and Herzen are depicted gripping the imagination of the intelligentsia. Bazarov, the nihilistic character of Turgenev's Fathers and Sons is an idea come to life while Solyony, the Lermontov quoting alienated romantic in The Three Sisters is a proto-Raskolnikov who finds little value in human life and kills another character in a totally gratuitous showdown. Commenting about the sensibility of the era that Dostoevsky describes and it's effect on the shaping of Raskolnikov's character Morson remarks,

"It is almost as if people don't think ideas, but ideas use people to be thought."

Is this in effect the more profound issue that underlies Philippa Foot's famed problem in ethical philosophy. In order to spare five people a trolley has to be diverted so that it simply hits one. From a utilitarian point of view it makes sense to sacrifice 1 to save 5. But what about the sanctity of the life of that one individual? As Morson states,

"According to utilitarianism, the fundamental criterion of morality is the greatest happiness of the greatest number. What if that entails murder?"