To be honest, the idea of chile-infused beer really did not sound that crazy to us. We've prepared and consumed our fair share of micheladas, and tend to drink our beer alongside things that are heavily chile-spiked anyway. But then we read the labels on Stone Brewing Company's newest creations, Crime & Punishment: red and green jalapeños, black nagas, Caribbean red hots, Moruga scorpions and fatalis. Then we started to get a little nervous.

Stone has long been known to push the limits of how much flavor you can pack into a single beer, but with these two newest brews, they've really outdone themselves. 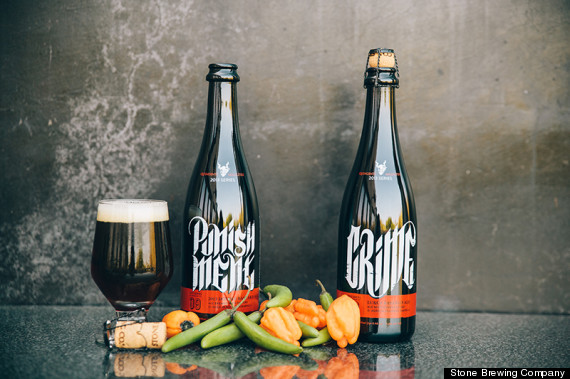 Crime is built on their Lukcy Basartd Ale (not a typo, they are drunks and that is how they spell it), a blend of their proprietary brews, while Punishment is built on their 2013 Double Bastard Ale -- once brewed and infused, they are both aged in bourbon barrels. After reading some of the praise and lamentation of other reviewers, we have to admit that we were expecting an almost unpalatable level of heat. Luckily, that's not what we found.

Make no mistake, these beers are spicy. Spicier than you would ever make your own michelada on purpose. But that makes them a lot of fun to try, and to make other people try. No one's eyes watered, no one cried, but one or two of us did choke a little on the heat of the Punishment, which seems to be a little more chile-forward in addition to having a stronger beer flavor and higher alcohol content. Our favorite part was probably the aroma -- Stone's familiar hop and caramel notes blended with the intense smell of a whole ristra of dried chiles.

If you and your friends are heat seekers, you cannot afford to skip trying this beer. While it won't bring you to tears, or to your knees, it does taste really good and is probably the spiciest beer we've ever met. We hope the friendly people at Stone won't be mad at us for saying that it would probably make one of the best micheladas on earth.

Update: Stone reached out to insist that they are not just drunk all the time, and that the name of Lukcy Basartd Ale actually has a backstory. Here's what they said, "It was actually because the beer is a blend of three different brews -- Arrogant Bastard Ale, OAKED Arrogant Bastard Ale and Double Bastard Ale -- so we treated the words as if they were tossed into a blender and allowed them to reform as Lukcy Basartd Ale. We drink, but like any responsible company, try to convey responsible indulgence." We like our explanation better, but we're willing to take their word for it.