A government contractor that police departments across the country pay to track crime reports and issue maps of crime data includes in some definitions of homicide "murder by abortion."

The term appears in all homicide listings in the city of Los Angeles shown on the CrimeMapping.com service, provided by the San Diego-based vendor The Omega Group under an agreement with the L.A. Police Department. Reports for L.A. on CrimeMapping.com continue to show the term despite objections from some residents that the language is false and provocative. 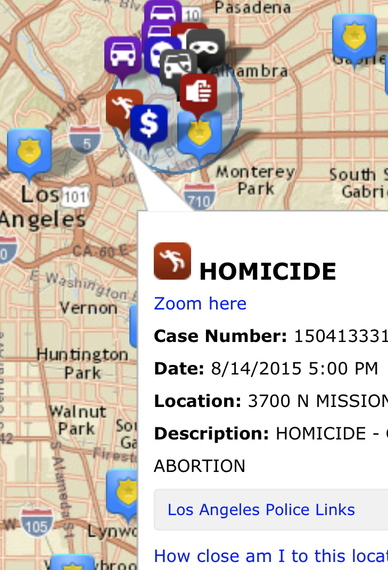 "Using inflammatory rhetoric, 'murder by abortion,' and putting abortion in the same category with homicide suggests a woman's legal right to choose abortion is not her choice at all," says Diane Edwardson, a community activist for more than two decades in the city's Silver Lake neighborhood. Edwardson has objected to the designation in past complaints to the police department and city officials.

The term is deceptive in that it conflicts with prevailing federal law. It also distorts the homicide label by putting the apparent stamp of legal authority on an incendiary accusation. Bulletins containing the term reach hundreds of law enforcement personnel in L.A. and thousands of residents who view CrimeMapping information directly through the company's Web site or in updates periodically distributed by police.

"Rhetoric has an effect over time ... If you see it often enough, it can make the audience think abortion is murder," Edwardson adds. "Crimemapping is an otherwise useful tool for neighborhood watches. Why are taxpayer dollars paying to divert attention from real violent crime?"

L.A. Police Department had no immediate information about the origin of the label or why it appears in crime data for the city. "I'm unaware of the term being used," says Officer Drake Madison, an LAPD media relations staff member.

The Omega Group did not return calls for comment on the matter. The company's Web site includes a disclaimer that states, "CrimeMapping.com is the host of crime data received from law enforcement agencies and is not responsible for the content in this site."

Crime-tracking Web sites operated by private vendors but drawing on local police reports can make the lines of accountability between government and private companies very fuzzy over the accuracy of information presented there.

A 2013 report by the Poynter Institute, which reports on trends in journalism in the interest of public integrity, found that some police departments that contract with The Omega Group have used their vendor agreements with the company to deflect questions about or deny access to the information. At least two police departments, in Omaha and Las Vegas, referred to their relationship with The Omega Group in trying to reject requests for the crime report data under state open-records laws.

Women's right to abortion in the U.S. has been protected for more than 42 years under the Supreme Court's 1973 Roe v. Wade ruling. Though modified by subsequent case law, including a 1992 ruling, the basis for women's constitutional right has survived despite concerted legal and legislative efforts to undermine or undo it.

Violence and attacks on property have accompanied the political onslaught. Between 1977 and 2010, according to the National Abortion Federation, which tracks violence against abortion providers, 8 murders of doctors or clinic workers occurred at the hands of abortion opponents. And since 2010, the number of state policies aimed at restricting, outlawing, or denying access to abortion in some or all circumstances has dramatically increased.

Longtime advocates for privacy and access to reproductive healthcare found use of the phrase "murder by abortion" in local data appearing on CrimeMapping.com to be disturbing. The label seems to invoke "shame to get in the way of woman's God-given right to make the sacred decisions about when, how, and under what circumstances to become a parent," says Rev. Harry Knox, president and CEO of the Religious Coalition for Reproductive Choice.

"Women need compassion when facing these important and sacred decisions, not shame," Knox adds. "This language is immoral, and progressive people of faith need to stand up and stop the shame."