In this excerpt from Honduras: Journalism in the Shadow of Impunity, released byPEN International andPEN Canada on January 23, human rights defender and co-founder of the Committee of Relatives of the Disappeared and Detained in Honduras Bertha Oliva speaks of her experience protecting Honduran citizens and journalists ignored or targeted by the state. 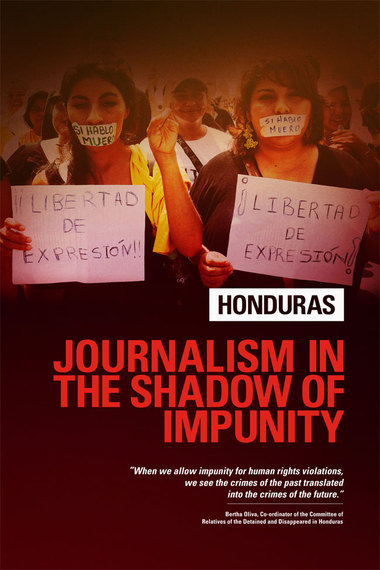 Bertha Oliva arrives late for our meeting. She is distracted. She tells us of a family that is being held hostage in their home. One family member has precautionary measures issued by the Inter-American Commission on Human Rights (IACHR) and the police are supposed to protect her -- but they won't. Oliva has been called in to help. This is what she and her organization do -- they step in when the state lacks the capacity, or the will, to protect its citizens from violence.

Oliva is the General Co-ordinator of COFADEH, the Committee of Relatives of the Detained and Disappeared in Honduras (Comité de Familiares de Detenidos Desaparecidos en Honduras), an organization she founded in 1982 with other women whose husbands, fathers and sons had "disappeared" in death squads. COFADEH's original mission was to find out what had happened to the disappeared and to secure their safe return. In the years since its founding, however, the organization has become a frontline defender of human rights in Honduras, working towards accountability for a wide range of abuses.

In Oliva's view, accountability is in short supply. "The dead are dead," she tells us. "We can do nothing for them." The murders of journalists and human rights defenders remain unsolved. The disappeared remain lost to their families. "When we allow impunity for human rights violations," she says, "we see the crimes of the past translated into the crimes of the future." What is happening in Honduras today reminds her too much of the 1980s: "We are living the experience all over again."

The 1980s were a harrowing time for many Hondurans. Under the military dictatorship, enforced disappearances could happen at any time. In 1981, Oliva's husband, Tomás Nativí, was dragged out of their home as a pregnant Oliva watched in despair. She never saw him again.

A painting of Nativí is on the door to Oliva's office, one of several memorials on the premises to the disappeared and the dead. She tells us that COFADEH documents human rights abuses because the Honduran authorities will not. "We exist to conserve memories of the past," she says.

Like many other human rights defenders, Oliva has been the target of threats and attacks. The IACHR has issued precautionary measures on her behalf. In fact, everyone at COFADEH is covered by a similar measure. She admits that the attacks frighten her: "I love life. That is why I defend human rights -- the lives of others." Despite this, she has declined police protection, saying that she would prefer them to devote resources to a meaningful investigation of crimes rather than stand guard at her home. Besides, she says, "Telling the truth is the best precaution one can take."

Read the full report at http://www.pen.org/hoduras