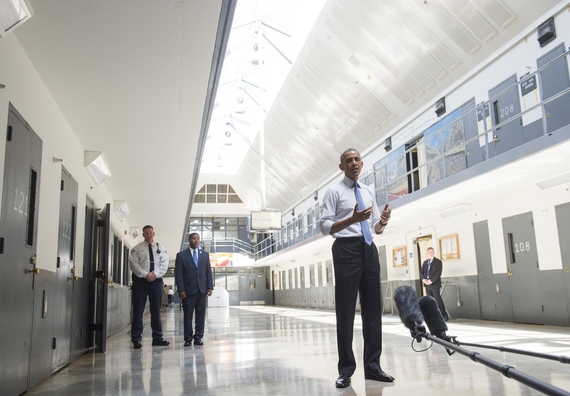 This week, President Obama has put a much-needed spotlight on the vicious cycle of mass incarceration. In the past three decades, the prison population in the U.S. has ballooned due to a number of factors that have created a system rife with discrimination and other abuses. And the burden falls disproportionately on low-income people and people of color.

The President made a historic visit on July 16 to a federal prison -- the first sitting president to do so. His visit spotlighted the massive overcrowding problem -- he was shown one 9-by-10-foot cell that sometimes holds three prisoners -- that is the result of a broken criminal justice system.

The visit came days after a galvanizing speech at the NAACP highlighting racial disparity in U.S. prisons, and other issues such as the overuse of solitary confinement.

It is significant that the President is drawing attention to these issues. But these words must be quickly backed up by actions.

The U.S. mass incarceration crisis has been a long time in the making. Lawmakers in the 80s and 90s competed to see who could get more "tough on crime." Typically that meant passing harsh sentencing laws with mandatory minimums and longer prison terms. Lawmakers also passed laws treating youth under the age of 18 as adults and boosting detentions of immigrants subject to deportation. These policies collectively contributed to a vast expansion of the prison population and have disproportionately affected minority communities.

In fact, racial discrimination runs through the core of the mass incarceration epidemic.

The UN Human Rights Committee, which monitors states' compliance with their obligations under the International Covenant on Civil and Political Rights, has expressed ongoing concern about sentencing disparities and the overrepresentation of individuals belonging to racial and ethnic minorities in U.S. prisons and jails, calling on the U.S. to reform mandatory minimum statutes, among other recommendations.

President Obama and the Justice Department are to be commended for putting a spotlight on the issue of mass incarceration and beginning to chip away at the problem. But we are in a crisis, and concerted action by the President and Congress is needed to address it.

Human rights principles should guide the way forward on badly needed criminal justice reforms. That means punishments must be proportionate, free of bias and serve a legitimate purpose. And we must stop treating youth like adults and revamp immigration enforcement and detention policies.

The President and Congress must convene and fund a national commission to create a strategy and timeline for addressing the root causes of mass incarceration, including disproportionate sentencing for nonviolent offenses, mandatory minimums, discrimination, youth incarceration and immigration detention. Congress must pass legislation to end racial profiling and reform mandatory minimum sentencing policies.

These steps alone won't solve the United States' many criminal justice challenges. But they can help bring the criminal justice system better into line with human rights standards and break the cycle of mass incarceration.