WASHINGTON -- In suburban neighborhoods around the country, teenagers sass their parents and yell at their peers. Usually, they grow out of it. In Detroit, a 17-year-old girl who misbehaved was sentenced to up to five years in the adult prison system. Afterwards, she tried to kill herself multiple times and was subjected to a cell extraction by prison guards that a use-of-force expert called "wrong and clearly dangerous.”

Jamie, as we’ll call her, was initially sentenced to two concurrent six-month sentences for a fight with a family friend. She was given a special youthful status that allowed her record to be scrubbed clean, as long as she met certain good behavior standards. But she was sent to an adult prison to serve her time, and while there, she lost that status and was given a longer sentence for the same crime. Jamie’s saga was part of a recent HuffPost Highline investigation into the treatment of children in adult prisons.

Prison officials, for the purposes of that story, told The Huffington Post that Jamie had been resentenced as a result of misconduct during her confinement. Chris Gautz, a spokesman for the Michigan Department of Corrections, said that she "failed in every instance" to live up to the conditions the judge laid out.

But new documents obtained through an open records request, which arrived after the initial story was published, reveal that her disciplinary record appears fairly mundane. The only misconduct tickets she received prior to the new sentence were for defying an order and giving a guard an "intimidating look," and yelling at an inmate who allegedly had slapped her on the back of the head.

The prison presented these two tickets to a judge, who revoked Jamie's special youthful status and changed her sentence from six months in prison to between almost 11 months and five years, with some credit for time served. The prison also told the judge that she had "no motivation to be involved" in peer groups and missed school, which she was required to attend, according to Gautz.

But Gautz told HuffPost that Jamie was not permitted to attend school because she was in segregation, or isolation. He said she was not in isolation for disciplinary reasons. (A logbook obtained by the Huffington Post shows that Jamie has a history of being on suicide watch.)

Jamie is one of the plaintiffs suing Michigan for mistreating youth held in the adult prison system, allegations the state denies. Jamie was originally sentenced in January 2012 for throwing a brick at a family friend and breaking her glass mail chute. (Jamie denied the assault and the police report notes that the brick may not have, in fact, hit the friend.)

In a wealthier county in Michigan that includes Ann Arbor, kids with this status generally do community service, like helping out at the local science museum. Jamie was sent to serve her time at the Women’s Huron Valley Correctional Facility, a prison that holds inmates convicted of crimes like first-degree homicide.

James Chylinski, the judge who sentenced her, said that for kids who come from unstable environments, the youth program, where some kids serve their time in adult prison, is an opportunity, "like sending them away to college." He added, "It's actually an effort to try to help them to lock them up, it's less punishment and more trying to rehabilitate them, making them go to school."

Jamie had at least three adult cellmates before her 18th birthday, including one in her 50s with a history of cocaine possession. In March 2012, she was issued a misconduct ticket for yelling, "I'm gonna whoop that bitch's ass" about another inmate. Jamie claimed she made the statement because the inmate slapped her on the back of the head and when she reported it to correctional officers, they didn't do anything. She claimed the inmate then threatened her again in the yard.

The next month, she refused to take down a cover from her door window and give her ID to a guard. (She told us she was changing her clothes and wanted privacy.) When the guard reprimanded her, she asked whether she was getting a ticket and refused to leave the guard's desk area. The officer wrote, "Prisoner stared at this writer the whole time with an intimidating look on her face." Jamie received a ticket for threatening behavior and disobeying an order.

"It’s hard to be here when you’re young, not having everything explained to you," Jamie told HuffPost in an interview. 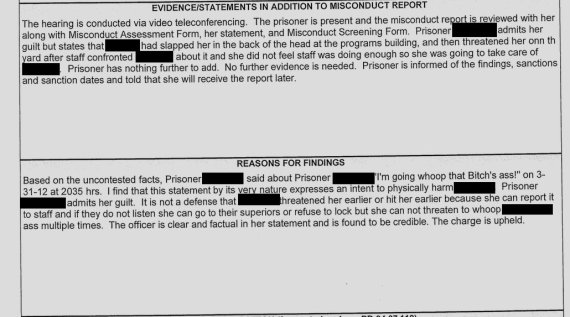 Gautz said there were "about a half dozen" reasons the judge could have revoked her youthful status.

“We rely on the staff at the [Department of Corrections] because they deal with this all the time," Chylinski said. It's very rare for him to have to revoke an inmate's youthful status and there are a number of factors that go into his decisions, he said. "Every case is individual, but a lot of it has to do with attitude," he said, relaying a hypothetical situation to make his point.

“Two guys come in front of you for stealing your car, and one of them came in with a suit and tie on and had both parents there, and you're in school and everything else,” he said, “and the other one comes in with an old raggedy T-shirt with an attitude like, ‘Screw you, judge’ -- they have sentencing guidelines, the guidelines for each of those people because of their prior record, or lack of it, would be the same -- but as a judge would you treat them the same?”

Advocates contend that this case only shows that teenagers are not adults -- and adult prisons are not equipped to deal with them. "At 17, you are literally still going through puberty and hormones are changing," said Kristen Staley, associate director of youth justice policy at the Michigan Council on Crime and Delinquency. "Moreover, factors such as early trauma or mental illness can stunt this growth ... MDOC staff is not thoroughly trained to handle teenagers and this [incident] is a clear indication of that."

Amy Fettig, senior counsel for the American Civil Liberties Union’s National Prison Project, said that "it seems to me Michigan is giving up on some of its kids for no good reason." She added, "That's a weekend of a teenager who is maybe having a bad day, it's certainly not somebody who is a threat to the community."