When I got this letter enclosing 20 some business cards from a St. Paul bail bond company about three weeks before the Republican National Convention, to give to members of my peace group, I couldn't believe it.

As a retired FBI agent and former FBI legal counsel who also knew the non-violent composition of the protest and peace groups that were organizing the various marches, rallies, concerts, picnics and "unconventional" artistic events during the RNC, I wasn't very worried about police brutality or jail. I was more worried about the increasing intimidation that was deterring more and more people from participating. So we held an impromptu press conference that last week to try and alleviate the fears and get more people to participate. I also wrote a letter spotlighted in the St. Paul newspaper entitled "Patriots can't stay home".

Unfortunately it turned out the bail bond company had the correct scoop. Although my husband and I luckily managed to escape, hundreds of others would find themselves arrested for things like "unlawful assembly" over the course of the RNC week in St. Paul and hundreds more would be subjected to chemical sprays and police brutality.

No patriot should have to face what we did merely to exercise his or her first amendment rights. St. Paul authorities were apparently duped into letting their city be used and abused, probably because of the lure of the (Republican) money. But even the promise of making money did not turn out to be true for most St. Paul businesses. There's little appetite now, with the elections over, to dredge up and rehash the nightmare, but without better exposure and more critical examination of what happened, the kind of "war on dissent" that occurred the first week of September in St. Paul risks repeating itself at all future "national security events". 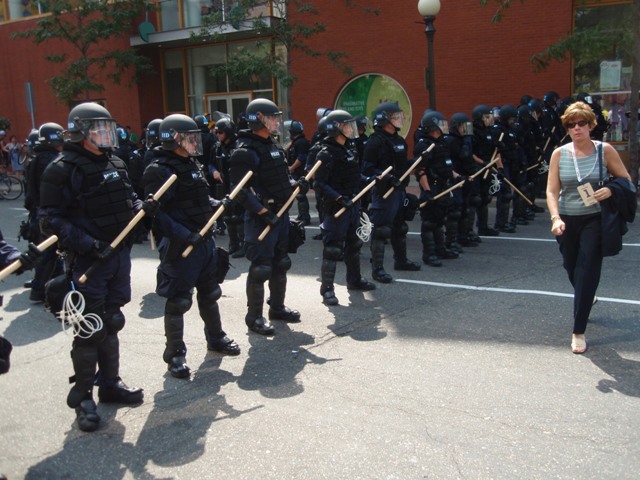 If you haven't seen the just released film "Terrorizing Dissent", please take two minutes to at least watch the trailer. The juxtaposition of McCain's phoney speech-making inside the Republican National Convention with the violent reality that was unfolding outside is quite eye-opening, isn't it? (The fact that TV and other main stream media only carried what went on inside the RNC and not outside contributed to creating the public approval "bump" for the Republican ticket -- certainly not unexpected following such televised extravagant displays but which was critical in 2008 for McCain-Palin to have any chance after Bush's eight disastrous years.)

Certainly, many folks who did not participate in the various activities held at the time of the 2008 Republican National Convention (Aug 31- Sept 4) and who did not witness it first hand, will have a hard time believing what an awful combat zone St. Paul was turned into much of the time that week; how pre-emptive raids effectively criminalized dissent; how community police were turned into militarized, dehumanized (and non-identifiable) robo-cops, equipped with tasers, pepper spray and tear gas; and then (unsurprisingly) pushed to over-react and use their chemical weapons and arrest over 800 non-violent citizens, including 40 some journalists. (In addition to the Glass Bead Collective and Twin Cities IndyMedia's raw footage film, there's a great insider viewpoint by William Cox: RoboCops: Professional Policing of Political Protest - An Insider's Viewpoint; the Sept. 1st Democracy Now interview of National Lawyers Guild Attorney Bruce Nestor and myself; and "Storm Troopers at the RNC" by Ray McGovern.)

All kinds of irregularities and bad departures from St. Paul's community policing model occurred. And the more we learn about the heavy-handed involvement of the Twin Cities' two (Republican) Sheriffs: Ramsey County Sheriff Bob Fletcher (whose deputies were convicted of corruption the week right before the RNC as a result of an FBI sting investigation) and Hennepin County Sheriff Richard Stanek (a McCain Campaign Co-Chairman), as well as diffusion of responsibility amongst a number of federal agencies, the more likely it appears these repressive police actions could have been politically motivated -- deliberately intended to intimidate citizens from exercising their first amendment rights in order to convey a false impression to the larger American public of little widespread opposition to the disastrous policies of the last seven years and those that Republican politicians continued to promote.

Unfortunately the intimidation did work, scaring thousands away from protesting and other activities in St. Paul that week. Watching the surreal scenes that unfolded outside the RNC, it's amazing any of us citizens had the courage to try, isn't it? In fact our little Peace Island Picnic group was only a block away from Mickey's Diner on Tuesday night, Sept 2nd (having just left the St. Paul "Free Speech Stage" outside the RNC) when police over reacted and shot their chemical weapons into the people on the street.

Help Defend the RNC 8! Sign the Petition to Dismiss Charges

If you're like me, you've probably signed hundreds of petitions in the last few years but I believe this one can really impact the situation because it's focused on one individual (Ramsey County Attorney Susan Gaertner) who possesses the legal wisdom to recognize the wrongfulness in proceeding with a criminal prosecution of this sort that would set dangerous precedent -- dangerous to constitutional rights because it would broaden terrorism to include mere property damage instead of acts dangerous to human life. Interestingly enough, this new crime was created in the wake of 9-11 by passage of the Minnesota Anti-Terrorism Act -HF 2622, commonly referred to as Minnesota's Patriot Act. The expansive definition of terrorism was written and pushed into law in 2002 by the very same Richard Stanek when he was the Republican leader of the Minnesota Senate (before he became Hennepin County Sheriff and McCain Campaign Co-Chair). This provision of the Minnesota Patriot Act has never been charged before and the argument is that it blurs real terrorism with what was, at most, acts of intended civil disobedience.

Most noteworthy is the fact that, once the plan of blurring these lines and smearing protesters as terrorists succeeded at the RNC, Republicans carried their McCarthy like tactics a step further, and tried to do the same with Obama himself, alleging that he had "palled with terrorists." That's when their bluff was called. But it was too late for the eight young people (the "RNC 8") who were already charged with felony "conspiracy to riot in furtherance of terrorism", charges that carry a maximum penalty of five years imprisonment and a $10,000 fine.

As an aside, I did not know any of the RNC 8 personally before this unprecedented attempt to use the expansive Minnesota Patriot Act to essentially "terrorize dissent" but you can hear them tell their own stories of what happened on this video along with comments of Naomi Wolf. If you're like me, you can sign their petition on the basis of principle alone: upholding the First Amendment and need for authorities to not blur what was, at most, planned acts of "civil disobedience" as opposed to acts of real terrorism.

What would Thomas Jefferson do?

He wouldn't hesitate to sign this petition. The turning of the "War on Terror" into a "War on Dissent" on our own citizens and the subsequent damage to First Amendment principles that we witnessed in St. Paul is reason enough to support this cause. Planning is NOT conspiracy. Protesting is NOT rioting. Dissent is NOT terrorism. 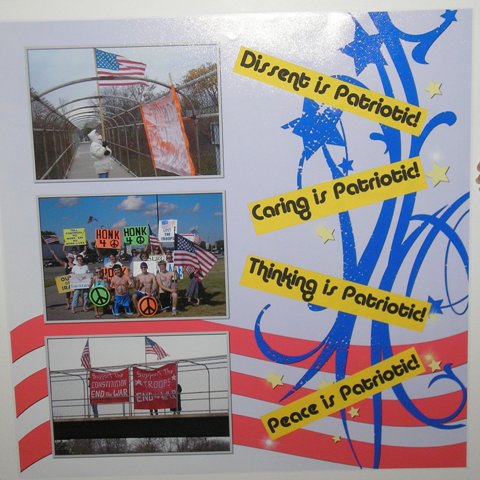 "The spirit of resistance to government is so valuable on certain occasions, that I wish it to be always kept alive. It will often be exercised when wrong, but better so than not to be exercised at all. I like a little rebellion now and then. It is like a storm in the atmosphere." --Thomas Jefferson to Abigail Adams, 1787.

(Earlier versions posted at The Vigil and DownWithTyranny)