Some people may accuse magician Criss Angel of playing God or, at the very least, imitating Frankenstein, as he attempts to raise the dead tonight -- using a real human corpse -- on his Spike TV series, "BeLIEve."

In the short, exclusive peek video above, Angel is in the middle of trying to bring a recently deceased man back to life.

Angel is well-known for his often death-defying feats of legerdemain, but has he gone too far this time, acquiring a real corpse for his televised experiment?

"People have died many times and they're clinically dead, then somehow they're revived back and it's inexplicable," Angel told The Huffington Post. "It's an interesting phenomenon, so I wanted to explore it."

To begin the process of trying to revive someone who's already dead, Angel had to overcome some obstacles.

"There were two things that were hard: First, to get a body -- a cadaver -- was the most difficult thing and we needed to find somebody who wasn't dead for a long period of time. The other thing was to find a facility that would allow us to do it because no facility wants to get involved because they feel that it can come off as disrespectful.

"We got a facility that said we could use them, but we had to sign an agreement that we weren't allowed to name the place, location or the owner. As a matter of fact, everybody had to be blindfolded to go there."

Angel said there were more than 80 bodies in freezers at the unnamed location.

"It was a very eerie and uneasy kind of environment, but we came away with a greater appreciation of how fortunate we are to have life and how we can't take it for granted."

For those who assume that Angel, as a magician, will probably just be working with some sort of Hollywood-type of body created for this "trick," he says, "No way!" (He's shown with the real body in the image below). 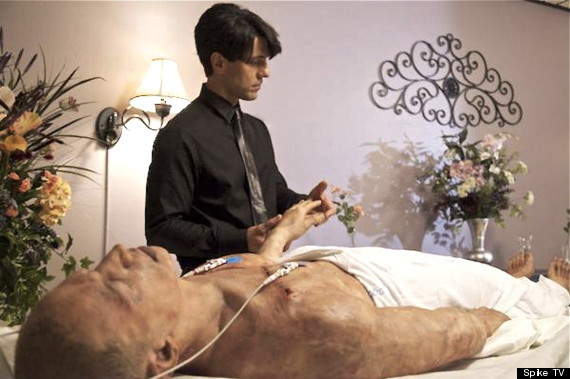 "I was given the death certificate and his name and we acquired previous home footage of this man, which we will broadcast on the show. It's going to make people's hair raise, and is something that I hope people will tune in to watch this very provocative demonstration."

Historically, there are many examples of religious accounts and beliefs in the resurrection of the human body. And the wildly popular current cultural obsession with all things related to zombies points to the public lure of things once alive, then dead, then somehow reactivated to life.

Why is Angel tackling something that he knows must have controversial overtones the likes of which other magicians might prefer to avoid?

"People are fascinated with death," he said. "That's why they stop and stare at a car accident, because their curiosity is provoked. I put my religious faith aside to explore the possibility to look at this phenomenon of people that are dead and are able to be revived.

"I ask people who deal with this subject matter all the time who perform thousands of surgeries, to see if they experience anything like that or can give us insight to it. We explore [the idea of] me being a conduit between life and death -- if we can bring somebody back for just another breath. Some people may think this is just morbid, but to me, it really shows when you stare death in the face -- inevitable for all of us -- it gives you a much greater appreciation and value for life, how fragile and important it is, and how you can't take any breath for granted."

Angel will certainly need a vacation after finishing up production of the television show. And he'll get plenty of rest, as he's about to go under the surgeon's knife -- no trick here -- to repair three shoulder muscle tears that cause him constant pain. This will require him to take a three-month absence from his "BeLIEve" stage show that he performs at the Luxor Hotel in Las Vegas.

The outcome of Angel’s attempt to raise the dead can be viewed on tonight’s episode of Spike TV’s “Criss Angel BeLIEve,” which airs at 10 PM ET/PT.