The idea for Cristi Puiu's new film Sieranevada came to him at his father's funeral. "During the memorial dinner, I argued with a Communist friend of mine." His eyes twinkled with irony. "A woman in her eighties full of political ideals."

"Just like the argument in the kitchen in your film?" I asked. 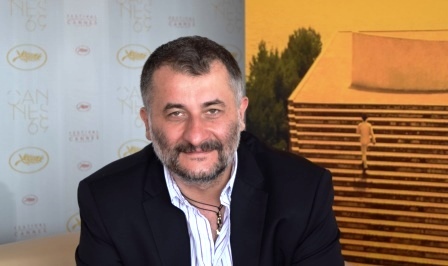 The film that resulted is three hours of a fraught family memorial service, revealing fissures between husbands and wives, grandparents and grandchildren, aunts and nieces. Most of the movie takes place in the huis clos of an apartment, with characters walking non-stop in and out of rooms. The sound of closing and opening doors is constant, as is the reconfiguration of characters. It is a brilliantly choreographed rhythmic dance that gives the impression of a family that is inherently fragmented, with no unity ever to occur.

The suspense: will the family ever sit down together and eat dinner?

I have never seen a film like it: where the intrigue is created by the camera's shuffling through hallways, and wondering which door will open next. We also have micro-beats of suspense: will the priest show up, will the funeral suit fit, and will the stranger Croat girl who shows up drug-sick ever stop puking?

Throughout, the characters are engaged in charged, tear-prone conversations, ranging in subject from conspiracy theories of September llth to the corruption of Romanian politicians to denunciations of infidelity. An elder aunt accuses her philanderer husband of having ridiculed her during their entire marriage for her lack of finesse in giving blow-jobs. Lary, the somber solemn lead character in the story, accuses his dead father, the subject of the memorial service, of having betrayed his mother with a family friend. Later his wife bursts into tears when hearing Lary's own revelation.

A common theme in all the conversations: the sense of being subjugated to someone else's power, and dominated beyond control.

Could the director be making a link between patriarchal power (the cheating abusive husbands) and political oppression (the manipulative politicians)?

"Yes of course," the director, in a deft verbal way, responded at once.

"We tend to look to find out what is behind the actions of politicians: instead we should look inside the family. Because it is the same model that is work. The father takes the decisions. The children and wife are not asked. They don't really know what is behind the decisions. The same is true in politics. Politicians will propose a law that is above the knowledge of the masses [and the masses will go along with it]."

The film, I noted, shows the patriarchal structure to be particularly strong in the director's native Romania.

"Patriarchy is the structure all over the world," the director rebutted. "Even in America, up until maybe 20 years ago. Then again, we must remember the Romanian saying: 'The man is the head, and the woman is the neck which moves it."

Once a film teacher in Romania, for nine years, director Cristi Puiu added that he was opposed to all forms of hierarchy: including that of teacher-student, a hierarchy that is rigidly imposed in the Romanian education system. "That's why I left the circle of teachers. The problem is that dialogue cannot be accepted."

As we sat on the terrace of the Palais, with the open sea in the distance, the director denounced other forms of oppression as well.

"We are constrained by our own self-censorship. We are all wearing masks. We lie. Even here at Cannes, we are putting on a 'suit', putting on a mask. Why?"

He opened his hands. "Because we want to be loved."

He continued: "And yet we never know how others are perceiving us. It's pretty sad. The void. The loneliness. It's just you and nobody else."

This sense of frustration is omnipresent in Sieranevada. The opening shot is a bleak sidewalk in the middle of Bucharest, with honking cars and noisy trams going by, as a woman struggles with a suitcase. It is this image of discord that sets the tone of the film.

"Babylon is not a metaphor," Puiu stated. "It is a real place. It is today's cities. Paris, Bucharest, New York. In the film you have all these disputes, in the apartment, in parking lots, in the street. So many territories. Everyone is defending their territory. We are in a battle. We are fighting against each other.

It is not an inspiring vision. While excitingly executed--with its memorable rhythmic beat-- the film leaves a sad bitter feeling.

There seems to be no hope. 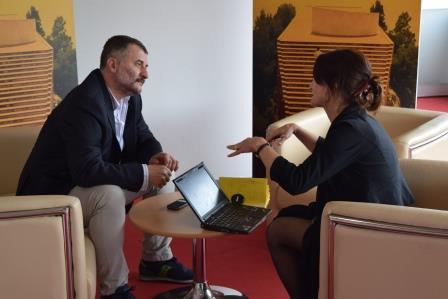 "There is light in my film. Three moments of light in fact. They all happen through music. In the middle of the film, there is the ritual of the boys singing. In our rehearsal, when the boys sang, tears came to our eyes," the director spoke with rapture. "I think music is the highest art. It gives a sense of harmony. How I wish I had learned an instrument! Instead, it was my brother who learned to play. As a child, I wanted to be a painter."

"Still your film suggests no transformation is possible. It all just leads to resigned laughter!"

"But when my film came out in the Balkans, the audience took the ending as very optimistic! It resonated with them. It helped them, they told me. The laugh in the end is telling the audience they are not wrong. It is like this. It is really hard. It is very difficult to cope with others, to build a family. You have to escape all kinds of traps. Betrayal is very present in our era. We are wearing masks. There is no other solution than being aware of it."

"So no transcendence is possible?"

The director's answer was surprisingly one of faith. 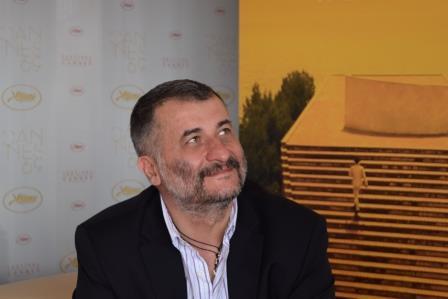 "I have a problem with atheists. No one I have ever met has followed the Ten Commandments. No one can. Not to believe in God is putting yourself first. Atheists discount God without even trying to find Him. Look, scientists spend a lot of money in building particle accelerators to understand how particles behave. You obviously need special conditions to understand particles and quantum physics. You also need special conditions to find God. Which is why monks have gone to the desert."

"You can't expect to meet God at breakfast!"