GUATEMALA CITY - Between the black smoke-belching chicken buses and the mass of cars that congest the streets of Central America's largest capital, it's hard to imagine a bicycle, much less a mass of them. With one of the highest violent crime rates in Latin America, it's not a place I was planning to explore on two wheels. In fact, I was planning to get out as soon as possible, but circumstances determined otherwise.

So when I saw on Twitter that Masa Critica Guatemala was planning a ride my first weekend here, I decided to drop them a line to see if they might have a bike to spare. "What better way to see a crazy city like this one than with a crazy bunch of bicyclists?" I reasoned. There's safety in numbers, and that's the idea behind Critical Mass, a bicycling movement launched in 1992 in San Francisco and has now spread to more than 300 countries. 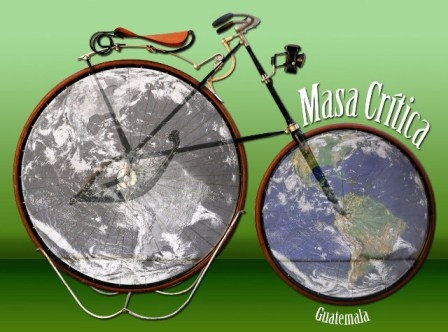 My reply came within just a few minutes. "It will be an honor," said Masa Critica founder Manuel Gómez, and assured me he'd be there at Jocotenango Park with a bike for me. "You'll know me by my beard," he said.

And indeed, it would have been hard to miss him. Gómez cut a robust figure with a bright yellow vest over his green tie-dye Masa Critica T-shirt and a beard that reached halfway down his chest. 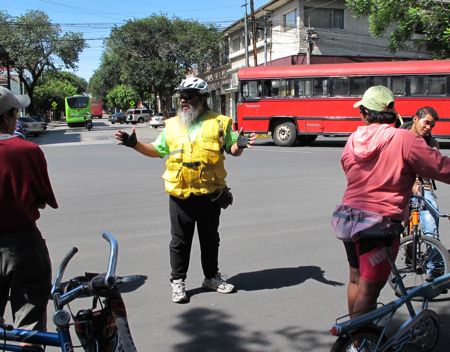 "Bienvenidos a Masa Critica!" he shouted, rolling in with a shiny blue mountain bike just my size.

Gómez, a local chiropractor and acupuncturist, gathered the assembled masses and went over the route and the rules of the road. "Remember to stay together - that's the most important thing!" he said. "Stay to the left. And stay alert!"

It was a far cry from some of the Critical Mass rides I'd seen in Houston, where the riders' objective seemed to be asserting their rights of the road. Here the emphasis was on staying alive. These riders observed traffic laws, were courteous to honking drivers and tried to spread good cheer along the way.

"Some drivers are rude, but I just smile at them," one rider told me. "That way we can show them we are humans, too!"

Few women joined the ride - unfortunately, not many women have taken up bicycling in the capital city. Teresa was one of two besides me.

"I used to love biking, but I lost my enthusiasm when a friend had her bicycle stolen from her while she was waiting for a red light at an intersection," she said. "So when I heard about Critical Mass, I said, I'll be there!" This was her fourth ride.

The two-hour ride wound through all the zones in the central part of the capital: From quiet, residential Zona 2 to Historical Zona 1, past the Parque Central and the unusual green limestone Palacio Nacional (I'm told the locals call it the Guacamole); down into Zona 4 where we passed the Gaudi-style National Theater, where street vendors hawked everything from pirated CDs to socks and shoes; on down to the bustling commercial district of Avenida Bolivar. All in all, an exhilarating ride, and I must say the drivers were at least as respectful as those in Houston.

After the ride, Manuel joined me for lunch at the Spanish-style La Mezquita Restaurant where we dined on Spanish tortillas and paella, and he told me his thoughts on life, health and bicycling.

Here are a few excerpts from our interview:

"Our society in general has a prejudice against people who ride bicycles; they see that development and success are demonstrated by having a nice car. But maybe because of increased media attention on pollution and the health problems caused by sedentarism, we're seeing more people being willing to get out on their bikes, but they're hesitant because of security problems. But we're not really that bad in that respect; there are countries in Europe where hundreds of bicycles are stolen every year. We don't have that many bicycles stolen in Guatemala.

What really is a challenge, on the other hand, is breaking that vicious cycle of sedentarism, and addiction to comfort and passive recreation - they just look and look at electronic devices. Going out on a bicycle is one of the best form of exercise - not just because it doesn't pollute but also because it helps people avoid a whole variety of illnesses. In my practice I've noticed that bikers suffer fewer illnesses.

If we can get our young people biking, not just the athletes but all the young people, we'll see less drug use, and greater enjoyment of the outdoors. On a bike you feel yourself to be part of everything; you're in communication with the wind, with the plants... you have all of this contact with nature, whereas in a car, you don't.

Eight years ago I began an annual bike ride to Coban, 255 km to the north. It was an incredible experience because I was able to hear all the birds and then I was able to see them close up, and I'd never had the opportunity to do that in a car."

Tracy L. Barnett is the founder of The Esperanza Project. She is currently making a journey through Latin America, documenting sustainability initiatives throughout the continent.