The 2012 Awards season officially kicks off next Thursday, January 12 when the Broadcast Film Critics Association holds its 17th Annual Critics Choice Movie Awards -- which will air live on VH1.

This year, the awards take place at the Hollywood Palladium with comedians Rob Huebel and Paul Scheer hosting.

BFCA president Joey Berlin - who co-founded the organization in 1995 and executive produces the CCMAs - sat down with Huffington Post blogger and BFCA member Zorianna Kit to talk about the group's big night. 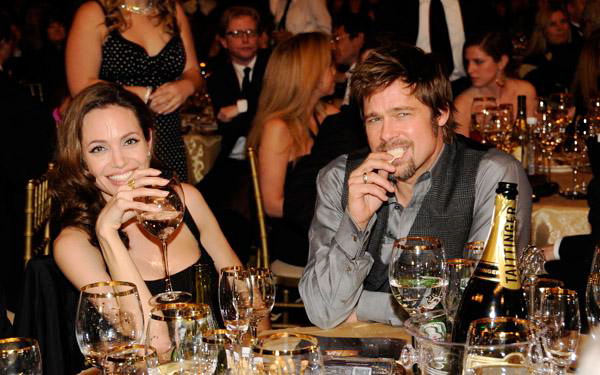 Angelina Jolie and Brad Pitt at the 13th Annual CCMAs

ZORIANNA KIT: With so may awards shows beginning in January and going non-stop until the end of February, how significant are the Broadcast Film Critics' annual Critics Choice Movie Awards?

JOEY BERLIN: Over time we've established this pretty remarkable track record: for some reason our fellow BFCA members seem to be an awful lot like the Academy members. We tend to vote for pictures and performances the same way that the Academy members do. So statistically if you want to get an Oscar nomination, the single best thing you can do is get a Critics Choice Movie Awards nomination. Those winners are usually the same people.

ZORIANNA KIT: Why is that?

JOEY BERLIN: Part of it may be that our voting tends to influence the Academy voting. Academy members get swamped by screeners at the end of the year and they have to make sure they watch as many as they can. Hardly anybody ends up watching them all - there's so many of them! They look to see what our critics group - which is the largest critics group - votes for. Then they make sure to watch the ones that we voted for. (This year, Academy members have until January 13 to decide their nominees - one day after the BFCAs crown their winners.)

ZORIANNA KIT: So basically the BFCA helps them narrow down their choices when they are staring at a pile of screeners and not enough time to watch them all?

JOEY BERLIN: Something along those lines. The gold standard in movie industry for awards is always going be the Oscars and they are voted on by the people who actually make the movies for a living. The catch is that those people who make the movies don't necessarily watch them. We watch them for a living. We have already seen most everything along the way. By the end of the year when screeners are handed out, we're catching up and watching things for second time or third time before we do our voting. We really make a study of it professionally - that's our job. The job of an actor is not to see every other actor's performance. The job of a lighting designer for a movie is not to see all the other movies - it's to design the lighting for the movie that he's working on. So before they vote, they have to figure out a way to catch up on the stuff that's really the most important. And our voice is one of the most important voices in telling the Academy members what they need to catch up on. 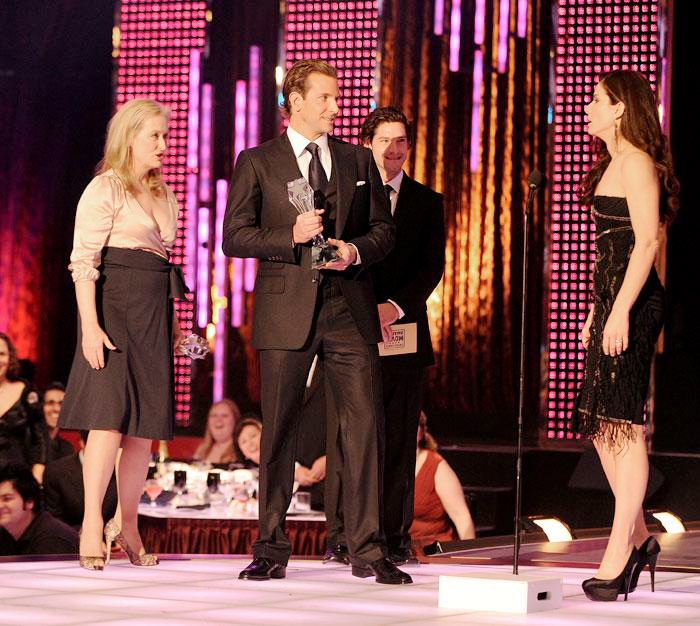 Meryl Streep and Sandra Bullock tie for best actress and arrive on stage to accept their award from presenter Bradley Cooper at the 15th Annual CCMAs.

ZORIANNA KIT: The CCMAs are the first big televised awards show of the movie season, preceding the Golden Globes by just a few days. Is that an advantage?

JOEY BERLIN: I think that's the big reason why we get a lot of attention. This is the first time you are going to see the people who are most likely going win Academy Awards all dressed up, being honored and making their speeches.

ZORIANNA KIT: Their first acceptance speech of many....

JOEY BERLIN: We're the first step. I always think of it as the New Hampshire primary in presidential politics: we're the first stop where people who -- if you're a serious contender -- you have to be there to make the race. So if you really want to win an Academy Award, your first stop on the road that you don't want to miss is the Critics Choice Movie Awards.

ZORIANNA KIT: Let's go back in time. You and fellow journalist Rod Lurie, now a filmmaker in his own right, founded the Broadcast Film Critics Association in 1995. What prompted you to create this?

JOEY BERLIN: We realized that one of the most important part of the movie world was kind of outside the loop of the awards organizations: the journalists on television and in radio who go on the press junkets every weekend and deliver most of the movie news to the largest amount of people. They weren't part of the National Society Of Film Critics or the National Board Of Review or the Hollywood Foreign Press Association. So we thought it'd be interesting if these people who are in the trenches every week bringing the news about new movies to the largest audiences voted on their choices.

ZORIANNA KIT: How did you go from having a great idea to having an actual group and awards ceremony?

JOEY BERLIN: It was really remarkably simple. The first year we put together the first Critics Choice awards show in about three weeks. We went to our colleagues who we saw weekends on the circuit. Everybody thought it was a good idea. We had about 44 members the first season. When we told the studios and the publicists that we were going to do this, they were all supportive in the 17 categories that we had the first year. Fourteen of the winners came in person to accept their trophies.
That first year the CCMAs were held at the Hotel Sofitel as a luncheon with Sense and Sensibility winning best picture. Back then, there were no nominees, just an announcement of winners. By year three, the awards moved to the Beverly Hills Hotel and nominees were introduced for the first time. Over the next few years, the luncheon became an evening show that was broadcast on the E! Network for several years. (Interview continues below slideshow.)

CCMA Nominees, Honorees, Presenters and Winners Over the Years (Part 1)

ZORIANNA KIT: Was there a year that you felt the CCMA finally came in to their own?

JOEY BERLIN: We had the magical year eight, the year that Jack Nicholson and Daniel Day Lewis tied for best actor (for About Schmidt and Gangs of New York). There were three nominees in the category. Robin Williams was the other nominee (for One Hour Photo). When it was announced that it was a two way tie, Jack was so drunk when he got up to accept his award that he said, 'I'm having a hard time here,' and he called Robin Williams up on the stage. Robin helped Jack make his acceptance speech. Of course Robin was the only one of the three nominees who didn't win and he was very funny about that. It turned out to be one of the most hilarious pieces of award show history for any show. Jason Alexander hosted that year. Chicago won the big award and everybody was there from that movie. Catherine Zeta-Jones brought Michael Douglas, her husband. That was the year that it really turned into what it is now - a really spectacular television event with all of these big stars and all of them having a great time.

ZORIANNA KIT: To what do you attribute that change that particular year?

JOEY BERLIN: You always have a thing when you're inviting all these superstars to an event - they all want to know who else is coming, who else is going to be there. By that point it became perfectly clear to everybody significant in the industry: everybody comes. And everybody has kept coming ever since.

Over the years, internet critics were added to television and radio critics. Today membership is at 265, as opposed to the 44 that existed in its first year. The last few years, the Palladium has become the venue, VH1 televises the event and this year it will be broadcast in Canada for the first time on the Super Channel.

The show has grown to include a musical act - last year it was Maroon 5 - and an after-party. This year, the musical act will be Fitz and the Tantrums. Additionally, the BFCA branched out to create the Broadcast Television Journalists Association, which held their inaugural Critics Choice Television Awards earlier this year.

ZORIANNA KIT: What is the role of the movie critic today?

JOEY BERLIN: The role of the critic is to help the moviegoer find the good stuff. It's an expensive night out for some people to go to the movies. Ticket prices keep going up - especially with 3D - and you have to factor in things like getting a sitter or if you go out to dinner first, parking, how many dollars for popcorn.... So if you're going to go do it, we want to help people make the best choices for themselves, to see the movies that they're most likely to enjoy.

CCMA Nominees, Honorees, Presenters and Winners Over the Years (Part 2)