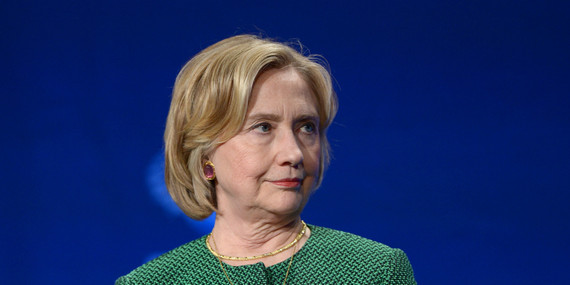 There's a civil war of ideas occurring within the Democratic Party, primarily between supporters of Bernie Sanders and Hillary Clinton. Like most people voting for the Vermont Senator in 2016, I've drawn a clear line in the sand between Clinton and Sanders. My latest Cleveland Plain Dealer article is tilted Bernie Sanders can win and I truly believe that Bernie Sanders will defeat any Republican in 2016 after becoming the Democratic nominee. Similar to other progressives who will vote for Sanders, I see the Democratic Party as two opposing ideologies: you're either voting for Clinton or Sanders, and your choice says a good deal about your outlook of the world.

This divide between Hillary and Bernie camps is growing, and it's still 447 days away from Election Day. Thus far, I've already "unfriended" two people from Facebook, I've succumb to endless Twitter debates, and I've done my best to convince (successfully, I might add) friends and family that Bernie is far better for Democrats and the country than Clinton. However, this battle for the soul of the Democratic Party isn't merely a vapid clash of old regime against progressives tired of Democrats who vote for wars, own personal servers, can't answer simple questions about Keystone XL, and promote unfair trade deals 45 separate times.

No, this liberal infighting isn't only about competing allegiances. It's about values, communication style (one candidate answers questions directly, the other uses semantics as a shield), regulating Wall Street, a debate over Clinton's aggressive foreign policy and Bernie's recent Congressional Award from the Veterans of Foreign Wars, and the future of the Democratic Party. Will the cold "pragmatism" of Clinton's past become our progressive future, or will the Racial Justice Platform of Bernie Sanders and his willingness to break up the banks emerge as the next era of liberal politics?

Ultimately, the supporters of Bernie Sanders and Hillary Clinton have two opposing mentalities. Many Clinton voters believe that any critique of Clinton's scandals should be linked to either Benghazi, or a right wing conspiracy to undermine the Clintons. These supporters usually warn others about never criticizing Hillary Clinton, since often times the belief exists that Bernie Sanders can't possibly win a general election, and any critique would only be used against the "eventual" nominee.

Like Senator Claire McCaskill recently stated, Bernie is a "socialist" who is "too liberal" (oddly enough, the same attacks have been used against President Obama by Republicans), therefore an interesting sense of pragmatism bolsters the view that Clinton is above honest critique. Any reference to Clinton's use of Barack Obama's race during the 2008 election, or Clinton's 3 AM ad against Obama with a "racist sub-message," or Clinton being against gay marriage, or Hillary's Iraq War speech that echoed every one of Dick Cheney's talking points, or Clinton's ties to Wall Street, is considered simply a tool for the eventual GOP nominee to use in 2016.

Inevitably on the part of Clinton supporters, any honest critique, even from a liberal Democrat, leads to the following rebuttal:

Or, my personal favorite, simply one word that summarizes the viewpoint of many Clinton supporters when presented with a logical critique:

True, I've written that Benghazi has been used by the GOP to undermine Clinton in an unfair manner, however not everything is linked to Benghazi. For example, Clinton's latest scandal isn't a GOP fabrication; the FBI is investigating emails for a reason. According to an article in The Hill titled Clinton probe tests FBI chief, even the FBI must defend itself from accusations of partisanship:

FBI Director James Comey is being thrust into the spotlight as the controversy surrounding Hillary Clinton's personal email server intensifies...

The FBI is investigating the security of the former secretary of State's email setup, including if classified information was mishandled. The probe is putting the nation's top law enforcement agency at the center of a political battle leading into the 2016 election...

Polls already show Clinton is vulnerable on issues of transparency and trust with voters.

Therefore, is it rational to call the FBI a partisan agency intent on ensuring Bernie Sanders wins at the expense of Hillary Clinton?

According to some Clinton voters, the FBI is simply part of an overall attempt at undermining Hillary, similar to the uproar over Benghazi. However, is the media also part of the conspiracy? A recent POLITICO article titled Clinton asks staff to turn over email server, thumb drive, highlights the precarious situation faced by the former Secretary of State:

Hillary Clinton has asked her staff to hand over her homemade email server to the Justice Department, her campaign said Tuesday night -- just hours after an independent government watchdog said she had at least two "top secret" emails on her unsecured network.

The FBI opened a probe of the security of Clinton's private email setup after an intelligence community inspector general found four classified messages while inspecting a small pool of just 40 of Clinton's 35,000 emails. Clinton used a personal server rather than a State.gov official address, which goes against transparency rules and has landed her in trouble on the campaign trail.

While her critics have accused her of secrecy, the intelligence community has been worried about whether classified information was at risk or could have been compromised.

As POLITICO states, "an intelligence community inspector general found four classified messages while inspecting a small pool of just 40." Therefore, is it fair mention this fact?

If Hillary Clinton can run a 3:00 a.m. ad with a "racist sub-message" against Obama in 2008, why can't the Bernie Sanders voter address Clinton's ties to Wall Street?

If Senator Claire McCaskill accused Bernie Sanders of being a "socialist" (she used the Fox News definition as a political attack), then why can't Bernie supporters address the ongoing email scandal?

If Anthony Weiner wonders why Sanders became a Democrat after being an Independent, why can't Bernie Sanders people inquire as to why Clinton just recently "evolved" on gay marriage, an issue Democrats were always supposed to champion?

First, Clinton devotees shouldn't just lecture Bernie supporters about never disparaging another Democrat, when Sanders has already been disparaged by McCaskill and Weiner, and after a 2008 campaign where Clinton injected race into the competition. Second, Bernie Sanders has already surpassed Clinton in New Hampshire, and almost every major poll shows Sanders challenging or defeating Clinton and Republicans. Therefore, the time has come for a paradigm shift within the Democratic Party.

I'm a liberal Democrat, and I once wrote an article about a Republican candidate from a progressive anti-war stance, simply because last year Clinton's hawkish foreign policy was the only option for Democrats. This year, Bernie Sanders says "I'll be damned" if Americans are sent back to prior wars for the benefit of Saudi Arabia, and I agree with the Vermont Senator. I am voting for Bernie Sanders in 2016 because on the major issues, he's a progressive, not a conservative like another candidate.

Also, my critique of Clinton, and the critiques from other Bernie Sanders supporters shouldn't be met with the same old tired rebuttal, as if Clinton were an untouchable saint within the pantheon of liberal politics. If we're ever going to advance from voting alongside the GOP on wars and environmental issues, then let's never again hear the following phrase, when presenting an honest and genuine critique of the former Secretary of State:

Finally, this exchange between a reporter and Clinton in Iowa highlights exactly why relevant critique should be addressed pertaining to Hillary Clinton. According to a CNN article titled Clinton says her email controversy 'has nothing to do with me', the following answer to a relevant question is worthy of analysis:

"Did you wipe the server?" asked a reporter after a town hall in Nevada.

"What, like with a cloth or something?" Clinton joked, making a wiping gesture.

She added later that she didn't know "how it works digitally at all."

Clinton argued, as she has before, that she went above and beyond in handing over her email.

The former Secretary of State, who now is running for President of the United States, apparently doesn't know how the question "Did you wipe the sever?" relates to her email controversy. Does this make sense?