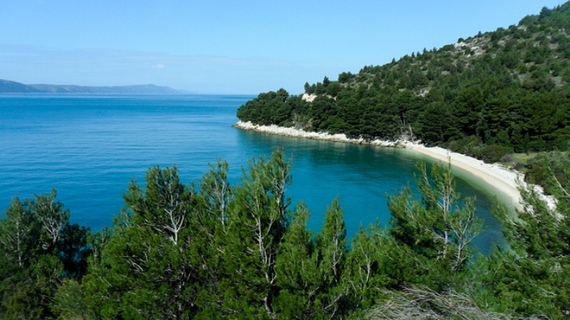 The scene is like something out of a dream: The sea stretches for miles, piercingly blue and dotted with mountainous islands hazy in the distance. The shoreline is rocky and white, and dusty-brown mountains jut into the sky behind it. At sunset, the cities along the coast take on a faint pinkish glow as the light bounces off their terracotta rooftops.

Before I arrived in Croatia, people told me that it was one of the most beautiful places in Europe. "If you love Italy, you'll love Croatia," they said. "After all, the Croatian coast is where the Italians go to vacation." Most of Croatia's coast is along the historic Dalmatian region -- a place that perfectly meshes Italian and Eastern European inspirations in architecture, food, and even language. 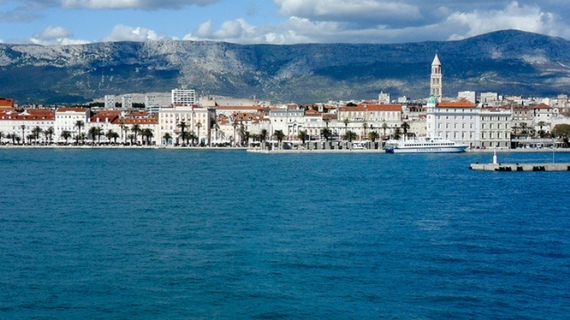 I based myself in Split--the second-largest city in Croatia and the hub of central Dalmatia--and for only $750 a month rented a small, exposed-stone studio apartment just outside the 2,000-year-old palace built by the Roman emperor Diocletian.

Today it serves as a pedestrian shopping hub. In the summer, it is a riot of color and sound, as salsa dancers take to the main squares in the evenings to strut their stuff.

Just outside the palace is the Riva--a short, perfectly-kept pedestrian path along the harbor. This is where you'll find the locals on sunny days, walking their friendly, well-behaved little dogs, dangling their legs over the side of the stone harbor, or sitting on the massive café verandas and soaking in the view with a very authentically-Italian cappuccino, which costs less than $2, in hand.

Split's other local treasure is a park-covered hill called Marjan. Here stone steps and paths lead through the forest, winding past pretty churches and lookout points with views of the sea and its distant islands. At the beginning of the park, midway up the hill, you'll find a popular local coffee shop called Caffe Bar Vidilica, which boasts some of the best views in the entire city.

Despite my love affair with Split's sunny Riva and perfectly-preserved palace, I discovered my real passion for Dalmatia along the coasts to the south of the great city. Here the mountains creep ever closer to the sea and the crowds thin.

From Split, it's easy to rent a car--or, for the brave among us, a motorcycle--and speed down the coastal roads with their breathtaking views, stopping to take in authentic, small-town Croatia along the way.

One of the first charming small towns you'll encounter is Omis. Nestled against the coastline, Omis is where the crystal blue Cetina River flows into the Adriatic Sea. On either side of the river, imposing gray cliffs rise into the sky, sometimes dotted with rock climbers. Between these cliffs, you'll find a favorite local restaurant--Kastil Slanica--where locals and savvy tourists gather on the pretty stone patio to enjoy fresh seafood and riverfront views.

If you continue south from Omis for about 20 minutes, you'll find yourself in Brela. Visit Brela in the summer and enjoy cocktails, sea views, and a steady buzz of conversation at the busy Južnjacka Utjeha beachfront bar just outside town. Stop by in the off-season and you'll think you're on a secluded Caribbean island. The islands off the coast of Split are an equally beautiful place to explore--and are easily accessible by ferry. 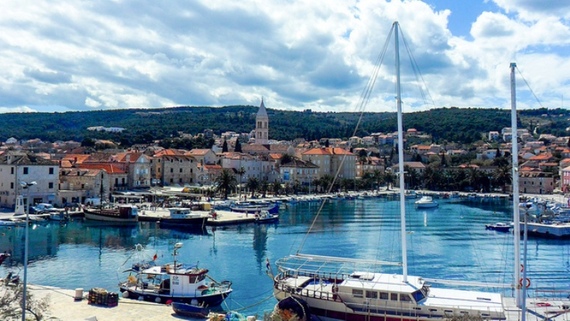 The largest island is Brac, home of the small fishing town of Bol, which becomes a bustling tourist mecca in the summer. Just a few miles west of Brac, its sister island, Hvar, boasts one of the oldest towns in all of Europe: walkable, cobbled Stari Grad, with its waterfront cafés, UNESCO-recognized old town, and bustling sailboat harbor.

While those large islands draw the majority of the tourism, the island that most captured my own heart was tiny, green Solta. Even in the summer, this island draws relatively few tourists. Instead, retirees and families retreat to their summer homes here to walk along the natural paths that follow the coast from the port town of Rogac, and to savor authentic local food in family-owned restaurants like Konoba Momcin Dvor, located just a couple miles from the port in the village of Grohote, where I had the best meal of my entire trip.

Because there are few tourists, the people of Solta tend to welcome them with open arms, treating visitors like family. During my own visit in the off-season, the coffee-shop owner near the port closed the shop (which was empty at the time) to drive me up the hill to a local restaurant because it was windy outside and he was concerned that I would catch a cold.

But the best part is that the sunshine, Italian-inspired architecture, and natural beauty of Dalmatia costs much less than a typical European vacation. My own month cost just over $1,300, not including plane tickets, and you could easily spend less by choosing cheaper accommodations (listings on Airbnb.com start around $450 per month for a private room in a family home).

The best times to visit Dalmatia are May or late September to mid-November. In the mid-summer, Dalmatia is very hot and more crowded, but as the season slowly begins in May or slows into the fall, the crowds thin and the weather turns temperate and beautiful.