Two people in Florida were bitten by a crocodile in an attack that may have been the first of its kind.

Alejandro Jimenez, 26, of Doral and Lisset Rendon, 23, of Miami were treated at a Miami-area hospital and released after being bitten by an 8-to-9-foot croc while swimming in a Coral Gables canal at about 2 a.m. on Sunday, the Miami Herald reported.

"They started swimming and apparently at some point they came face-to-face with a nine-foot crocodile," Jorge Pino of the Florida Fish and Wildlife Conservation Commission told the Sun Sentinel.

The paper reports that Rendon was bitten on her left shoulder, while Jimenez was bitten in the hands and torso.

The swimmers apparently ignored warning signs on the canal, where two crocodiles have been living for more than a decade, according to WPLG Miami.

Locals have even nicknamed the crocs Pancho and Snaggletooth.

Wildlife officials are now trying to trap the crocs and relocate them to a wildlife sanctuary, but not everyone is happy with the plan.

"I think they were standing their ground," Elizabeth Bustin told the station. "That was their territory. Somebody came into it unexpectedly. They didn't go for the throat, they didn't tear a limb off, they bit. If you want to go swimming at 2 a.m., go swimming in a pool, not the canal."

The Florida Fish and Wildlife Conservation Commission told WVSN in Miami that this is the first confirmed crocodile attack on humans in the United States.

While other attacks have been reported, they have not been confirmed.

American crocodiles are shy and nocturnal, and live in Florida, Mexico, Central America, the Caribbean, and northern South America, according to National Geographic.

The species suffered a decline in the mid-20th century due largely to hunting, the IUCN Red List said. Since being protected in the 1970s, the American crocodile population has started to rebound.

However, the agency warns that the crocs are still hunted illegally, and also face habitat loss due to coastal development.

They are currently listed as vulnerable.

Crocodile Bites 2 Swimmers In Florida, Believed To Be First Attack On Humans In The U.S.
American Crocodile Rebounds In Florida 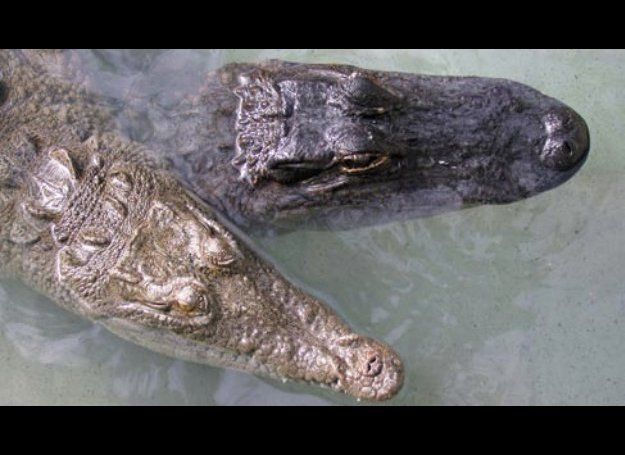 1 / 14
Crocodile vs. Alligator
How to tell the difference: Crocodiles are lighter, grayish-green in color. They sport a more tapered snout with an exposed fourth tooth both sides of their closed lower jaw. Additionally, if crocs have markings they are dark stripes on their tail and body. Alligators are darker, black in color with a broad, rounded snout and no exposed teeth when the jaws are shut. If present, an alligator's stripes are light in color on its tail and body. Source: FWC
FWC