Not content with the loosened campaign finance rules made possible by Citizens United, the GOP is attempting to pass a stealth provision that would open the big money floodgates even further. Republican leaders added the measure at the last minute to the so-called "CRomnibus" spending bill now under consideration in Congress.

As reported by Politico:

A provision tucked deep inside the $1.1-trillion spending bill filed by Republicans on Tuesday night would dramatically increase the amount of money a single rich donor could give to national party committees each year -- from $97,200 to as much as $777,600. The provision, inserted as a rider to the bill only hours before it was filed, would mark a further erosion of campaign cash restrictions. 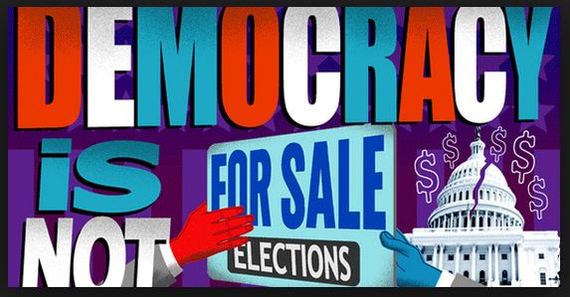 The provision was hidden on page 1,599 of a 1,603-page bill. NBC News reported that House Speaker John Boehner, "along with Senate Minority Leader Mitch McConnell, (both) pushed for the campaign finance measure, according to an appropriations committee aide."

He's attempting to drastically expand the influence of the wealthy and well-connected without even introducing a bill, holding a hearing or allowing a direct vote. By tucking this into a 1,600-page funding bill, Mitch McConnell is essentially saying 'auction off our democracy or I'll shut down the government.'

Act right now to tell your members of Congress to reject this deal, which would further increase the corrosive influence of big money on our democracy. You can send them a quick e-mail using this tool provided by Public Citizen: 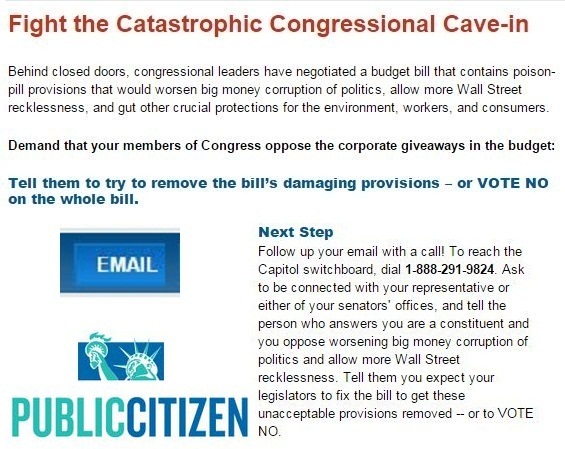 The Hill's constantly updated whip count for this bill shows opposition growing among Democrats and even some Republicans. Observers agree Speaker Boehner needs a substantial chunk of House Democrats to support the spending bill in order for it to pass.

The House is expected to vote on the spending bill sometime on Thursday, with the Senate facing a midnight deadline to pass it. Republican leaders have said they would offer a substitute spending bill to fund the government through January if the CRomnibus is rejected.

Another measure in the bill would give taxpayer subsidies to Wall Street derivatives trading, as first reported by HuffPost. The office of Sen. Sherrod Brown (D-Ohio) called the deal a "Wall Street giveaway."

On Wednesday, Sen. Elizabeth Warren (D-Mass.) urged Senate Democrats to oppose the spending bill, denouncing it as "a giveaway to most powerful banks in this country." 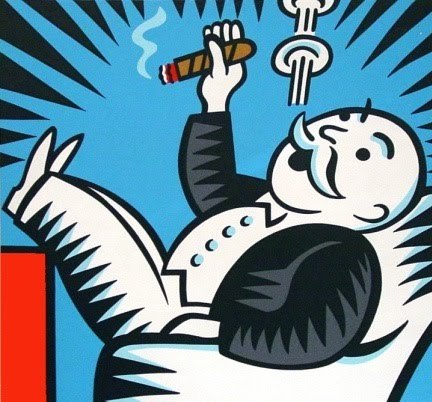 House Minority Leader Nancy Pelosi said Democrats are "deeply troubled" with the bill's measures. On Wednesday, Pelosi declared, "These provisions are destructive to middle class families and to the practice of our democracy. We must get them out of the omnibus package."

Rep. Ted Deutch (D-Fla.) and other House members -- including Reps. Alcee Hastings (D-Fla.), Donna Edwards (D-Md.), Jim McGovern (D-Mass.) and Jared Polis (D-Colo.) -- issued a joint release calling for the provision to be removed or else they would not support the bill.

An amendment offered by Rep. Deutch to remove the campaign finance provision from the CRomnibus spending bill was not adopted in a House Rules Committee hearing on Wednesday night.

Take five minutes today to email and call your members of Congress. Tell them to reject this blatant attempt to allow the super wealthy to buy more elections!