(Scroll down for full photo and video.)

BERLIN (AP) -- Heidi, the cross-eyed opossum, is the latest creature to rocket from Germany's front pages to international recognition, capturing the world's imagination with her bright, black eyes turned toward her pointed pink nose.

Since the first photos were published in December, the marsupial from Leipzig Zoo has attracted more Facebook fans than Chancellor Angela Merkel. By Wednesday more than 111,000 fans from as far away as Bangkok and Montreal and clear across Europe were exclaiming "so cute!!" and "so sweet."

Experts say that like Knut, Berlin's famous fluffy white polar cub who was abandoned by his mother, and Paul, the late octopus who correctly predicted the outcome of all of Germany's 2010 World Cup games and Spain's victory in the final, the hype surrounding Heidi is fed by a human weakness for cuddly looking critters and the ability of modern mass media to spread images around the globe instantly.

Bangkok resident Julie Queen-Vichitthanarurk said she heard about Heidi on the local radio station on the way to work, and raced home to find a picture on the internet and become a "fan" on Facebook.

"Right away when I saw her picture, I feel in love with her!" the 40-year-old told The Associated Press in an Facebook message. "There is just something so sweet about her that made my heart melt." 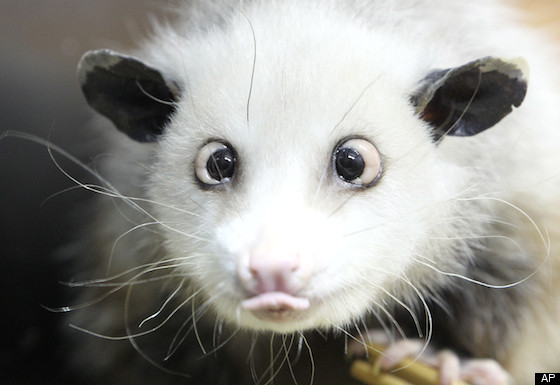 It is exactly that feeling that humans crave, making such "cute" animal images so popular.

"It triggers a reaction in our unconsciousness, when we see these creatures that make us think of children," said Peter Walschburger, a biological psychologist at Berlin's Free University.

"Animals are so innocent - in a way that we no longer are," said media expert Steffen Damm. "They remind us of our lost connection to nature."

Leipzig Zoo insisted the "media resonance was surprising and not planned," but it has nevertheless moved to protect the rights to her name and cross-eyed image - believed to be the result of pressure on her eyes created by fatty deposits. The zoo says the squint doesn't hurt her.

Heidi first attracted attention after a local TV report about her upcoming home - a new nocturnal enclosure in the tropical environment - featured her as one of several animals in quarantine until it opens July 1. She will share her enclosure with her sister Naira and their male companion, Teddy. All three arrived at Leipzig Zoo on May 5, 2010.

"She definitively won't be Germany's next Super Opossum," zookeeper Michael Eisner told MDR television, as Heidi squinted up at him from a cage for a documentary about the zoo in December.

He couldn't have been more wrong.

The clip attracted so much attention on the internet, the station has developed 10 episodes featuring Heidi and a local stuffed animal manufacture, Koesen, has adapted its line of plush opossums to include a white one with black ears and, of course, crossed-eyes.

While Leipzig Zoo says it is not actively engaging in marketing at this time, the attention will most certainly boost admittance, and thus revenue.

The Berlin Zoo recorded a 27 percent jump in 2007, the first year of polar bear cub, Knut, whose image as a playful cotton-puff ball of bear fuzz captured hearts around the world. That included U.S. star photographer Annie Liebowitz, who snapped him for an environment issue of Vanity Fair. The attention brought nearly euro6.8 million (then $10.7 million) in revenue.

Some animal rights activists, however, maintain the attention is a further form of abuse of animals that are already suffering from their captivity.

"These animals are put on show for millions of people, but afterward they remain incurably crippled," said Edmund Haferbeck, an animal expert with Germany's branch of the People for the Ethical Treatment of Animals.

He said he could not name a case where animals benefited from the hype created by the media attention - including Knut, whom he said still languishes in an enclosure much too small for him.

"On the contrary, it is completely counterproductive," Haferbeck said. "The money they generate is not put toward improving the zoo, but go into their (strapped) budgets."

Not every animal is able to generate such interest. Nuremberg zoo, in southern Germany sought to create attention similar to that generated by Knut when it found itself with a polar cub of its own, Flocke, born in December 2007. But she never really created hype.

Nor did another polar cub, Willbaer, or an attempt by the Chemnitz Zoo during the 2006 World Cup to have its animals predict the outcome of games - attributed to elements of timing, how an animal's particular story or affliction is able to hit the public's nerve at any given moment, a pattern known to humans for centuries.

"It recalls ancient Rome, where exotic species were applauded in the Circus Maximus," said Damm.