My 2-year-old daughter and I have a routine we do every now and then and it goes like this:

Sometimes, just for fun, I'd ask silly questions and she would still answer "Mama!"

We have another routine in which I ask her, "Can Mama give you a machine gun kiss?" She'd pause and think. Sometimes she'd stick out her pointing finger and say, "Just one" and I'd give her a peck on the cheek. But when she says "Machine!" I'd grab her and give her many kisses in quick succession.

My husband wondered aloud one day, "How many times do we hug and kiss our kids?" It's kind of hard to keep track especially with machine gun kisses. But one thing is for sure: we give more hugs and kisses than Japanese parents do. In all the times I have gone to parks, play groups, and children's play centers here in Japan, I have yet to see a Japanese parent kiss and hug their kids. If you understood Japanese, you would probably never hear a Japanese parent say "I love you."

It is not that the Japanese culture is completely devoid of physical affection. After all, it is the Japanese who coined the delightful term "skinship" to express that closeness between parent and child. Where American parents might be squeamish, it is fairly common for Japanese parents to take baths (ofuro) with their kids. It is also typical for Japanese families to sleep together in one futon. Both can last well into their late elementary years.

I come from a Chinese family and it is, in many ways, culturally similar to the Japanese. For as long as I could remember, my parents hardly ever hugged or kissed us, or each other. Nor did we say "I love you" to each other. My parents share the same sentiments as Japanese parents: I don't need to say "I love you" because I say it with my actions which are weightier than words. Don't I provide for all your needs, send you to a good school, make sure you eat well, etc.? I remember longing for the Hallmark/Hollywood kind of affection that I thought was "normal." Now that I'm older, I don't see my parents' ways as right or wrong but just a different way of being.

I shower my kids with the affection I craved for as a child. I think that affection makes a child secure enough to explore the world on their own. Put in another way, through my affection, my child comes to believe, "I can go and check out what's around that bend because I know my Mommy loves me and she will be there for me. She will wait for me and if I don't come back, she will look for me." I notice that even as early as a year old, my daughter would go off on her own where I can't always see her, while other kids her age would roam only about a meter away from their moms. I pointed this out to my husband and he said that if a Japanese mom watches how my daughter and I interact, she would say, "Look at that child wander off like that. She's obviously not emotionally close to her mom."

This made me think about how I want my children to be independent and through the affection that I give them, I create a secure environment that encourages them to go out on their own. Japanese parents, on the other hand, tend to raise their children to be dependent on them and the group. This manifests more clearly in how they discipline their children. It is not not unheard of to lock children out of the house as they cry and are made to realize how much they need their parents. Children are also socialized to think about how their behavior affects their parents and other people. When they misbehave, you could hear Japanese parents complain, "You make me feel bad. You make me ashamed." When I did something my parents didn't approve of, my mom's favorite line (which is also common here in Japan) was: "What will other people think? What will other people say?"

The upside to child-rearing in Japan is that you raise children who are very conscious of group membership and belonging and behaving in ways that does not upset the group. It is what makes Japanese society so orderly, peaceful, and harmonious. On the other hand, kids in Japan sometimes grow up unsure of themselves and relying too much on what others in the group think than coming up with their own ideas and opinions. This is part of the reason people have an impression that Japanese are often shy and quiet. A friend noted that my daughter, compared to Japanese kids her age, seems more passionate, vibrant and spirited.

This is not to say that the Western way of raising and disciplining kids is without fault. Western parents give their children messages that are often overly optimistic -- "You can be anything you want" -- something you would never hear a Japanese parent say to their kids. Sure enough, Western kids end up having unrealistic expectations about themselves. Interestingly, American teenagers rank number in one in the world when it comes to self-confidence, number 35 in terms of math scores. They might be confident if not always correct.

My husband and I are both foreigners in Japan, and even the cultures we were raised in are so different: American and Chinese. This has given me a chance to see childrearing from so many different perspectives. What I have come to understand is that if you want insight into childrearing you need to look at the culture these kids will grow up in. Japanese is more group-orientated where the individual is less important than the group. Western, on the other hand, prizes the individual. It would be a narrow view to believe that one is better than the other. With our family, we choose to take what works for us, with the earnest hope that it will help our kids thrive in an increasingly globalized world. 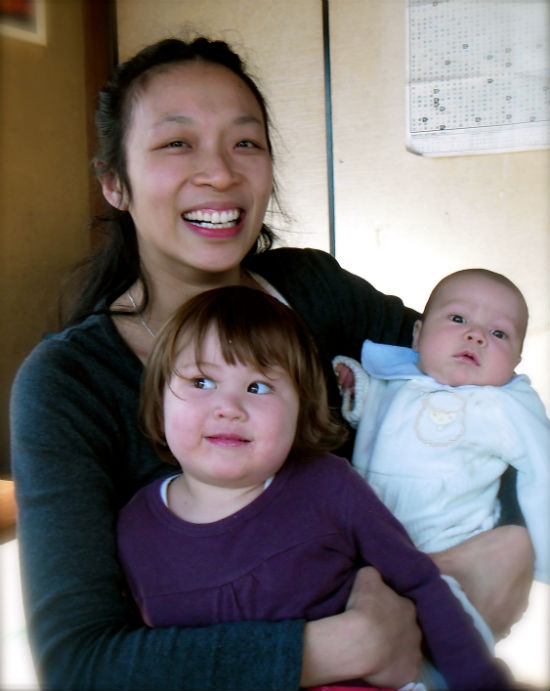