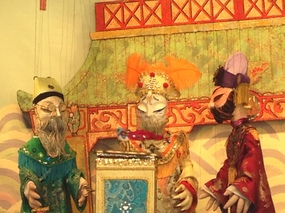 On an unbearably hot Saturday afternoon, after a stir-crazy morning at home, and so much indecision about what to do, I loaded my three children into the minivan and drove them to Children's Fairyland. It's a 65-year-old Oakland institution, a children's theme park that illustrates fairy tales through rides and themed displays. My three- and six-year-olds were eager to go, while my nine-year-old son came begrudgingly, having outgrown his interest in the park.

As I flashed our family membership card at the ticket office, I was excited to notice a Chinese-themed puppet show, "The Emperor's Nightingale," was scheduled at 4pm. I made a mental note to take the kids, who are of mixed Chinese and Greek heritage, hoping that the puppet show would be a cultural opportunity they could relate to. We passed a couple of hours in the park, with the kids enjoying climbing the pirate ship, riding the train, and going through Alice in Wonderland's maze of playing cards. Finally, it was time for the puppet show to begin.

We quickly picked the shadiest seats, right in the front row but behind the pink line--the do-not-enter zone. A park employee explained their strict rule that if any child should cross the pink line that the show would immediately stop and the curtains would close -- presumably to prevent kids from rushing the stage. As the show began, I was delighted by the set with its beautiful colors and textures. However, that feeling was quickly replaced with shock and disappointment as the puppets appeared. I cringed at their facial features, in particular the eyes, which were an exaggerated stereotypical caricature of enormous diagonally slanted eyes, so closed into slits that they appeared shut.

I looked at my children, who have epicanthal folds of varying degrees, and wondered how this racist representation of Chinese eyes was sinking into their psyches. At that moment, my nine-year-old son turned to me and asked, "Mom, why do their eyes look like that? It's so racist." He stood up and stated emphatically, "I want to step over the pink line." He wanted to put an end to the show and close the curtains.

As a parent, I was both proud of my son's ability to articulate his feelings and social analysis, but also crushed that he was put in a position to analyze and react to a racial caricature. Instead of experiencing a cultural performance that reinforced Asian culture and pride, he'd been subjected to a racist representation. It brought to mind the discussions we'd had about racism after my son's classmate targeted Asian kids with racial slurs, while using his fingers to pull his eyes out into slits. Not only are children capable of having discussions about race, it is necessary to give them the tools to understand and reject actions and words that denigrate others.

At my son's request, we made our way to the park exit. On the way out of the park I stopped by the gift shop and asked to speak to someone about the puppet show. An Asian employee stood behind the counter and asked me with a friendly expression, "Do you have feedback about the show?" I simply said, "Yes, I do." But internally I was swirling in questions. What did he think of the show? If he was offended, as an employee would he even have the ability to protest? Was he happy that I was going to complain? Was I being overly sensitive?

An African American manager came out and listened to our experience with respect and patience and promised to speak to the puppet master about our concerns. I was relieved to be speaking to someone I could assume was well versed in racial politics, and the effects of racial caricatures. And I was shocked to hear that the puppets had been designed for the production. I'd assumed that they were somehow inherited, that maybe lack of funds had led to using hand-me-down puppets despite the stereotypical appearance. As we spoke my son sat on the floor crossed-legged, his arms folded across his chest, an instinctive act of civil disobedience.

On the Fairyland website, there is a discussion regarding the elements of good and bad in drama, the necessity of conflict for a story to hold tension, and how this might present a dilemma for some parents. The website calls it a "Mediated Learning Experience" - an opportunity to discuss disturbing or complex concepts. I mourn and resist the fact that I need to talk to my young children about the racism that will be directed toward them, but I also know that it's the only way to prepare them and validate their experience. As parents, we must overcome our resistance to having "disturbing or complex" discussions about race with our children. It is the only way that we can raise children into adults that are assertive, culturally sensitive, and do not to perpetuate social constructs that keep racism alive. And as my son taught me that day at Fairyland, no matter what your age, when you see injustice, speak up, protest, and ask for change.