Crotchless panties at a children's store? Nope, we're not kidding:

"[The store has] cuddly little backpacks, and pretty little princess dresses," French told the station, after she made the discovery. She captured video of the panties with a cellphone camera.

The owner told the station that the store sells mostly kids' products, but that a small portion of the merchandise is geared toward teens. The shop has since pulled the panties from shelves, 9 News reports.

But it's too late, because news of the kiddie lingerie has already hit the Internet. The Heckler Spray blog wonders: "The owner of Kids N Teen says that 25% of her merchandise is actually for teens, which explains the whole crotchless knickers thing, right? Wait. Are they saying that it is okay for minors to buy crotchless knickers? Is that what's going on here?"

Jezebel points out that the panties looked small in the footage, but "If the underwear that's obviously meant to be used during sex was intended for a 14-year-old's wardrobe, that's a different story." We definitely agree; it's hard to argue that adult products like this should be displayed on the counter for teens to purchase at the mall.

This isn't the first time underwear for kids has come under fire for being too provocative. This summer, a French line called Jours Apres Lunes controversially hawked bras and panties for girls ages four to twelve ("filles" and "femmes") and a "loungerie" line for girls ages three months to 36 months ("bebes").

See screenshots and watch the video from Colorado's 9 News below: 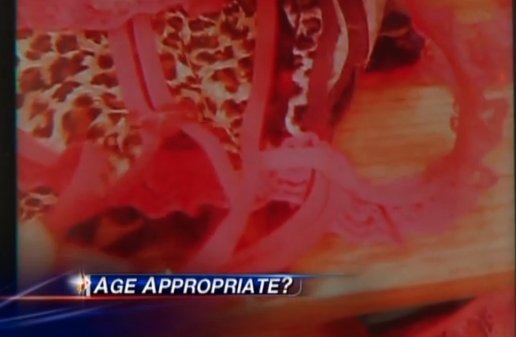