Are you a Veronica Mars fan? When Rob Thomas, creator of the popular television series, couldn't get a budget from Warner Bros. to make a Veronica Mars feature film, he turned to the crowdfunding site Kickstarter. Thomas raised $2 million on Kickstarter in 10 hours. By the end of the campaign, he had raised $5.7 million, along with tons of publicity and invested fans. The Veronica Mars movie comes out in March! 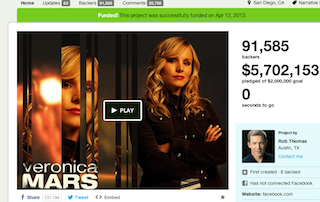 Crowdfunding is persuading many individuals (a "crowd") to fund your project with small donations -- typically in exchange for a "reward" or "perk." A donation might be as small as $1 in exchange for a free music download or as large as $1,000 in exchange for tickets to attend a red-carpet movie premiere (one of the rewards for the Veronica Mars campaign!). The more donors, the more cash you raise. If you get thousands of donors, you could raise some serious cash. This concept has made the traditional method of trying to raise financing -- from wealthy individuals or big corporations like Warner Bros. -- on its ear. And that is a godsend for entrepreneurs!

Today, many websites enable nonprofits, artists, musicians -- and yes, businesses -- to raise money via crowdfunding. These websites, such as Kickstarter and Indiegogo, act as "intermediaries." They provide platforms that host crowdfunding pitches. If you want to raise money for a project, you develop your pitch, post it on a crowdfunding site and use social media to get the word out about your crowdfunding campaign. Here's the pitch for The Veronica Mars Movie Project.

The intermediary takes a cut of the money you raise. Kickstarter collects five percent. On Kickstarter, if you fail to raise the amount you stated as your campaign goal, you do not get any money. Indiegogo takes four percent if you raise your stated campaign goal and nine percent if you do not. Either way, you get to keep the money you raised. Unlike more traditional methods of funding projects, crowdfunding sites take only a small percentage of a user's collection, allowing them to retain ownership and license over their business idea.

The remarkable success of Thomas's Kickstarter campaign proves that crowdfunding has arrived. The explosion in crowdfunding's popularity is related to the American Jumpstart Our Business Startups (JOBS) Act, which President Obama signed into law on April 5, 2012. Raising capital is strictly regulated by the Securities and Exchanges Commission. The JOBS Act, however, provides new exemptions for the use of internet "funding portals" that enable artists and small businesses to use crowdfunding to raise money. 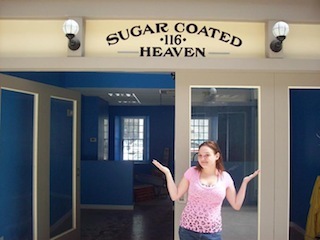 A NFTE grad who is using crowdfunding to open this store.

Kickstarter only hosts pitches raising money for creative projects -- like films, albums, books or games. But other crowdfunding sites, such as IndieGogo, are great for raising money to start any type of business or fund a project. Whether you need $2,000, $20,000 or $2 million, if you think you can use social media to excite people about your business, consider crowdfunding before you approach banks or investors. It's become a truly viable alternative source of funding for artists and entrepreneurs. NFTE graduates have used crowdfunding to get their own businesses off the ground. Twenty-year-old Jennifer, New England's 2013 Young Entrepreneur of the Year, is using a gofundme in order to get funding for her forthcoming Sugar Coated Heaven shop in Providence, R.I. Another recent grad, D'Anna, used the site to raise money for her college tuition. Jonathan, a NFTE alum who is studying entrepreneurship at college, is using Fundly to fund his study abroad internship in Ireland next year. 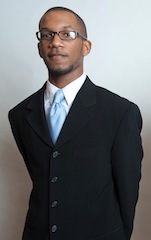 This NFTE alum is using crowdfunding to support his study abroad internship.

There is even a significant social and charitable aims that use the crowdfunding concept. The most well-known and successful, Kiva.org, is a microfinance organization that allows consumers to pool and loan money to those in need, via both nonprofit and profit partners. However, unlike some of its for-profit peers, Kiva does not collect anything from users and is supported by outside funding, just as NFTE is.

Researchers from the MIT Media Lab created an affordable, professional 3D printer for the masses, and the masses responded with more than 2,000 backers and nearly $3 million pledged (far beyond the project's $100,000 goal).

Chicago designer Scott Wilson's TikTok and LunaTik wristbands, which converted the Apple iPod Nano into a watch, attracted 13,500-plus backers, and almost $1 million in funding. He'd asked for just $15,000. TikTok and LunaTik are now sold by Amazon, Walmart and Apple.

Amanda Palmer's record deal is the highest funded Kickstarter music project ever, breaking the million-dollar mark for her record, Art Book, and tour with the Grand Theft Orchestra. Her original goal of $100,000 was reached within a day.

Diaspora is an open source social network created by four young programmers from NYU. The students blew through their original $10,000 goal to raise more than $200,000 from 6,479 backers -- including Facebook founder Mark Zuckerberg

How much money do you need to start your business? Unofficial statistics about Kickstarter reveals that successful campaigns have raised on average around $8,000. Around 50 percent of crowdfunding campaigns fail to reach their target goals.

There are three crowdfunding models:

On an "all or nothing" site like Kickstarter, pledge money is only collected from donors if the target amount is raised by the deadline set by the campaign's creator. If the target is not reached, the project is deemed a failure and no money will be collected.

Indiegogo uses this model. The campaign founder gets whatever amount is raised, whether the target is reached or not, but the intermediary's cut is typically higher if the target is not reached.

Bountysource is a crowdfunding platform that supports open-source software development. Bountysource enables users to support their favorite open-source projects with "bounties" -- donations given to a developer who completes a task or project. This has turned out to be a great model for coding projects.

Here are some tips for getting the most out of the crowdfunding revolution:

Both you and your donors will likely try harder to make your campaign a success if it's an all or nothing proposition! People also are more likely to pledge -- and pledge more -- if they know you'll only get the money if you make the campaign a success.

2. Make sure you have an exciting story to tell -- and use a video to tell it!

Campaigns with videos are much more successful. Be yourself in your video and keep it short (three minutes or less), with a clear call to action. Don't forget to explain how you intend to use the money you want to raise.

Crowdfunding is a great financing tool, but it's also a marketing tool. Use your campaign to spread the word about your fabulous product or service online and build a community of hardcore repeat customers on your Facebook business page and Twitter feed. Send out press releases at the beginning, middle and end of your campaign to get write-ups in local papers. Keep the excitement going!

4. Use crowdfunding to test, prove and tweak your business.

You will gain tons of information from a crowdfunding campaign regarding the demand for your product or service and how to improve it. Ask for feedback in your pitch -- it's as valuable as money!

Set the funding goal too low and you may not raise enough money to execute your plan. Set it too high, and you might not attract enough donor pledges to meet your goal.

6. Make sure your perks/rewards are cool -- and valuable.

Get creative with your rewards and make sure they offer real value in exchange for their price.

Crowdfunding consultant Seeding Factory recommends running campaigns for only 20 to 40 days. It's hard to keep the excitement going for much longer than that.

8. Be prepared to commit a lot of your time.

For a campaign to succeed, you're going to have to throw yourself into it, networking day and night on social media.