Obama did it. Filmmakers are doing it and now you can do it too. 'Crowdfunding', a spin on 'crowdsourcing', is the latest funding opportunity at a time when our funding institutions are failing. With the success of crowdfunding campaigns like wikipedia.com and threadless.com, the financing of projects and people by (large) crowds is on the rise and a new tool to fund even the smallest of projects is now available to the general public.

In the best of times, there is always a sense that there are great ideas out there with little or no chance of funding from traditional channels. According to web-preneur Perry Chen,

"the biggest trend we've seen so far: even during this economy, people are generous. One reason why: people are getting big responses from their networks as people leverage their Flickr groups and other niche communities to spread the word about their projects. Also, small amounts are key. We need to move away from looking for big checks and learn to embrace small amounts. I love people who pledge $1 or $5 to a project. Why shouldn't we be able to become a patron each other for the price of a cup of coffee?"

Enter KickStarter.com a free (for the moment) online platform that uses 'crowd funding' to seed small projects with big communities. Although still in beta, the funding platform launched a few weeks ago is for everyone from artists to entrepreneurs to students. Contrary to online investment mechanisms, Kickstarter's site says that: "People who use KickStarter to fund their projects ("project creators") keep 100% ownership and control." 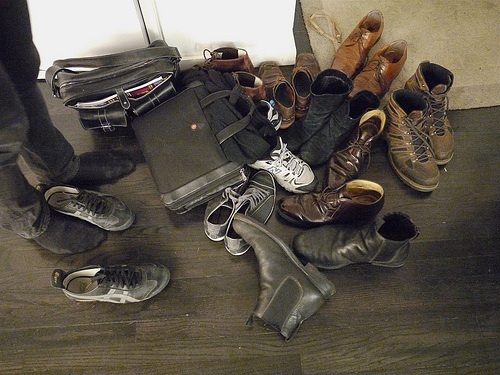 How does one crowd fund that project you've been forever putting on the back burner? To find that out, I turned to KickStarter.com founder, Perry Chen.

What is the key to crowdsourcing for money or 'crowd funding'?
A focused project. I think we want to rally around things with specific goals. Making people feel like they are a part of something. This starts with a compelling story -- why I should support you -- and then a determination to spread the word.

There is a great concept coined "Empowered Interactivity" by the writer Mark Hughes (from his book BuzzMarketing). Paraphrasing,

"Create a mechanism where people have an observable impact, and it becomes their brand, their 15 minutes of fame, their outcome."

If you already have a large social network, will it help you get funded more quickly? No question. Each person you know is an amplifier to each person they know. We all have a social network, and the key to crowd-funding is sculpting your project and presentation so that it amplifies past that first degree of your network. If it's compelling, people will forward it.

What if you don't have lots of online presence before using KickStarter, how do you raise awareness and get funded?
It might not be the sexiest thing, but email is still extremely powerful. Send a rallying cry to friends and family, encouraging them to forward along. Reach out to relevant blogs and organizations. Become a marketer.

You can also go small. One of our first projects (and we are only starting our 2nd week) was a programmer named Dan Phiffer who raised $99 to build a Wikipedia iPhone application. The funds will go to pay the Apple's iPhone application fee. He was fully funded in a few days.

What can people do to make their idea stand out overall?
Video! It's not required to fund a project, but we strongly encouraged it. Doesn't need to be Kubrick, some of the best video are just people talking about their projects. Their passion comes across, we can connect.

Along those same lines, offering benefits or rewards that have charm or value is a huge boost. If you just put your hand out, it's not that interesting. Everyone can offer something in return.
One great example is a project by Earl Scioneaux, a musician from New Orleans, who is offering prospective backers some home-cooked gumbo and music theory lessons. His rewards really connect us to his project and make us feel like patrons.

What are some of the projects currently being funded?
They cover all the bases: group of New Yorkers self-publishing a book where everyone gets a page, a photographer exploring Iceland, a writer funding travel for a regional cookbook, a NYTimes crossword puzzle creator funding the release of Brooklyn-themed puzzles.

The day after we launched, two projects were already completely funded. That really blew us away. Five projects have been funded in the first week. Five more are quite close. The smallest funded was $35, and another is already close to it's $3,000 goal. Several new projects are attempting to raise $10,000.

Who is likely to use the site?
I think projects will mostly be started by: people with particular ideas that have been burning in their hearts for awhile; those people that have ideas falling out of their heads; and people in creative industries that no longer want to wait to be tapped on the head. Then the second group are the audiences and networks of those folks. We think, eventually, that's almost everyone.

KickStarter was a back of a napkin idea, and everyone has those. What if you could easily aggregate enthusiasm with resources? What project would you like to kickstart?

Juliette Powell is an entrepreneur, digital media consultant and author of 33 Million People in the Room (Financial Times Press, 2009), a book about social networking for business. Powell is co-founder of the Gathering Think Tank Inc., an innovation forum at the intersection of media, business, advertising and technology. You can connect with her on Twitter and Facebook.