I think it is safe to say that everyone is fed up with political attack ads. What if there was a legal way to make them all go away, rendering the Citizen's United decision mute... er, moot?

We have the power to make it happen before 2016. We can neutralize the bazillionaires who bring their slime into our living rooms. There's an app for that. Or at least there will be, because it's too obvious and easy. Calling all geeks: start writing the code!

It is hard to argue that the obscene amount money spent on this year's elections didn't influence the outcome. Why else would tycoons, multinational corporations, and "social welfare" organizations like the NRA and NARAL finance political campaigns? If your candidate lost, then you probably agree that the election was bought, at least to some extent.

Maybe if you had just donated more money to your candidate or cause, he she or it would have prevailed. Maybe if enough of us little people got out our checkbooks, we could nullify the fat cats. That's exactly what the current system is designed to get you to believe. But it's a scam. There is a better way to fight back that will cost you nothing.

The first thing you need to understand is that a large sum of money, by itself, doesn't help a candidate all that much. A million dollars in a campaign fund seems like an incredible amount of dough, and it is. But if a Koch brother or a George Soros matches it and raises it by another couple million for the other guy, your guy will probably lose. With the overturning of campaign finance laws, there is really no limit to how much the wealthy can spend. They can buy elections, and they do. It's not the amount of money that counts. It's the difference in the amount of money.

The second thing to know is that when you make a political contribution, your candidate doesn't keep it. The campaign immediately spends it on advertising. When you donate your hard-earned money, you are actually giving it to broadcast corporations. Campaign funding has become an arms race and neither side wants to be outspent by the other. This year's midterm election is projected to break all records, costing nearly $4 billion (or raising nearly $4 billion in revenue for those on the profit side of the equation). Broadcasters get the lion's share of this easy money, which apparently goes straight into the pockets of executives and shareholders (I haven't noticed an improvement in programming in even-numbered years, have you?)

The third thing is that the media are not disinterested, fair, truthful or objective. The job of broadcast television is not to inform you, but to maximize its revenue by selling advertising and attracting viewers. The mantra of local TV news is, "If it bleeds, it leads." If the goal was to update you about what's happening in your city, there would be no teasers showing mayhem with scrolling "BREAKING NEWS" banners telling you to "WATCH AT ELEVEN" to find out what happened. If they wanted to inform you, they would just tell you. So your political contribution only fuels a corrupt system that is aided and abetted by the industry that benefits most, and has no incentive to be a honest broker.

Anybody who watches sports knows that part of the job description of sportscaster is to keep you from tuning out. Even when a game is a boring blowout, announcers keep telling you that the losing team is "still in the game" and that "it ain't over till it's over" (even if it was over by half time). If they could make the score closer they would. Fewer people would change the channel, and they would make more money from advertising. Imagine how much more money they could make if supporters of the teams were buying ads too. Especially if the game were rigged in such a way that the commercials improved the chances that their team would win!

Why would anyone think that political reporting is any different? Doesn't it seem like a conflict of interest that the very industry that is getting all the money is the same industry that is entrusted to report the facts? If they could do something to make the polls closer, would they? How tempting would it be to run just a few more negative stories about the frontrunner and positive stories about the underdog, just to tighten the race a bit to make it more newsworthy, and sell more ads? After all, what people see on TV influences the way they vote. The billionaires know that, and the companies who are getting their money to run attack ads know that too.

According to a story in the Fiscal Times last week:

National Republicans, feeling a spending pinch, recently pulled their advertising from the race for an open Senate seat in Michigan after polls showed that Democratic Rep. Gary Peters was almost certain to beat former secretary of state Terri Lynn Land, the GOP nominee. With some of those savings, Republicans then pumped $400,000 more into the race for another open seat in Iowa, where GOP state senator Joni Ernst holds a slight lead over Democratic Rep. Bruce Braley.

Does anybody think that Michigan broadcasters are happy about losing this revenue stream to their Iowa brethren?

So... what can we do to neutralize the slime?

When my daughter was little, I would let her watch TV only on the condition that she mute all the ads. She got really good at it, turning the sound off the instant the commercial started, and then restoring it as soon as the show came back on.

Virtually everyone who owns a TV also owns a smart phone. Smart phones can be used as TV remotes. They can also be used to connect to social media. Social media is a means of crowd sourcing. I think there would be a lot of like-minded people who would be willing to take their virtual turn with the mute button. Or maybe there's an even easier, fully automated way involving pattern recognition and learning algorithms. Do I really need to say more?

I know there are many gifted app programmers who care about the future of our democracy. I won't write the specifications for you, but I would also like to be able to adjust the settings. Can I pre-select something to appear on my screen during the ad? Also, can I have the option of a musical interlude until my show comes back on? 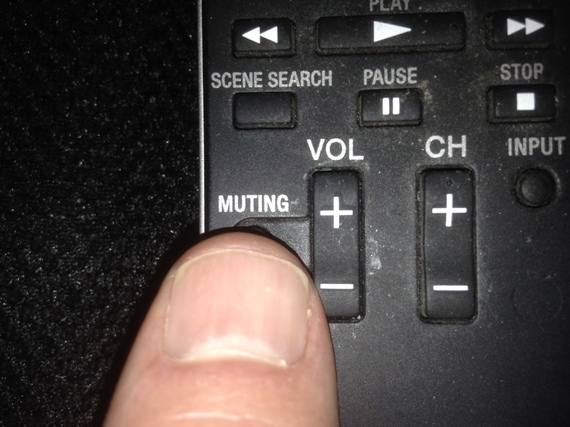