OK, stay calm! I want you to push the orange lever forward... slowly!

If the pilot of a 767 died, could you land it while the control tower talked you through it over the radio? This is akin to my longtime vision of hell -- having to teach my mother to edit a complicated film project in Final Cut Pro over the phone. Control freak? I admit I have something of an obsession with this idea of getting people to do complicated things, remotely, via instructions. And I invited the demon back -- as we always do -- when I made my new crowd-sourced film, Globe Trot.

I cajoled 54 filmmakers in 23 countries (representing all seven continents including Antarctica) to each contribute two seconds of precise footage that I edited together. Fifteen months of work, a three-minute film.

I've made 25 films in which I've done funny, I've done dramatic and conceptual and beautiful. In this film, I wanted to go for something I hadn't tried -- joyous. And I hoped to do that in a celebration of humanity.

The visual technique in Globe Trot has every adjacent edit aligned in position and continuity. This has the effect of creating equalization. When a new image takes the place of an old image, with the same continuity of action, it says, These things are equal. And I hope you find that that's the message of Globe Trot -- that people, all over the world, are equal.

My idea was to take a dance and assign four counts of it to filmmakers around the world. And I wanted them to shoot non-dancers so it would have a genuine quality -- a dance of the everyman. The hope was that seeing such a diversity of people all working to create something beautiful together would convey a sense of the unity of humanity.

Step One was to choreograph the dance and I enlisted Bebe Miller, my colleague at Ohio State University (where I'm a professor of dance-filmmaking).

Next: creating a manual to train the filmmakers. There was an absurd amount of instructions to cover and the challenge was to keep it as concise as possible to not lose the attention of volunteer filmmakers. I made training videos to accompany the manual. For the excessively curious, all this can be seen at MitchellRose.com.

And then there was the little detail of finding filmmakers around the world to participate. It took months of searching -- well, more accurately, groveling -- using social media and hitting up contacts from dance-film festivals. Eventually I found my people on all seven continents, including a guy at a research station in Antarctica.

Each filmmaker was sent their four-count phrase and a kit of materials, including a spreadsheet showing where the performer should be positioned. The frame was divided into ninths... 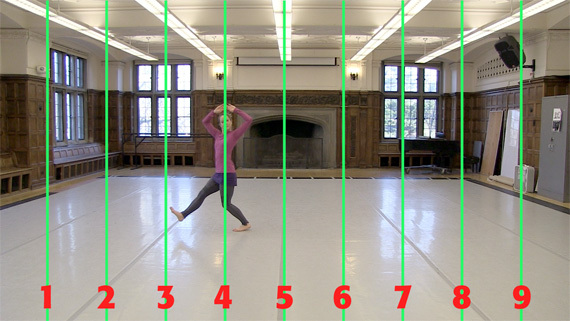 As meticulous as I'd tried to be in my training materials, most footage still ended up being off -- too close, wrong framing, misinterpreted choreography, etc. And so began The Summer of Emails, as I sent over a thousand emails offering critiques of footage and... talking them through it from the control tower. "I want you to push the orange lever forward... slowly!"

But all those trips to DropBox paid off as my mensches came through. I had enough to work with -- 561 video clips to be whittled into the 111 needed. Imperfect placement? Sure. But I could tweak them in editing.

As I started assembling it together, I remember showing a rough cut to the choreographer and her reaction was, "I love people!" That's exactly the response I want. And a response I hope is resonating as Globe Trot is shared about the planet.