"New York - Mitsubishi Motors is accelerating its drive toward greater environmental responsibility and reinforcing its Drive@Earth global sustainability initiative by announcing today its commitment to develop the pure electric, four-passenger Mitsubishi i MiEV for global markets.

"Electric vehicles are one branch of the automotive landscape and we are dedicated to providing these technology-sourced solutions as an important path for the world's clean-air options," explained Kurihara, who stood alongside a Left Hand Drive i MiEV during his address to journalists at the New York International Auto Show. "We believe the i MiEV delivers on the promise of sustainability, suitable range, performance, and innovative packaging and styling." 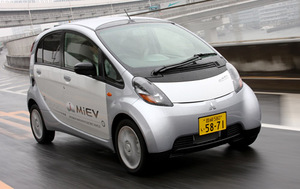 Mitsu's production i MiEV models will grow out of the company's EV concepts, long a part of their corporate R&D culture and commitment to future vehicles; Mitsubishi has lengthy and unique corporate experience in the automotive, airplane, aerospace and energy generation fields at all levels, from concept to R&D to production of technologies.

The award-winning Mitsubishi i MiEV is expected to be the world's first practical electric vehicle offered by a major automobile manufacturer when fleet sales begin this July in Japan.

Kurihara was pleased to also announce that the State of Oregon and Portland General Electric (PGE) (NYSE:POR) are joining Mitsubishi in the i MiEV partnership program. "State of Oregon Governor Ted Kulongoski is a progressive thinker who is providing a roadmap of the future," commented Kurihara. "The State of Oregon and Portland General Electric will become valuable partners in helping validate the future of all electric vehicles." (Blogger's note: Ron Tonkin, the #81 car dealer group in the US and based in Portland, recently signed-on with Fisker for exclusive rights to sell that company's sporty, luxurious and expensive extended-range gas/electric hybrids in Oregon).

Details of the programs are being finalized, but the findings from these real-world, independent tests will play an important role in further advancing the car's development for the U.S. market. 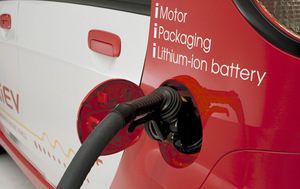 The company has remained dedicated to the i MiEV's "quick-charge socket" system to allow simple and fast recharging of the EV at home or away.

"Oregon welcomes the partnership with Mitsubishi as we transition to the next generation in vehicle technology. Together, we can build a consistent and reliable infrastructure so consumers can make the switch seamlessly to electric vehicles," Governor Kulongoski said. "The partnership shows that a state can create opportunity for its commitment to a greener future - wins for our economy and our environment."

PGE is rolling out a network of charging stations across its service territoryin Oregonand the addition of i MiEVs further facilitates its support of next-generation electric vehicles.PGE currently has more than a dozen charging stations up and running.

"We are developing a model charging station infrastructure across our service territory to advance the electric vehicle market in Oregon for our customers," said Jim Piro, president and CEO, PGE. "Our customers are number one in the nation in purchasing renewable power so clearly they are committed to sustainability. We expect Oregon to be one of the top markets for next generation electric vehicles. We look forward to partnering with Mitsubishi and the state of Oregon on this important project." 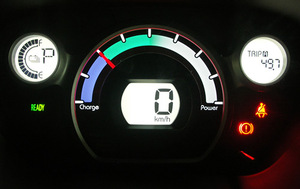 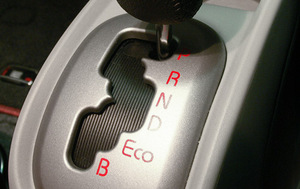 Can't find a much simpler dashboard information center or shifter than those in the i MiEV concepts.

Based on the successful Japanese market "i" car, the electric version replaces the i's conventional gasoline engine, transmission and fuel tank with an advanced lithium-ion battery system, electric motor and onboard charging system. Unique rear mid-ship architecture allowed Mitsubishi Motors to seamlessly integrate the new components under the seats, luggage compartment and floor deck, meaning no compromise in interior cabin space. In fact, there are few visual sight cues that indicate the vast technological differences between the gasoline and electric models.

With its high-torque electric motor and clever packaging, the i MiEV offers an intelligent combination of useful performance with small physical and carbon footprints, plus a roomy interior and a sensible range of approximately 80 miles from its advanced lithium-ion battery pack.

The i MiEV's battery pack consists of 22 modules, each one consisting of four cells that can be installed in either a vertical or transverse position under the i MiEV's floor. The i MiEV's onboard charger automatically adapts between a standard 110 outlet - which takes 12-14 hours - or half that time on 220. There is also a fast charge connector that allows the battery to reach 80 percent of capacity in just 30 minutes. 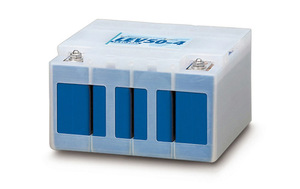 A single lithium ion battery pack module, one of 22 on-board an i MiEV; full recharging takes 12 to 14 hours using a standard 110-volt charge outlet, while a 220-volt line does the job in half that time, according to Mitsubishi.

The proprietary lithium-ion batteries are purpose-built for automotive applications. It is produced by Lithium Energy Japan, a joint venture among GS Yuasa, Mitsubishi Corporation and Mitsubishi Motors. 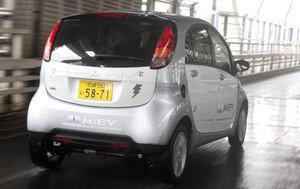 "Eat my dust - or my electrons - or whatever;" note no apparent exhaust pipes on the car.