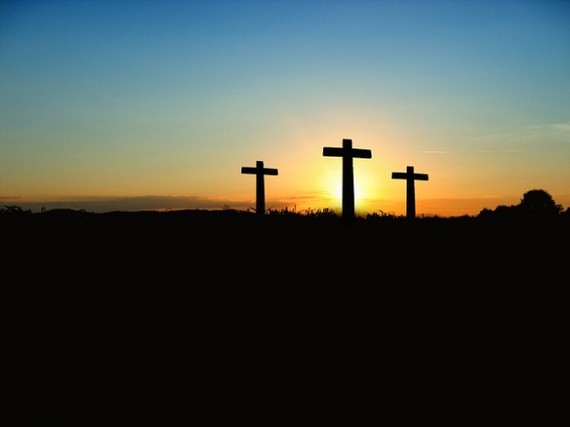 As Easter approaches, Christians turn their thoughts and spirits toward the crucifixion and resurrection of Jesus. Among the multiple meanings of Jesus' death, we remember him as a political scapegoat, sacrificed to preserve and maintain imperial order. His death evokes the ancient Israelite practice of scapegoating (Leviticus 16:8), where one sacrifice bears the sins of the whole community.

Jesus' message of solidarity with the poor, the lost and the heavy-laden did not sit well with the dominant temple society and their masters, the Roman Imperium. To the Empire, his death served to secure the stability and righteousness of the social order. Society likes to maintain the status quo. Leaders and rulers do not like to be challenged in the ways that things are organized and controlled, and make such sacrifices to insure peace. In our present society, built on racial injustice, white leaders and white communities do not like to be challenged by people who have been pushed to the margins and who cry out for justice, equality and liberation. Claims for racial justice threaten the status quo, and in response the dominant order seeks scapegoats to sacrifice.

We can see this at Trump rallies where Muslims and black people are told to leave the rally. They are not quietly led out. They are pushed, shoved, and tossed around as racial slurs are shouted at them. When a quiet silently protesting Muslim woman was told to leave one Trump rally, the crowd started yelling 'get out' and "you have a bomb, you have a bomb".

An African-American man was punched in the face as he was being ejected from a Trump rally. The police ended up detaining the assaulted victim rather than the white man who committed the assault. It was not until social media kept replaying the incident that the man who threw the punch was charged with assault and disorderly conduct.

Like these protestors, Jesus was a member of a marginalized people, blamed for some of the ills that were happening in Judea. This tragic logic of the scapegoat is repeated in marginalized communities today. Asian Americans join other people of color in the position of being scapegoated for the ills of society. We remember Vincent Chin, beaten to death in June 1982 by two white men who wanted to blame the Japanese for taking the car manufacturing jobs away from Americans.

Chin was Chinese American and not Japanese American but he became a scapegoat for the decline in the auto industry in Michigan. Vincent Chin was blamed for Japanese auto industry success. Two white men, Ronald Ebens and his stepson, Michael Nitz clubbed him with a baseball bat. Ebens, was convicted of violating Mr. Chin's civil rights and sentenced to 25 years in prison, but the conviction was overturned on appeal. They served no jail time, were given three years probation and fined $3000. It was a slap in the wrist for a hate crime against Chin and Asian Americans. Looking back, we remember Asian Americans who were prevented from entering the United States through the Chinese Exclusion Act of 1882. When the U.S. was at war with Germany, Japan and Italy during World War II only Japanese Americans suffered internment in significant numbers.

We see a variation the scapegoating of the Asian American police officer Peter Liang whose ricocheting bullet killed an unarmed black man, Akai Gurley, in a housing development in New York City in November 20, 2014. For too long, police officers have killed unarmed black men with impunity. No charges were made against the officers who killed Eric Garner, Michael Brown, Tamir Rice and too many others. While these officers have been immune to charges and consequences, it seems that Asian American officer Peter Liang bears no such immunity. Indeed the dominant power structure appears to lift up Liang's conviction to show the NYPD's willingness to prosecute its own. In this charade of justice, Liang's prosecution serves to establish the righteousness of the present system, possibly even deferring motion towards meaningful reform that might result in a more universal use of the system to hold police accountable.

This inconsistent application of justice that allows Peter Liang to be charged while other police officers do not face legal consequences for their actions stands in continuity with the other ways Asian Americans are scapegoated. Asian Americans get blamed for loss of college admission slots for white students, for jobs lost in the United States to Asian immigrants, and for jobs going to China and other Asian countries. All too often, Asian Americans are scapegoated in ways which pit us against other people of color. 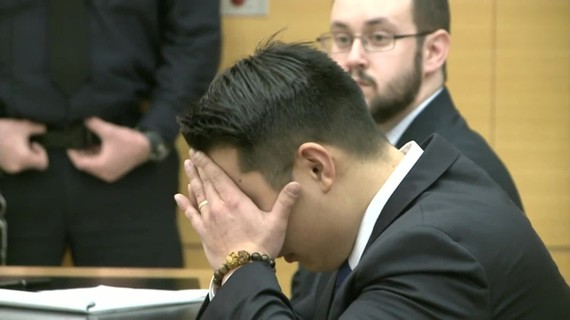 How many more times does an Asian American have to suffer racism, discrimination and hostility due to Asian ethnicity and be told that experiences of racism do not count as racism? How many times do we need to be told by white society that Asian Americans are 'model minorities' and 'honorific whites'? This form of scapegoating diminishes the long suffering of Asian Americans. These are tools used to reinforce white privilege and white supremacy.

This Easter season reminds us of the scapegoating of Jesus. It reminds us how he became the sacrificial lamb for the sins of society. Jesus challenged the Judean status quo, gave voice to the dispossessed, provided hope for the lost and a way to be reborn into a new life here on earth. The temple elite wanted nothing of it. They arrested him and had him tortured him and crucified.

The crowds blamed Jesus for their oppression and yelled out, "crucify him". Our society needs to think twice before we scapegoat and shout, "crucify him", against Peter Liang, other Asian Americans or any of our sisters and brothers.