Oil is cheap, but it could still be cheaper.

Everybody's talking about how oil prices have crashed from more than $100 a barrel to less than $50 a barrel in just a few months. This has been great for American drivers, pushing gasoline prices down to less than $2 a gallon around the country.

But some perspective is in order: $50 a barrel for oil is still kind of high, compared to what it has cost in the past, especially when you adjust for inflation. As The Washington Post's Steven Mufson pointed out, oil still costs a lot more than its average price from 1986 to 2004. During that stretch, imported oil cost $33 per barrel, on average, according to data from the federal Energy Information Administration.

This chart of inflation-adjusted oil prices might help put it in perspective: 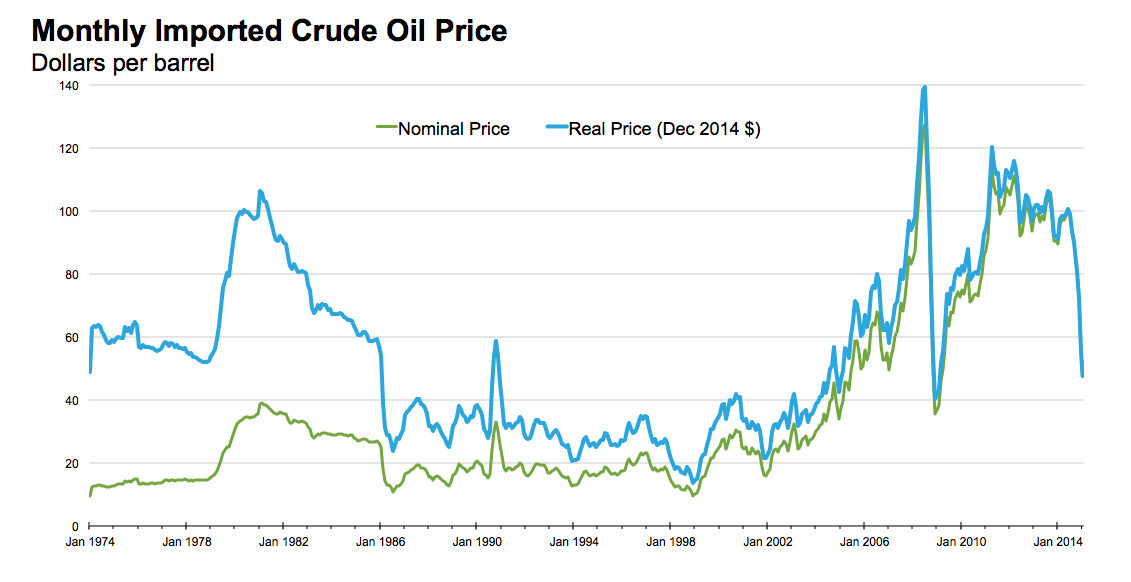 That chart is of EIA data on the price of imported crude oil, with a few market-based prices tacked on at the end to cover November through January, because the EIA data only go through October 2014. The blue line is adjusted for the consumer price index. The green line is the "nominal" price, or the price buyers saw in the market at the time.

As you can see, there have only been two times in the past 40 years when oil prices jumped to an inflation-adjusted $100 a barrel. The first was in the energy crisis of the 1970s. The second came right before the financial crisis of 2008. Prices crashed with the economy, but bounced almost all the way back and stayed pretty high for a while.

The cause of the most recent spike is still a bit of a mystery. A lot of it was driven by demand from emerging markets, but the full story is a little more complicated than that, as the Financial Times' Izabella Kaminska pointed out.

After the 1970s spike, oil got very cheap for a long time. Producers looking to cash in had pumped too much oil, causing a glut. Consumers and companies learned to chug less energy.

Though nobody seems to expect oil to get back to $33 a barrel, lower prices make sense: The latest oil-price spike inspired a boom in oil production in the U.S., which may have put too much oil in the market. And the long stretch of high prices has pushed consumers and companies to be more efficient again.