Back in 2008, I was running hot for the big "O." I even designed myself a nifty tee shirt that utilized Obama's famous "sunrise" logo in a tribal tattoo style, with a small "hope" inserted. I wore it with pride to the Denver Dem's Convention. I wore it when he won. And I've worn it in solidarity over the last two plus years every time Obama's been in trouble.

But the "hope" began to peel off a few weeks ago. Now it's gone, and the only thing left is a ratty white shadow. 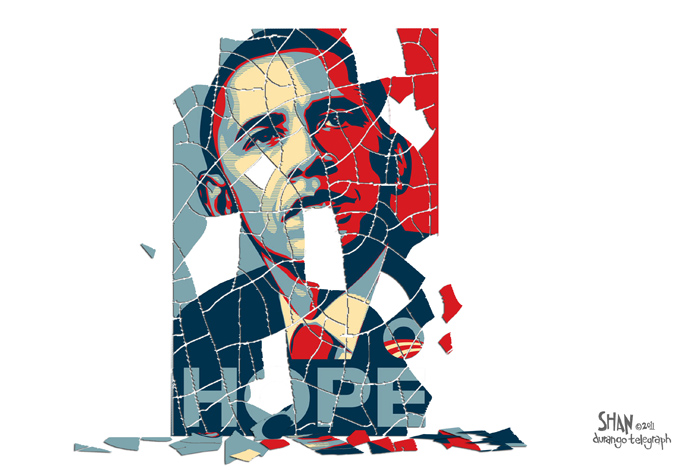 As someone who deals in metaphor for a living, I found the timing of my fraying shirt frightening. It's an odd synchronicity for my own lost respect for the man. I'll vote for him in 2012. I won't be happy about it. In fact, I'll be as actively worried as if there was a GOPer in the White House.

Obama looked utterly blank when asked by a reporter last December if he was worried about leverage the GOP had gained to use against him in the yet-to-come debt ceiling fight.

"What do you mean by, 'leverage'?" Obama asked.

That one sentence brought an end to my man-crush. Not only did Obama not understand that the GOP HAD rolled him, and was was GOING to roll him again... but he had no clue how. Nor did his advisors, who let him go out and say so in a brightly lit press conference. Oy.

I expected a strong pushback from the radical right when we elected our first black president. I expected them to go after him with both barrels, the kitchen sink, a slavering pit bull and broken bottles dipped in acid.

Apparently he didn't. Understandable after one rolling. Unforgivable after three. The guy's giving away the house that FDR built, and apparently he doesn't even know he's doing it.

One more cave, and he'll either lose next year, or draw a primary challenge, in which case he'll lose anyway. There's only one solution, Mr. President. You must actually fight, actually hold your ground, actually not capitulate, and actually be a Progressive leader.

In other words, wake the fuck up. Then maybe I'll paint a new "hope" on my poor shirt, and wear it with pride once more.