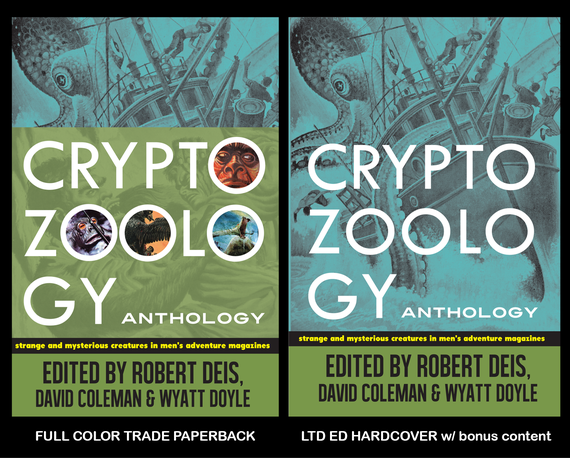 Robert Deis and Wyatt Doyle have recently published their third sterling collection of stories torn from the pages of the men's adventure magazines published in the 1950s, 1960s and 1970s. Following on the popularity of Weasels Ripped My Flesh! and He-Men, Bag Men & Nymphos, comes their Cryptozoology Anthology - Strange and Mysterious Creatures in Men's Adventure Magazines. In the Cryptozoology Anthology, Bigfoot guru David Colman added his expertise to the mix.

What follows is the second part of an extended interview regarding the latest collaboration... 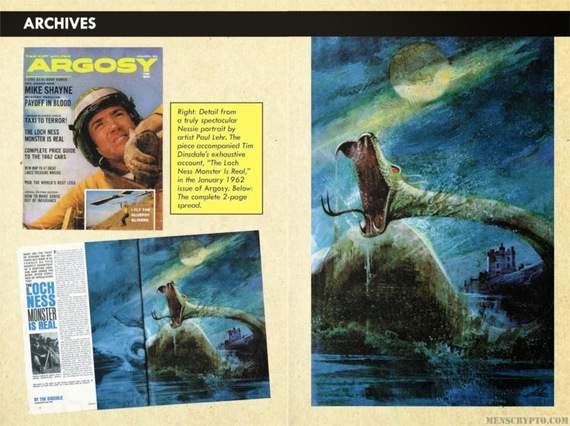 What did you learn about men's adventure magazines from creating the Cryptozoology Anthology you didn't know before?

Dave: That the cryptid stories were narratively evolving, no pun intended. The way Bigfoot, for example, is presented, as well as Yeti, is very flexible. And true to the arc of the culture from which they came, MAMs would have their cryptids, for example, become more licentious and the violence more outrageous.

I knew of course MAMs can be very transgressive by experience reading them as a delightfully shocked child reader back when. But as an adult, it was fun to see how the MAM editors were clearly alive to the cryptid fiction genre they were creating, and how they clearly added to the excitement in successive waves of stories and how their writers wrote them.

Bob: After our initial discussions with Dave, we realized that men's adventure magazines played a major role in the cultural awareness and perceptions of many cryptid monsters, especially Bigfoot, Sasquatch, the Yeti, the Loch Ness monster and the giant Thunderbird. But no previous books had ever really focused on that. So, we figured out that the Cryptozoology Anthology would also have historic significance in the realm of crypto lore.

Wyatt: When people think men's adventure magazine subjects, they think animal attacks, Nazi villains, war, tropical love slaves... The curious fact that Bigfoot and yeti stories and reportage were a lesser known part of that universe seemed reason enough to merit a collection. But the realization that the magazines were not merely exploiting that interest, but actually helping to establish and fan the flames of that interest in significant ways was a revelation. It altered our perspective on the whole project.

After producing a trio of anthologies ripped from the pages of the men's adventure magazines, what impresses you most about these stories?

Bob: I continue to be amazed that they are still relatively unknown and underappreciated. There is far greater awareness of the stories and artwork from the pre-World War II pulp magazines and of the science fiction and fantasy magazines that were published in the 1950s and 1960s, the decades that were the golden age for men's adventure magazines. The best stories and artwork in men's adventure magazines are as good as anything from those other genres and, I think, deserve wider attention. They also include many fact-based stories and photographs that provide glimpses of history, something the old pulps and sci fi mags do not provide. They're a huge a treasure trove of mid-Twentieth Century pop culture artifacts.

Wyatt: I still get a kick out of the fact that these magazines got no respect in their time, and even now, when even the most mediocre genre material is elevated to "classic" status simply because it's old, MAMs continue to evade respectability. Inexplicably! No one has ever suggested the beloved pulp magazines of the 1930s are high art, and they're collected feverishly. Comics' fans find something to appreciate - even love - in the most unlikely D-list titles from the 1950s. Even the most dire mid-century sex magazines are hip. Yet noses still turn up in some collector's circles at the mere mention of men's adventure mags. We've heard arguments they shouldn't even be considered pulp fiction! Men's adventure magazine fiction is the outcast in an outcast genre, the perennial underdog of pulp fiction.

What else would you have included in Cryptozoology Anthology if you had the room? What fantastic beasts are missing? Enough for another Cryptozoology themed anthology down in the future?

Bob: Well, there are literally scores of other stories about various types of cryptid creatures in men's adventure magazines. We only scratched the surface of what there is about Nessie and other sea and lake monsters. And there are plenty more about the manlike Hominid cryptids, too. Enough to fill several more volumes. In fact, we're already thinking about a second one.

Wyatt: I'm originally from Philadelphia, so I heard tales of the Jersey Devil around a lot of campfires growing up; it would have been nice to include him. He does make a cameo appearance in the John Keel story (Incredible Monster-Man Sightings in the U.S.), but we had no standalone piece focused solely on the Jersey Devil. But that doesn't mean it's not out there, somewhere. You wait, Bob will find one.

As fans of the men's adventure magazines do you feel an obligation to preserve this publishing niche or is it all for fun?

Bob: It's both for me. There's certainly a humor factor associated with many men's adventure magazine stories and artwork. Some of it comes from conscious nudge-nudge-wink-wink aspects that the editors, writers and artists put in knowingly. Some of it is because many of the stories and illustrations look so jaw-droppingly over-the-top or politically incorrect from today's perspective. But, yeah, a big part of the reason behind doing our www.MensPulpMags.com/ blog, the Men's Adventure Magazines Facebook group and the Men's Adventure Library series of anthologies is to increase awareness of a genre of magazines that was once read by tens of millions of men, and that was contributed to by many talented writers and artists; a genre that sheds a light on American history and culture that you can't get from reading history books.

Was the success of the men's adventure magazines due entirely to the marriage of outrageous art and hard action stories, or was there something deeper going on in society which kept these magazine flying off the shelves?

Bob: The men's adventure magazines took shape after World War II and were largely targeted to American servicemen, veterans and blue-collar workers who grew up reading classic comic books and pulp magazines. There were millions of them so it was a big market. I think men's adventure magazines filled a need for those men, after they became adults experienced the grim realities of World War II, the Korean War, the Vietnam War and the huge cultural changes that took place in the 1950s and 1960s. They wanted magazines that combined entertaining stories with news and exposés and other features done from and for the point of view of grown-up, regular guys, rather than for the upwardly mobile executive types and eggheads that Playboy and its clones targeted. Of course, all men like the photos of semi-nude and nude women that were common to both the men's adventure and girlie mag genres.

Wyatt: What still blows my mind is the readership the mags enjoyed. These crazy stories and wild images that today exist only on the very fringes of pop culture were once ubiquitous and mainstream, a regular part of a lot of working men's entertainment diet. We know reading fuels the brain in unique ways, helping to cultivate imagination and critical thinking. What does it mean when great swaths of the population move away, en masse, from reading as entertainment, replacing it with more passive, less engaging pursuits? It's hard not to feel that as a culture, we've lost something significant. 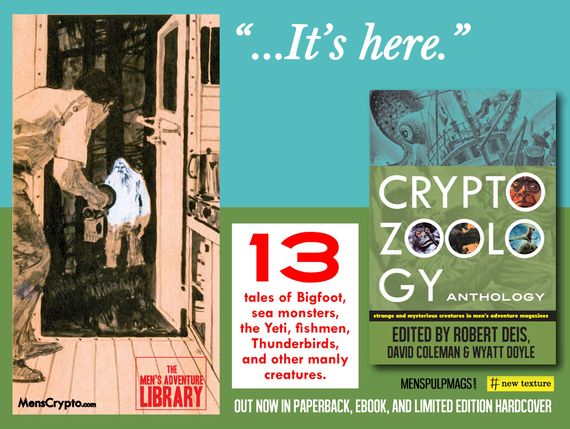 What do you think is behind the resurgences of interest in men's adventure magazines?

Bob: I'd say the growth of the Internet has a lot to do with it. The covers and interior artwork are so cool that examples get posted and reposted on thousands of websites. And art auction sites like Heritage Auctions have increasingly been offering original men's adventure magazine paintings for sale as part of a general increase in interest in twentieth century illustration art. Fans of the artwork eventually begin to realize that it comes from magazines they don't know much about, which leads them to websites like MensPulpMags.com and then to books that give them more information, like ours and the two seminal books that focus on the artwork, It's a Man's World and Men's Adventure Magazines in Postwar America. Both of those feature the collection of our friend Rich Oberg, the biggest collector of men's adventure artwork in the world. The other big factor is eBay. Basically, eBay has made it possible for anyone to buy old issues of men's adventure magazines that were pretty much hidden from sight in attics and used bookstores for a couple of decades and largely forgotten. As a result, there are more and more people actually collecting the magazines.

Wyatt: It's almost impossible not to be hooked by the fantastic covers and spectacular interior illustrations once you've seen them; that's the biggest group of fans, and that's always going to be the biggest group of fans. A smaller subset also enjoys the stories, and recognizes there's just as much to enjoy and marvel at and be thrilled by in the magazine's copy. A third group appreciates the art and stories, but is also intrigued by the idea that the magazines -- their stories, their artwork, their take on their world and their times -- provide unique perspectives on a whole lot of other things, some of which have little or nothing to do with great illustration art or high-octane fiction. Our ambition is to pack enough art, pulp, and insight into our releases to satisfy each of those tastes with the same book. So far I think we're doing all right.

Thanks gang for a great interview and for the coolness that is Cryptozoology Anthology...And I haven't forgotten I agreed to help out with an anthology of boxing stories from the Men's Adventure Magazines, which I'm greatly looking forward to working on.