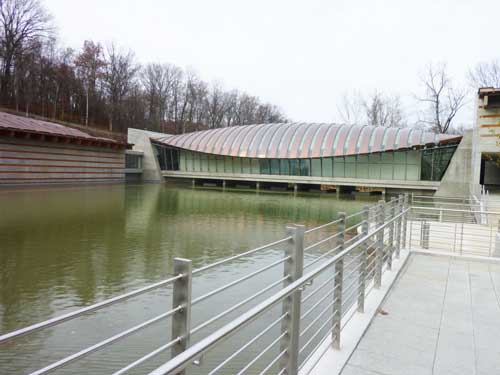 After more than six years of intense planning, construction and collection-building (supported by more than $1 billion in contributions from Wal-Mart heiress Alice Walton, members of her family, and the Walton Family Foundation), the gleaming copper-topped Crystal Bridges Museum of American Art in Bentonville, AR (Wal-Mart's headquarters city), has finally opened to a curious public.

Now that Alice's Palace is reality, it's time to move beyond past controversies about the nascent institution's sometimes dicey art-acquisition practices and evaluate both the accomplishments and shortcomings of this important new cultural oasis. Whatever one's views on Wal-Mart's corporate practices or on the destabilizing effect of Alice Walton's huge infusion of cash into the market for American art, there is no question that Crystal Bridges enriches a region that lacks anything like it.

Let's give credit where credit is due: Having conceived and bankrolled Crystal Bridges, Alice Walton chose not to make this project about herself. There's no photo of, let alone tribute to, the founder/donor -- a bit of self-aggrandizement that has come to be standard practice at other single-donor cultural enterprises.

Hoping to attract broad-based contributions (in both cash and art) to her project, Walton refrained from naming the museum for herself. Unlike other single-collector museums (think the financially driven relocation to Philadelphia of the Barnes Foundation and the demise of the poorly attended Terra Museum of American Art, Chicago), Alice's creation was endowed so munificently by its founder as to insure its financial longevity. In many ways, Crystal Bridges' benefactor, with the help of savvy advisers, did it right.

For the most part, I greatly admired what I saw during my two-day visit. That said, I sometimes felt that the architecture and the art were engaged in a not always friendly sparring match, in which the art was sometimes the loser.

Below is one view of the sometimes disjointed layout. (That's Dennis Miller Bunker's "Anne Page," 1887, at the far end.) 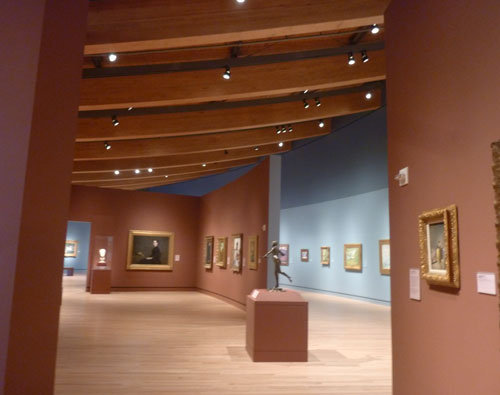 Whatever its faults, Alice's Palace is, overall, an arresting, rewarding creation. However it stacks up against the great public collections of American art, Crystal Bridges is undeniably a great boon for its art-starved region. The totality of its holdings is not "World Class," as some headline writers would have it. But as founding curator Chris Crosman described it to me during my visit, it is "a credible collection," with its fair (or sometimes unfair) share of masterpieces.

It does something else extremely well -- invite less well-known artists into the American-art narrative. These bit players, more often than not, hold their own against the superstars.

To get the lay of the land and the impact of the art, join me now on a two-part video tour of both the exterior and gallery spaces of the museum's Moshe Safdie-designed pavilions, which I visited just a few days after the public opening. Construction and installation were complete, except for the upper pond, which was still a work-in-progress: 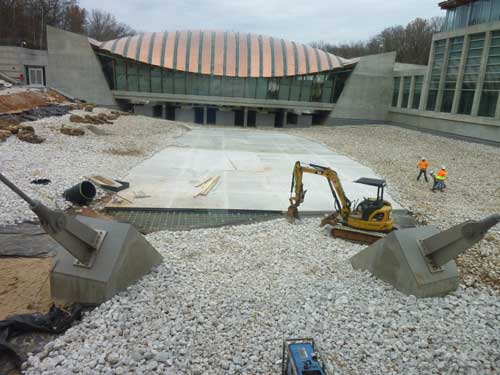 Below is Part I of my video tour, which includes my commentary on the exterior (and how it's weathering), as well as a look at the entrance lobby (which contains a surprising feature). We'll also walk through the first galleries of "Celebrating the American Spirit," the sprawling inaugural installation of the museum's permanent collection:

Here's Part II, in which we continue our tour of the galleries, examining the strengths, weaknesses and surprises of the collection and the architecture:

Photos and videos by Lee Rosenbaum