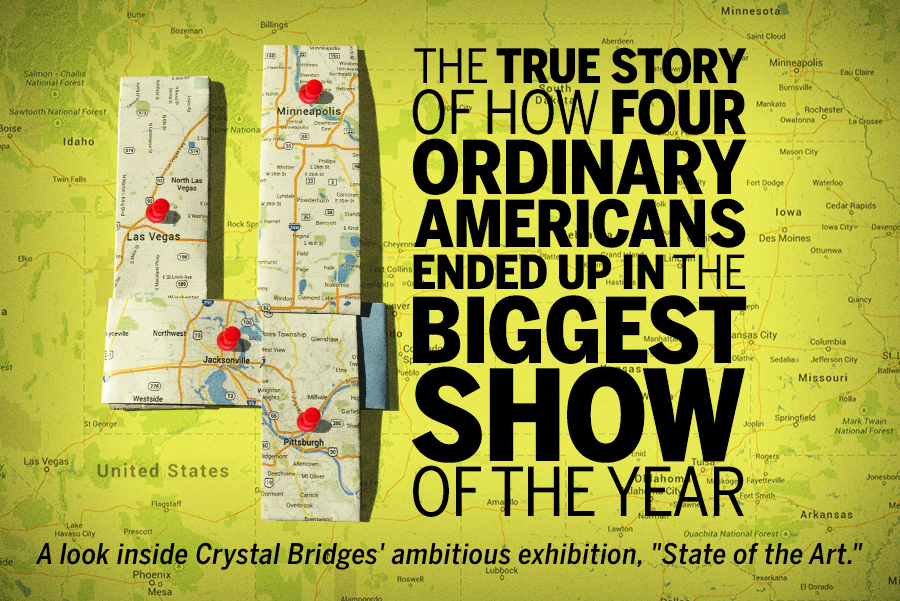 Recall the famous New Yorker cover “View of the World from 9th Avenue,” by Saul Steinberg. All of America is shown from the vantage point of western Manhattan. In the distance lies the country’s West coast and not much else. New York City, naturally, is dead center.

This is the cartographic delusion that rules the art world. At this year’s Whitney Biennial — a powerful commercial launching pad for young artists, in much the same way “Saturday Night Live” is for comedians — more than 70 of the 100 or so chosen painters, sculptors, videographers and the like worked either in California or New York.

The following artists all hail from a different corner of America. None of them had been exhibited outside of their region before the Crystal Bridges show. 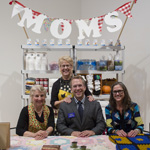 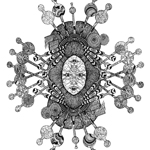 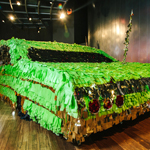 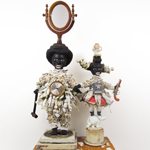 This “Steinbergian view of the country” is anathema to Don Bacigalupi, president of Crystal Bridges, the ambitious museum of American art in tiny Bentonville, Arkansas, founded in 2011 by Walmart heiress Alice Walton. Speaking from his vast, glass-walled place of employment, Bacigalupi discussed the museum’s new counterpoint to the Steinbergian worldview, an exhibit instantly coined “the anti-Whitney Biennial” by the press upon its opening last month. The elevator pitch for State of the Art: one hundred works, no big names and an insane road trip.

They didn’t know how to comport themselves. Many were shocked and curious as to why we’d traveled across the country.

In concert, the three elements make the exhibit nothing short of historic. For 10 months, Bacigalupi and curator Chad Alligood crisscrossed the country, dropping into the studios of 960 artists. The studio visit is a mythologized rite of passage — portrayed in movies as the moment an artist’s fortune changes — and most of Bacigalupi’s and Alligood’s hosts had never experienced one. “They didn’t know how to comport themselves,” Bacigalupi told The Huffington Post a few days after the opening of the exhibit. “Many were shocked and curious as to why we’d traveled across the country.”

With good reason. “This is not the way exhibitions of contemporary art are curated,” Alligood admitted, citing “a bit of fear” in the curatorial community and in museum leadership. The risks lie not only in the process (just try explaining a year of slow emails with “We’re not going to be in the office, because we’ll be in Idaho or Omaha,” as Alligood put it), but in shirking the typical approach to museum fundraising, where a star artist or piece is used to entice sponsors. Instead, Alligood said, “I had to say ‘Trust us.’” 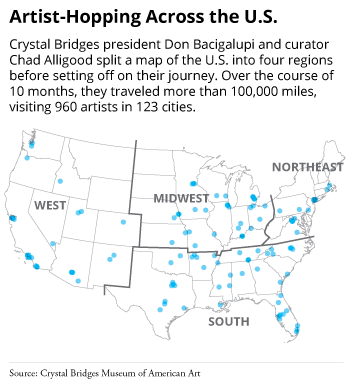 Crystal Bridges, designed by the renowned architect Moshe Safdie, differs fundamentally from other museums of its size in that it is privately owned. Funded by Walton, it operates in service of her stated goal to transform a region. And indeed, Bentonville — a city nestled in the Ozarks, an area known primarily for its natural beauty — has changed around the museum. Where once the big attraction was the Walmart Museum, featuring a five-and-dime styled after Sam Walton’s original store, the downtown now brims with pint-size galleries, posh restaurants and an outpost of the boutique art-themed hotel chain 21c. A representative for the city’s chamber of commerce said that hotel and restaurant tax collection has increased by more than 12 percent each year since Crystal Bridges opened its doors.

The tourists aren’t your average art fiends. More than 1 million people have visited Crystal Bridges so far, and according to museum records, a good number of them have been real first-timers — meaning they've never stepped into a museum before in their lives. This statistic informed Bacigalupi’s vision for State of the Art, which he sees as a chance to do justice to contemporary art, a field he believes is unfairly maligned. “If we think about the stereotypes that attend it,” he said, “that it’s difficult to understand, that it’s something a child could do, that it may not have anything to say to us as a society — we wanted to counter all of those notions.”

He also expanded an idea he’d floated to Alice Walton while interviewing for his current post. At the time, Bacigalupi was director of the Toledo Museum in Ohio, the epicenter of “a very lively and very deeply rooted art scene,” he said. “I thought with this new museum, there might be an opportunity to focus the lens around practice happening in all parts of the country.”

The curators discuss how the artists interpret their cultural heritage in their work.

Walton is seen as something of a hawk in the art world — keen-eyed and dangerous, with a tendency to buy from insolvent institutions with beloved collections. She’s a natural disruptor, according to Alligood. Where some founders might have bristled at a long road trip toward a dream, Walton welcomed the plan. Omnipotence helps. “At other institutions, you have to convince a lot more people to make the gears turn,” Alligood noted.

From the start, the exhibit demanded a new process. Bacigalupi and Alligood canvassed hundreds of art professionals embedded in local scenes for names. From a total of 10,000 promising artists they chiseled a short list of 1,000. These they partitioned into four regions: Northeast, Northwest, South and West. Every week for nearly a year, the two men flew to a hub in one of these regions, rented a car and got going. Often, they visited a dozen or more studios in a day, capturing video and audio footage of the artist at each stop. They drove into dodgy city neighborhoods and one-road towns where the GPS didn’t work. No two studio spaces were alike, from front porches to basements to an overgrown bay in an abandoned Coca-Cola factory. The oldest artist they visited was in her eighties, the youngest a 10-year-old boy whose mother was on the list. (When he heard who was coming, he left his work out where the men couldn’t miss it, before leaving for school.) Another artist died a few weeks after the visit. 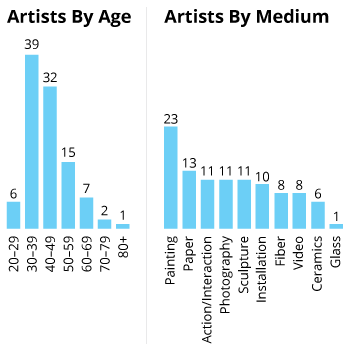 After each stop, the men composed a code they could later use to remember the work they saw, a process Bacigalupi likens in the exhibit catalogue to writing a haiku. The phrases, each three words long, describe the essentials of an artist’s work. (The catalogue lists some tantalizing ones — for example, “psychotropic video travelogues.”) The duo also scored the artists, Olympics-style, on a 10-point scale measuring qualities chosen with the audience in mind: virtuosity, engagement and appeal.

Bacigalupi considers this travelogue as vital as the exhibit, calling it “a database for the future about research at this moment in American practice.”

HuffPost’s look into State of the Art interweaves some of this data with our own profiles of four artists, none of whose work had been shown outside their geographical region before Crystal Bridges swooped in. Justin Favela, a Las Vegas artist, mines his Chicano heritage, as well as the high-low culture of Sin City, to produce outsized piñatas that wouldn’t look out of place in a photo shoot by David LaChapelle. In Florida, Hiromi Moneyhun uses only an X-Acto knife and memories of the paper-cut illustrations she loved as a girl in Japan to turn out large, mind-bendingly intricate structures. Twin Cities artist Andy DuCett turns the old trope of “Minnesota nice” into performance art, with a cast of actual moms. And Vanessa L. German makes "power figures" from trash for the children in the depressed Homewood neighborhood of Pittsburgh, where she lives.

The concerns of these artists are at once regional and global. Together, they form what Bacigalupi calls “a truer image of the country.” Even Saul Steinberg might agree: It’s a fine view.

To explore all of the 102 works in State of the Art, visit the exhibit website or download the museum’s dedicated app, available for Apple or Android devices.