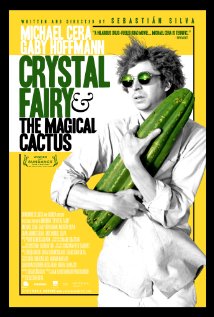 The search for Nirvana had not lost its virginity when it first started to appear in films and novels in the in the 50's and 60's. Enlightenment was the Holy Grail, which would be attained through, marijuana, mescaline and LSD. Easy Rider and On the Road are the eponymous examples which left an indelible mark on the genre. Sebastian Silva's Crystal Fairy &The Magical Cactus and 2012 actually is dated or postdated, as it were, for a reason. Now the spiritual search has not only lost its virginity. It's an aging whore. Jamie (Michael Cera) is an American in Chile who suffers from a kind of OCD regarding hallucinatory experience itself. Though he doesn't realize it, he's a burgeoning addict. Silva's brilliance lies in not reducing the malady to the usual hand wringing. Through Silva's lens we see Jamie as a compulsive seeker for the drug that will free him from being what he is. He meets up with another American, Crystal Fairy (Gaby Hoffmann). On the surface, she's a later day love child (nicknamed Crystal Hairy because of her unshaved armpits and pubic hair) who regards sugar as a toxin, but sees nothing wrong with drugs. But she too isn't easily reduced. As a teenager she'd been raped and while the tension between her and Jamie always revolves around her quest for meaning and beauty in the face of his drive to simply get high, she turns out to be a dominatrix who assaults her slaves with a strap-on. One scene at the beginning of the film tells the whole story and it alludes back to an iconic scene in another drug soused film, Trainspotting. Jamie's at a party and takes a monster dump that doesn't flush. In Trainspotting the drugs disappear down the toilet. So here's drug taking circa 2012--pure shit. The actual drug that the characters in the movie seek derives from cooking a cactus found in Northern Chile, but it's almost an afterthought. Jamie and Crystal (whose real name turns out to be Isabelle) learn something, but you wonder if it's because of the drugs or the interpersonal ordeal, that takes place in the process of trying to acquire them.

{This was originally posted to The Screaming Pope, Francis Levy's blog of rants and reactions to contemporary politics, art and culture)