The trains collided just before 8 a.m. when one eastbound train hit another westbound train stopped at the Harlem station on the same track, according to Fox Chicago.

The eastbound train was a runaway, with no one aboard, that somehow departed a nearby rail yard, overriding a trip mechanism intended to prevent trains from moving without an operator aboard, ABC Chicago reports.

According to the AP, video from the scene has reportedly confirmed that no one was manning the runaway train. The video has been reportedly turned over to the National Transportation Safety Board for its investigation.

Calderone told NBC the scene of the collision is now being treated "as a crime scene ... until it's ruled otherwise" due to the bizarre circumstances of the incident.

(Read below for photos from the scene.)

The Chicago Sun-Times reports the CTA first said at least 11 people were injured in the crash and they later revised that number to 33 injured.

CTA officials previously told the Chicago Tribune none of the injuries were life-threatening, according to the agency.

This shot was posted to Instagram shortly after the collision:

Passenger Lyneisha Fields, 18, told the AP she was stopped at the Harlem stop on the train when "we hear like a big boom sound and everyone started flying out of their seats."

Blue Line service was temporarily suspended between the Forest Park and Austin Avenue stops and shuttle buses were dispatched, according to NBC Chicago, but service has resumed to Forest Park as of 10 a.m. Trains are still not stopping at the Harlem station and the Harlem exits off the Eisenhower Expressway were also temporarily closed off. Service of trains heading into the Loop was not impacted.

The CTA has set up an alert they will update with continuing information about Blue Line service Monday.

The cause of the crash is currently under investigation. 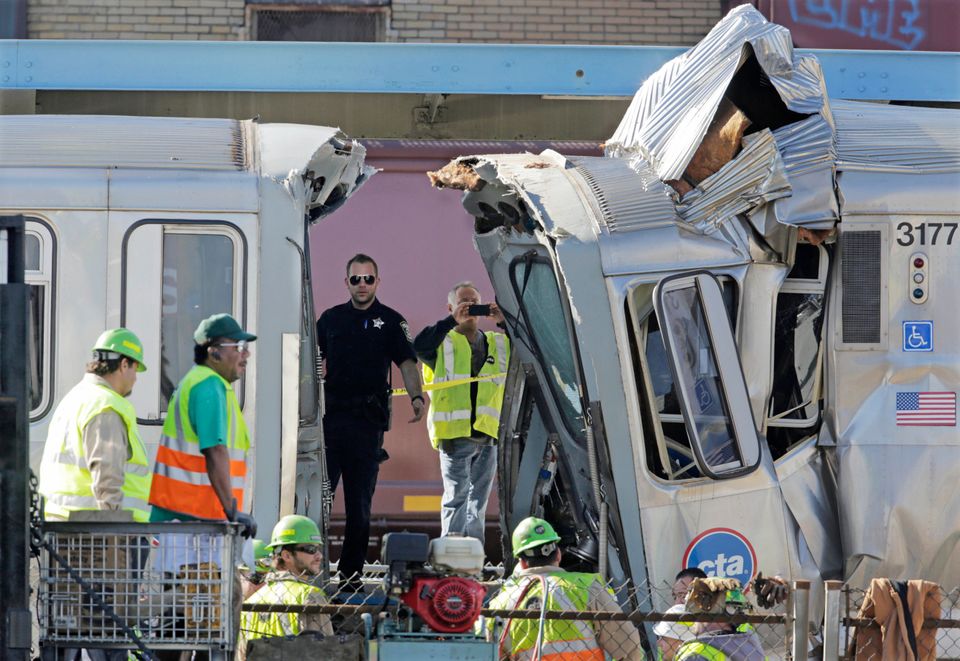 1 / 6
Authorities inspect the wreckage of two Chicago Transit Authority trains that crashed Monday, Sept. 30, 2013, in Forest Park, Ill. The crash happened when a westbound train stopped at the CTA Blue Line Harlem station, and was struck by an eastbound train on the same track. The CTA is investigating the cause of the crash, including why the trains were on the same track. A CTA official said 33 people suffered non-life threatening injuries. (AP Photo/M. Spencer Green)
AP