AMC premiered its newest series, Halt and Catch Fire, three weeks ago tonight, in the void that was left by the season finale of the jewel in the AMC crown, Mad Men. HCF (the title refers to a fictional DOS command that renders computers completely helpless and makes them eat themselves alive) is a period drama set in 1983 about the nascent birth of the computer culture which now pervades our every waking moment. The three leads - Lee Pace's ex-IBM cutthroat visionary Joe MacMillan, Scoot McNairy's beaten down, brilliant but lost computer genius Gordon Clark, and riotgrrl wunderkind programmer Cameron Howe played by Mackenzie Davis - could very well be the parents of the start-up team on Mike Judge's brilliant HBO dramedy Silicon Valley.

AMC began the process of reinventing the channel into a series-driven powerhouse twelve years ago after starting life branding themselves as "American Movie Classics" in 1984. In 2007 they took on Mad Men which, amazingly, had already been turned down by several cable channels before coming to AMC. Now of course, similar to The Sopranos (for which Mad Men creator Matthew Weiner had been a staff writer) it is so successful that it has become the beacon for smart, original programming. AMC followed up this acquisition by taking on the outstanding Breaking Bad, The Killing, The Walking Dead (among others), and my personal favorite, the short-lived but uncommonly engrossing series Rubicon. I will admit I'm still not over Rubicon's cancellation.

HCF has not garnered the reviews and coverage that it deserves and I'm a little concerned that it will go the way of Rubicon unless people understand how well-written and acted it is. Besides the aforementioned leads, strong supporting characters like Kerry Bishé (Gordon's loyal, conflicted wife Donna) and Toby Huss (who plays John Bosworth, the rapacious Senior VP of Sales at Cardiff Electric which is where the heart of the action takes place) mix it up splendidly. Add to this Grammy and Emmy-nominated composer Paul Haslinger, who embeds the action with a splendid synth-laded Eighties-ish (think Gary Numan, OMD, Soft Cell) score. The music supervisor, Thomas Golubic, also deserves colossal kudos for his artful use of music in each episode (XTC's Complicated Game underlying a scene in Episode 1 deserves its own shout-out).

A quick sum-up: Joe MacMillan sets up the series with Episode 1, Scene 1: his callous, overcaffeinated disregard for running over an armadillo in his Ferrari on the way to a lecture he is giving to a roomful of computer programmers. This is where he meets Girl Prodigy Cameron Howe, who swans into the lecture hall late and clearly not giving a damn, with her Walkman plugged into her ears. They are unmistakably two birds of a feather and, before the opening credits have even rolled, they're having brazen, debauched sex in the stockroom of a bar. Joe, of course, ruins the mood by misogynistically declaring, while they're in the throes of afterglow, "This doesn't mean you get the job." 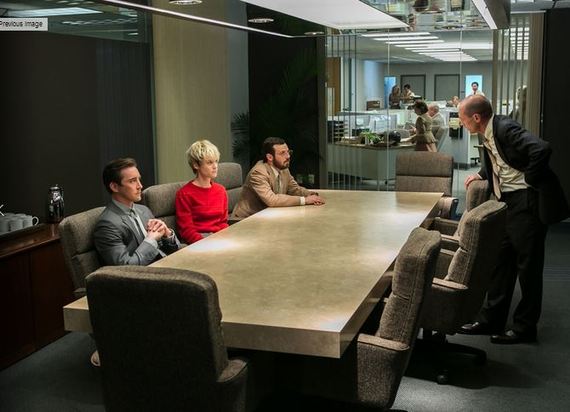 So it turns out that Joe has planned the entire story trajectory after his ignoble and murky career at IBM ended in a way we are not yet privy to. He sought out Gordon Clark at Cardiff Electric, a computer company located in Dallas, impressed by a perspicacious piece Clark wrote for Byte Magazine. Joe talks his way into a job at Cardiff by wowing Bosworth with his W-2 statement from IBM. He convinces Clark to reverse-engineer an IBM computer so that they can create their own PC model and go up against Big Blue - this being the pre-Apple coup d'etat back when IBM was the Alpha and Omega of the Computer Revolution. Cardiff nearly gets sued by armies of IBM lawyers. MacMillan plays everyone, including his old boss at IBM, and gets what he wants - a team that he can work with to overturn IBM's death grip on the market. He convinces Bosworth to hire Howe as the code breaker who can re-write the IBM Bios which is the first step of creating a new PC clone to challenge IBM's market share - and make it smaller and faster and portable. In other words, the ultimate game changer.

Recognizing that Clark and Howe are the only two who can execute his vision - and that they both see beyond the mainframe to a global future where computers are daisychained to the internet - MacMillan sagely advises Clark: "Computers aren't the thing. They're the thing that gets us to the thing." The hallmark of AMC's greatest series has always been deep character development alongside a great storyline and snappy, crisp dialogue. The fact that Halt and Catch Fire hasn't yet gained the audience it deserves should not hold anyone back from delving into it tonight and every Sunday night at 10pm on AMC.

Catch up on the first two full episodes here.