Fifty-seven years ago, in the city of Havana, Fidel Castro triumphantly declared, the victory of the Cuban revolution. The brutal and corrupt Fulgencio Bautista, the Jefe who presided over the best and the worst of Cuban government and life in the 20th century, was finally overthrown on January 1, 1959. In 1961, the U.S. declared a full trade embargo, which has endured to this day. The U.S. had backed Bautista's government.

The Cuban revolution is rich in history and you can read all about it in tour books, such as Lonely Planet. But today is today, and as I write this blog, the President of the United States, Barack Obama, is a making a ceremonial visit to Havana. He will give a speech about U.S. confidence in the future of Cuba, and extend hope to the Cuban people that they can look forward to a prosperous future.

After 57 years, the government of Cuba is still declaring the revolution. Parks, statues, monuments, signs, museums, dedicated buildings, fortresses and hundreds of photos and pictorial history lessons bear witness to the revolution and its leaders. But for Cubans, the passage of time reflects difficult and desperate decades that have produced scars of frustration and disappointment for promises that were not fulfilled. Filled with so much pain and sacrifice, Cubans are no longer interested in the symbols of revolution. They are focused on a promising future. 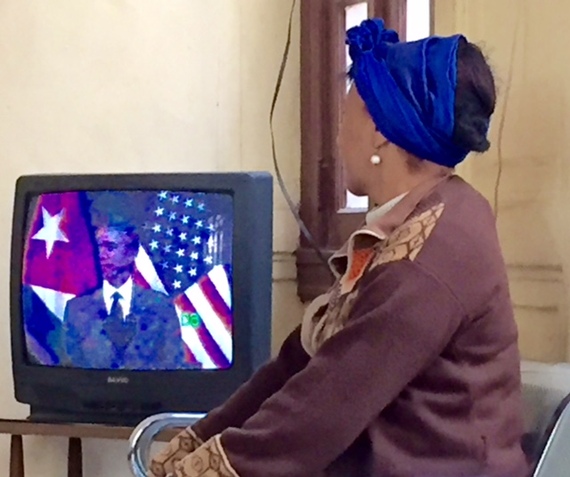 There is another story to be told about Cuba, and I set out to find that story in my two weeks of travel. I wasn't looking for a history lesson; I was 16 when Fidel marched into Havana and aware of what the new Communist regime. Now, I was looking to observe and discover what the Cuban people were thinking, feeling, and hoping to expect after 57 years.

Cuba is holding up a mirror to itself,

said a former college English teacher who quit teaching a year ago because his $20/month salary wasn't sufficient to live on let alone get married and have children. It's the same with his brother, an electrical engineer and his sister, a nurse. They all are professionals with none of the signs of outward success. They feel cheated.

What do the Cuban people see when they look into the mirror? The smart Cubans, like the medical doctor I met whose $50/month salary was insufficient to support his family, chose to put his professional training aside to make a better living off the tourist industry. Like-minded Cubans are determined to make choices to better their lives. They are saying no to a government who doesn't compensate or value their contribution to Cuba society.

At 72, I consider myself too old to be a backpacker, but facts dictate that I am still a spirited tourist. And since my traveling companion is 70 (much younger) and shows no signs of giving up his former life as a world adventurer, traveling by bus was the only way to see Cuba. And seeing the breadth of Cuba meant taking a good look at Cuba before the embargo lifts.

Roger that: Bus transport and Airbnb stays went swimmingly. People, places and chance encounters with other tourists (whose mantra was also: let's get to Cuba before the second American invasion) were transformative. We began with 2 days in Havana, 1 day in Cienfuegos, 2 days in Trinidad, 2 days in Camaguey, 3 days in Santiago, 2 days in Santa Clara, and back to Havana for another 2 days. Obama was virtually present everywhere in Cuba.

The following is true: The Cuban people are open and honest. They feel abandoned from time to time, but even though they don't wallow in self-pity, they don't smile much in the streets, on buses, or in taxis. Waitresses are hostile and rude except in the large and beautiful hotels. Customer service is the last thing a waitress is thinking about when she asks a customer what she wants to eat. She is thinking about the 10-cent tip a tourist will leave; or worse, no tip from the Cubans. Men don't bother with courtesy or manners: if they are passing a woman on the narrow sidewalk, they expect she'll step off into the street to let him pass. Everyone is angry.

But if I got tired of the decades of faded paint peeling off outside facades, crooked structures held up by old wooden scaffolding that would crumble if you blew on them, small interiors that look like doll houses, cracked and insufficient flooring, and too few towels to mop the floors clean, I would be a little angry, too. As a 10 year veteran of traveling, living and working in Cuba said to me:

Having a Home Depot wouldn't be so bad. 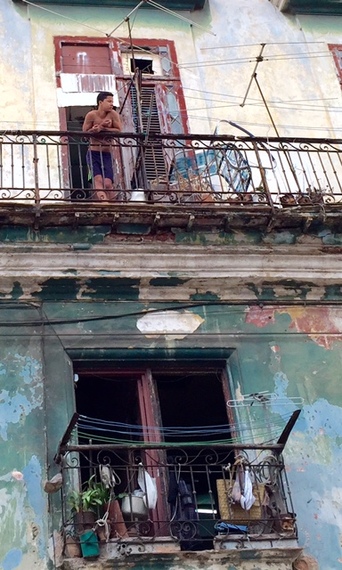 Adding insult to the infrastructure decay, Cubans rarely if at all eat beef. The luscious tropical countryside is full is cows from one end to another, but Cubans don't have access to beef. Beef is only for tourists. Beef is an added ingredient to a Cuban culinary revolution that only tourists will experience while the Cuban diet is limited to rice, beans, bread, and ham.

Yet, pride of possession kicks in every day: houses are clean despite being cracked and rotted. Cuban women give attention to the details of the plastic flowers, the display of linens no matter how old, and how particular arrangements of family photos can bring meaning to their homes. Chipped dishes and frayed clothing will not get them down.

Families make Cuban people happy. Outings in the park are joyful, full of laughter and gossip. It's part of the national culture. Although their children are educated, the system is now disappointing to many Cubans. Free doesn't necessarily mean good. Medical services are also free even though Cubans have to be patient and wait for months sometimes to get the needed help. 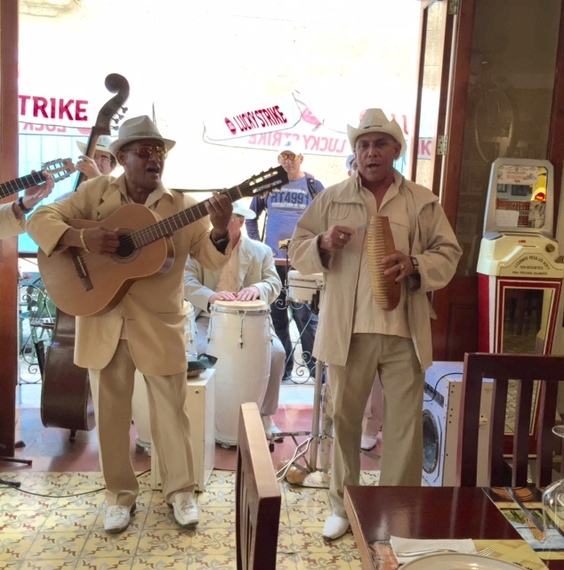 The other part of Cuba's culture is their music, and where there is music, there is dancing. Even though most Cubans don't go out, music fills the barrios with spontaneous combustion. As I walked up a hill on a hot day in Trinidad, following the sounds of musicians, I saw a woman dancing as she swept her small room. I joined her as we both danced to the Cuban son (native music). 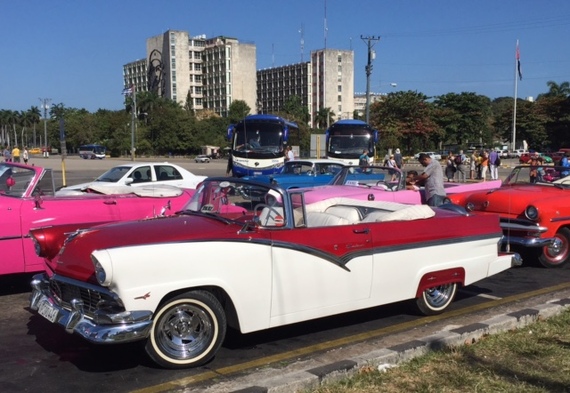 The only trappings of the past that are vital are the old Chevys, Oldsmobile's, Plymouths, Chryslers and Fords because they can transport people/tourists and be displayed along parkways indicating happier times, happier memories. Some alternative transports are also quaint: bici-taxis, horse and carriage, motorized contraptions and oxcarts. Others are leftover cars from when the Soviet Union economically supported Cuba - Ladas and Moskovichs still miraculously run.

However, the means of transportation don't matter much because driving in Cuban cities is a contact sport. There are no signs at junctions, highways or 1-way streets. The roads are full of ruts and potholes. It all defies logic. Just close your eyes and pray. Or take the Viazul bus service. That's the lesser of evils.

Cubans know that they are lacking in technical advances. The government doesn't allow the sale of smart phones and only a few have computers. I didn't find an Internet café in Havana, but I found one in Camaguey. Those who have phones gather at night in the park to get a Wi-Fi signal, but everyone has to buy a phone card from Etecsa, a government controlled agency that regulates cell phones, and therefore, Internet service.

The young folks I talked to know two things: Learn English and be patient. Jobs in the tourism will take up some of the salary slack and Internet service will be implemented. Other possibilities and opportunities will follow. Those four talented musicians I met in front of Restaurant 1800 in Camaguey might even get to perform on cruise ships one day soon.

How long do I have to wait?

I want to go to America.

he said. I nodded.

Government's resistance to letting the people seize opportunity is apparent to everyone. Most of the Cubans I talked to want to break out of where they are - to American first or to a decent job in Cuba second. They are tired of suffering a hangover from the days when the Soviet Union economically supported Cuba. And now they are completely dependent on Venezuelan oil.

But some, like a young man I met working in a tobacco factory in Santa Clara (who speaks fairly good English) want to stay in Cuba even though his sister lives in Miami and makes good money selling cemetery plots. Not everyone wants to leave, but those who stay expect more. 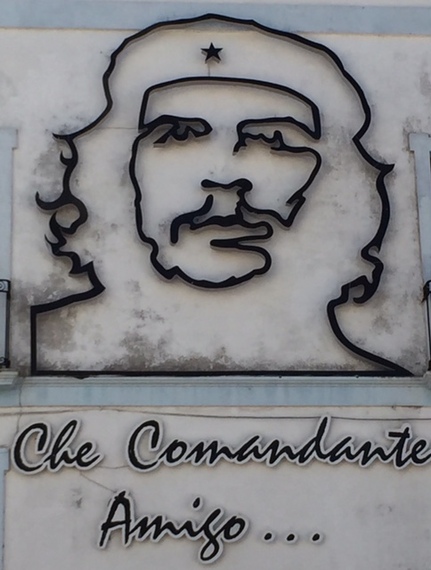 The iconography in Havana's Plaza de la Revolution and in Cuban cities no longer inspires the revolutionary spirit. No one talks politics or communism. Everyone talks about loosening the government's grip.

The revolution is over but you wouldn't know that from the party leaders and the ubiquitous propaganda signs calling out for dignity, confidence, security and a victorious, simple life - each according to his means. After promises are not kept, after the economy languished for decades, and after opportunities for personal and professional growth are resisted, all the monuments depicting the heroes of the revolution and all the tarnished displays of old weaponry ring hollow.

Cuba is a frontier, but it is also a lazy beautifully idiosyncratic country with a complex history that will eventually re-organize into its own unique society - a society built on equality, truth, and an entrepreneurial spirit. The signs are already there with Raul Castro's pledge to openness - a kind of "glasnost" that could be exciting. I hope it is real. And I also hope he thinks twice about putting dissidents in prison like he did while President Obama was flying in the air on his way to Havana. It's impossible to stop Cuba's march to freedom.

On my trip to Cuba, I saw incremental signs of change. Tonight I'm going to a gay bar to see a transvestite show in Santa Clara. All is possible in Cuba.