Despite federal policies in education, increased standardized testing of students and futile strategies to bring "competition" into the education marketplace, it is clear that there is a high correlation in the United States between the education achievement gap and poverty.

In 2002, my friend and colleague, Dr. Kate Moody, jumped at the chance to travel to Cuba by tagging along with fellow academics to a conference on economics (not her field). Kate is a literacy expert, recently named by the Center of Media Literacy as one of 20 pioneers in this discipline. Why was she so hot to go to Cuba? She had learned that this poor country, back when 80 percent of its population in rural areas, had long ago attained universal literacy and never looked back. Everyone reads! Sugar cane workers, farmers, all children read!

They also have very high achievement scores in math and science. She was intrigued and intensely curious. How did they do it? There was only one way to find out -- go to Cuba. Not a simple task for an American. It took years and jumping through a lot of bureaucratic hoops to get an OFAC license that has allowed her to make fourteen trips to study education on this embargoed island nation. I had lunch with her, the other day, and it was eye-opening. 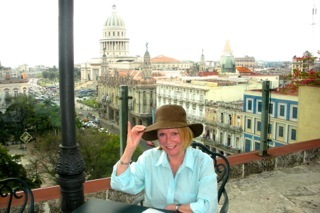 VC: What was the state of illiteracy in Cuba before this happened?

KM: According to a UNESCO report issued in 1965 (four years after Castro's Revolution), before the Revolution there were more than one million adult illiterates( 20% of the population), with 40% of the adult illiterates living in rural areas. The eradication of adult illiteracy was one of the first projects of Fidel Castro, but attention was also paid to schooling for children. Fifty percent of Cuban children did not attend school and there were only 17,000 schools when 35,000 were needed, particularly in the rural areas.

VC: How was this problem confronted by the Castro Government?

KM: Fidel Castro felt that education was one of the most important missions of his Revolution. His first major event was the Great Literacy Campaign of 1961. Castro went before the UN in 1960 and said, "We are going to eradicate illiteracy in Cuba and we will do it in only one year." There were skeptics galore, but they did it! They did it in one of the most organized literacy campaigns in history. Many countries have had literacy campaigns that show a little progress but then they die down. In this case, they used many assessments including having formerly illiterate people write a letter to Fidel Castro. Then the task became how do we get them from being basically literate to the next stage? They didn't just declare it a success and quit. They kept on going--for seventy years.

VC: How was such a campaign implemented?

KM: One of the key elements was something they called "mobilization." It meant organizing people so that they could get trained people to the right place at the right time. Educators designed the program. They recruited volunteers from the ranks of literate people, including teenagers, and trained them so that they could teach beginning reading. Initially they wanted the teacher/student ratio to be 1:2 but that was not practical so they settled for 1:4. Still a pretty effective ratio! The idea was that these young teachers would go into the homes of illiterate people and get them to agree to be taught through wooing, not coercion. The educators developed a curriculum for the campaign, which the volunteer teachers used while practicing good pedagogy for adults so that people wanted to learn. As people reported that they could now read, flags were raised in villages where everyone was literate. As these flags went up, so did national pride. Eventually they got everybody. Then they created follow-up programs so that people didn't quit but went to the next step to becoming more fluent. They created a newspaper for newly literate adults that would keep them interested.

VC: This was back in the '60s. What happened once the country was somewhat literate?

KM: The companion goal was to build a public school system. For that they needed to double the number of schools, build them in places where people could get to them, even build roads. It was all very carefully planned. They did this, built 17,000 schools, in less than a decade! "Do it for the Revolution" was very central to the culture, creating a lot of peer pressure to contribute. There has been sustained support for education in Cuba over the past 50 years. The Cuban government has been spending 11% of its national budget on education. Finland spends 6%. The US spends 2%. If this percentage is evidence of political will, Cuba's investment in education tops the chart. Teachers in Cuba are extremely highly regarded, as they are in Finland. And, as in Finland, all education is public. There are no private schools. The Cuban schools are good by many measures, not just achievement scores, which are high. Other values that are prized are what kind of person you are, your attitude, your cooperation working with others, how you treat foreign visitors. They consider themselves internationalists. They talk about emulation (cooperation) rather than competition. The place is awash in the arts. It's typical for kids to have arts, music and physical education every day. The curriculum shows an emphasis on science and math.

VC: What is your take-away from your knowledge of Cuban schools?

KM: It is enormously important that all school is free--from infant care, to daycare, to pre-school, through all the grades, the polytechnic institutes, university--even medical school. In Cuba, nobody steps back from school out of fear that the next level isn't affordable. Whereas we have approximately a 30% drop out rate from high school (in the richest nation on earth) Cubans' dropout rate is negligible. The class size is rigorously limited to 25 with a goal of only 15 at the junior high level. The healthcare system is carefully orchestrated with the school system with a doctor in every school, and implications for community mental health.

Beyond logistics, Cubans are very proud of their education system and teachers are well respected. I happened to be in Cuba last December 22 which is Teachers Day, a national holiday, in which teachers are honored and showered with gifts and attention. 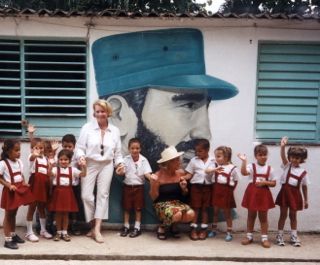 Needless to say, Kate Moody has a book in the works on this complex subject, which will be published by University Press of Florida in 2016. Yes, indeed, we have a lot to learn from Cuba.