Two weeks ago, my co-host Pat and I were invited to Cuba by Friendly Planet Travel, one of eight tour operators with a people-to-people license authorized to take Americans to this island country. Before I boarded the charter in Miami, many ideas were circling in my head about what to expect and what to look forward to. I wondered what kinds of things affected the everyday person in this former Communist, now Socialist government. I also wondered whether the influx of American tourists, since the Obama administration relaxed travel restrictions earlier in the year, have had any influence on the local government.

And so we arrived on the forbidden island. Along with our production crew, we began to film for our upcoming 2013 travel show. First stop, of course, Havana. Its history and architecture go way back to colonial times and it still reflects the diversity from each occupier -- the Spanish, French and Americans. While it is a beautiful city, my first impression was that it sorely needed a face-lift. While we were there, the Cuban government appeared to be making efforts to renovate the Old City of Havana, so there may be some good news for tourists that come after I'm long gone.

While we toured the capital, I couldn't escape the sense of national pride and devotion to the country's heroes -- with colorful murals and drawings of current and past leaders plastered everywhere. And of course I can't forget the other sense that was pleasantly stimulated -- the fabulous music which surrounded us everywhere we went.

Our Cuban guide was an educated young man who answered all of our questions -- no matter how pointed they were -- about his government, racism, and the economic state of Cuba. He talked with us about other infrastructure problems, for example, how the public transportation throughout the country is limited and that people often hitchhike because the majority of Cubans can't afford to buy a new car. He talked with us about how the country rations it's food and how everyone has equal access... basically every family gets a new ration book at the beginning of the year which allots them a certain amount of food per month from the "ration" store.

As I spent more time with our guide and of course many of the locals, I began to sense their deep-seeded hope and pride of their country. I also felt they shared a general sense "waiting"..."waiting" for something or someone to create "change." They displayed a genuine interest in what we, as Americans, thought of them. Many of the discussions with our guide, in particular, revolved around what it was to be an American. There were questions about our freedoms, or ability to choose what we wanted to do and how our racial groups interacted and worked together. It felt easy for me to answer, after all I am an American and proud of all the things we have accomplished -- despite our many differences. But our guide probed more. He was up-to-date with political mood in the U.S. and the divisive and, as he said, "ugly" words streaming out of our country for the entire world to see. This was puzzling to him. He prodded me to compare our freedoms with those of the average Cuban.

And that got me thinking... "where are we now as a people in this country?" What could I tell this young guy about our freedoms or hopes and our dreams? How were we different than others? And as we approach our country's birthday I thought about his questions and asked myself what would I say?

First, we are a politically messy country and have always been so. We are a country of immigrants -- racially, politically and spiritually. We fuss and fight and argue and love -- yes, love each other. But we are a country that allows for individualism. Your right to do "your thing" does not infringe on someone else's right. We have done great things as a country and people and we have done some pretty horrible things but, through it all, we have pulled together and uplifted many in our society.

As a country, we've gone through troublesome times and in the last decade, we can all attest that we have been affected by the economy, foreclosures, unemployment and the constant drumbeat of negative political rhetoric. And as we try and solve the current problems we face, I wonder if, as a nation, are we problem-solving or just at odds with each other about everything?

I remember the days when it was okay to disagree, and also to agree and respect "differences" and most importantly agree to "move on." I don't remember "back in the day" when our leaders shouted at one another, saying untrue things in an attempt to have their agenda be the "only" agenda for the country. Did I imagine that or did I block out "back in the day" memories? Or is it that I'm older and it just really bothers me now? What happened to the thinking leaders who realized the long-term value of compromise... and that "compromise" did not mean "loss." We used to revel in our uniqueness and were proud that we could come together even with differences -- for the better good of our people. Now, I wonder if we revel at all?

Something has dramatically changed in our country, and, as we approach another birthday, it seems simple, but I ask myself, "have we lost our identity?" Is the America that I know and the process we all enjoy, somehow darker, sullied and mean-spirited. It feels that lately our citizens are asked, and forced in many cases, to take sides. Has society accepted the culture of shouting down an opponent or yelling to become louder as the better scare tactic, i.e., the surrender is quicker and the victory complete. Has it become a vicious, and accepted, cycle -- this freedom of ours -- where there is little tolerance for differences whether you're talking politics or meeting at small town bbqs?

Where is my America? Those who say they are strict constitutionalists keep interpreting what this sacred document means "as seen in their eyes." Has the "reasonable man" approach fled?

And so I ask myself, and it may be a bold thing to ask, but how is our way any different than what is happening in Cuba? Cubans have restrictions placed on them for speaking out, restrictions placed on them for creating their own businesses, for disagreeing with officials and much more. Cubans living in and outside of the forbidden island know all too well the consequences of not following the government's line. But, in America, we don't have those kinds of controls placed on us. We, as citizens, have forgotten to think for ourselves. We have forgotten to read and investigate claims. We have forgotten to challenge ideas that are floated or yelled at us. Or, have we just gotten lazy and taken things for granted.

I think I would say to my Cuban friend that yes, we appear to be losing some of our unity in our country but, just like in our past, I am sure there are reasonable men with reasonable ideas who won't let us, their people, fall into despair. America and its people even with all of our differences will and can continue this experiment of democracy. After all, we are one in many and the stakes are too high.

We live in a precious environment -- let's not forget that. Let freedom ring and let us be thankful and work together to preserve the many facets that it stands for.

Happy Birthday America... and I wish you many more!

Proudly waiving the American flag on this 4th of July!

PHOTO GALLERY
Reminded of our Freedoms

Thankful for My Freedoms -- Happy Birthday America
Reminded of our Freedoms 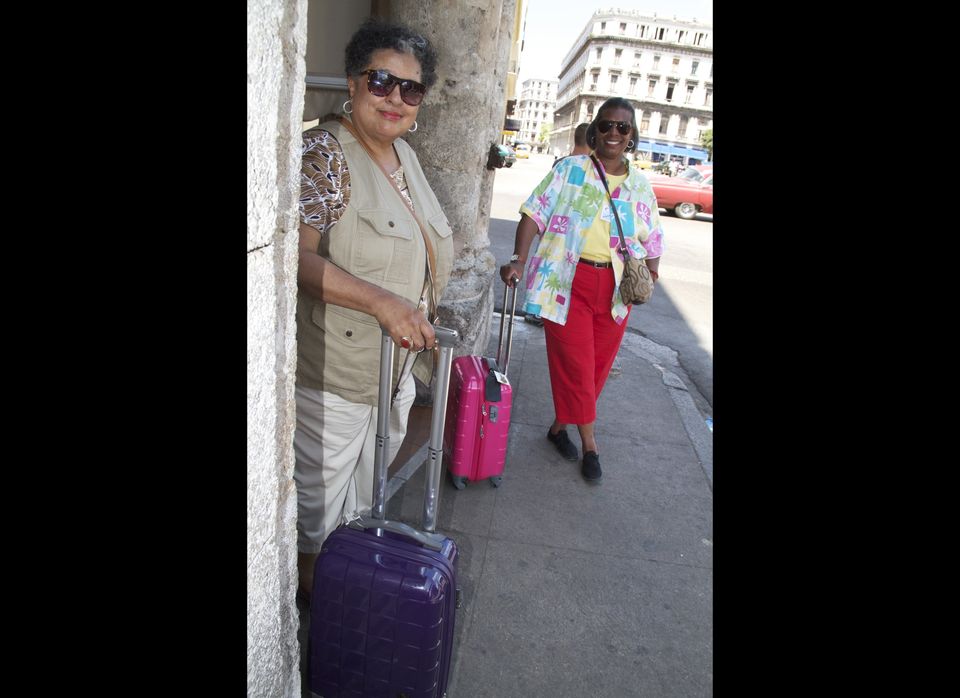 1 / 3
Getting ready to explore the world around us
As hosts of a travel show, we are blessed to have the opportunity to travel the world and meet other people. Here we are near the Hotel Parque Central in Old Havana - excited to be introduced to a new culture with the help of our great tour operators <a href="http://www.friendlyplanet.com" target="_hplink">Friendly Planet Travel</a>. (Photo Courtesy: <a href="http://www.granniesonsafari.com" target="_hplink">Grannies on Safari</a> and Missy DiDonato)